“He doesn’t have a name so death won’t find him!” 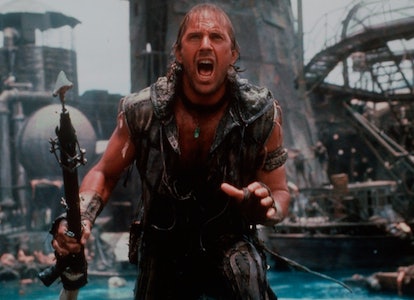 Novelist John Gardner once said there are two types of stories: a man goes on a journey, and a stranger comes to town. Both of these represent interruptions to the status quo, which all good plots are built on. But the best movies make even the status quo an interruption, like this iconic blockbuster, which combines both kinds of stories with a truly chilling dystopian setting.

Waterworld isn’t a perfect movie, but it’s way more fun than most serious film critics give it credit for. It’s also one of the best post-apocalypse adventures streaming on Netflix right now. Here’s why need to watch it before it leaves April 30.

Waterworld is a 1995 epic post-apocalyptic adventure movie starring Kevin Costner as “The Mariner,” a drifting sailor who uses his catamaran to trade goods with others in a future where melting polar ice caps have turned Earth into one big ocean. He comes to a floating community with something incredibly valuable to trade: dirt.

Flush with cash, he encounters Helen, the caregiver for a small girl named Enola with a strange tattoo on her back. Enola’s tattoo is said to be the key to the mythical Dryland, the last remaining land on Earth. The Mariner begrudgingly lets Helen and Enola on board his boat in the search for this place. But, like any good post-apocalyptic film, there’s a rival gang of jet-ski-riding pirates known as the Smokers out to get The Mariner — and Enola.

It’s obvious from the start that Waterworld is meant to be a Mad Max ripoff. The first shot we see of the Mariner is him peeing into a flask, purifying it, then drinking it again. But Waterworld sought to be something more, still with the same heart-racing action, but with a more ambitious setting.

In order to film the many sea battles, production had to build a gigantic outdoor sea enclosure off the coast of Hawaii, which would later be used to film portions of Titanic two years later. At the time, Waterworld’s budget of $175 million was the highest of any film in history.

The result is a flashy movie full of no-holds-barred action and tropes. A pirate king with an eyepatch surveys over his kingdom from the wreck of the Exxon Valdez. The Mariner is held captive as it’s revealed he’s not just a stranger in town — he’s a mutant with gills.

Waterworld is more than a Mad Max ripoff, and more than just another post-apocalyptic story. It’s a return to mythical stories of legendary lands, heroes with powers, wise children who know the secrets of the world, and villains who will stop at nothing to achieve their dastardly vision. Combine that with mid-90s special effects and some scenery-chewing acting (including a young Jack Black) and Waterworld earns a place alongside Titanic and The Matrix as part of ‘90s film canon.

Waterworld is streaming on Netflix in the US until April 30.