"God gave me a gift. I shovel well. I shovel very well." 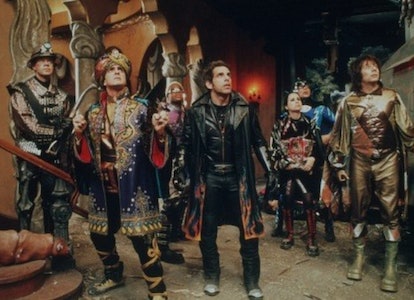 The hot new thing in the superhero genre is not being a superhero. With the rise of TV shows like The Boys and The Falcon and the Winter Soldier, underdog stories of those underneath ultra-sanitized, commercialized superheroes are all the rage. Sure, this could be traced back to anti-hero stories like Watchmen or even some Batman storylines, but this tone has never been shown in such unflinching glory as it was in this 1999 comedy, now streaming on Netflix.

Mystery Men is a 1999 comedy directed by Kinka Usher, a director who, at that point, was most famous for directing Got Milk? commercials. After directing Mystery Men, Usher went straight back to directing commercials. It’s a shame. Put simply, there is no movie like this one, and there never will be one again.

The film follows the events in Champion City, where the most beloved superhero is Captain Amazing. However, crime in the city has gone down so much since he swept the city clean, his corporate sponsors are starting to pull their endorsements. So, Captain Amazing (as his glasses-wearing alter ego Lance Hunt) uses his sway to get supervillain Casanova Frankenstein released from prison, effectively as a publicity stunt.

Naturally, releasing a supervillain doesn’t go well, and it’s up to a ragtag trio of lesser superheroes to save him: The Shoveler (William H. Macy,) Blue Raja (Hank Azaria) and Mr. Furious (a pre-Zoolander Ben Stiller doing his best Wolverine).

Over the course of the film, they pick up more dubiously powered allies like Paul Ruebens’ Spleen, cursed with the power of faint-inducing flatulence, or the underrated Janeane Garafalo as The Bowler, the wielder of a mystical bowling ball containing the skull of her dead father. This all-star cast is rounded out with Geoffrey Rush, Greg Kinnear, Kel Mitchell, and Wes Studi. Just a powerhouse cast on all levels.

The magic of Mystery Men is in the intangible tone of the film. There’s a Joel Schumacher-esque comic book quality to every shot and scene, and the dialogue never takes itself seriously, but underneath all the jokes are unusually rich characters that I ended up caring deeply for. Seeing Mr. Furious talk up his rage for scenes on end only to aimlessly thrash his fists against a bad guy made me genuinely care, and that’s more than countless spoof movies can pull.

In a world where every superhero movie is questioning what it means to be a superhero, this film manages to be both a fascinating answer to that question and a genuinely hilarious comedy thanks in no small part to the heavy-hitting cast. And if that’s not enough to convince you, Smash Mouth’s anthem “All Star” was released in conjunction with this movie, featuring heavily in a training montage. Hey now! What’s not to like?