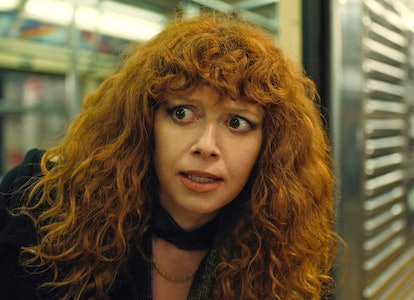 Russian Doll was lightning in a bottle. The combination of time loops, the New York setting, and Natasha Lyonne’s effortless performance led the Netflix season to become a runaway hit that garnered a slew of Emmy nominations. But when Season 2 was announced, the series’ fate remained uncertain. After such a bombastic first go, how do you build on it?

The answer may have arrived in the form of the trailer for Russian Doll Season 2: Time travel.

Even Nadia realizes there weren’t many places for her story to go after her constant deaths in Season 1. “The universe finally found something worse than death!” she exclaims. She boards a train, only to realize she can see ads for Sophie’s Choice and Tab.

It looks like she’s traveled back in time, which she deals with through her usually sordid viewpoint. When someone in a bar says she’s a time traveler, she replies with “I prefer the term time prisoner.”

So what can fans expect from this new season? Well, more of Nadia’s classic wit and humor, but also a new plot device that expands the time loop into decades. Why is she being sent to the ‘80s? Is Alan sent there with her? Will we return to the flashback NYC we saw in Season 1? These are all questions asked by the trailer, but we don’t have to wait much longer until the April 20th release date.

As with all time travel shows, Russian Doll will have to establish how time travel works in its universe. Nadia’s actions may affect her future, something she’ll have to figure out and try to take advantage of. Maybe this is her opportunity to make her childhood better?

Considering Russian Doll’s complex Season 1 plot, fans can definitely expect a season that’s more Dark —as in Netflix’s Dark, the original time travel series that culminated in multiple timelines — than what we’ve seen before. By combining that complexity with Russian Doll’s patented wit and surrealism, this season may just be up to the challenge of matching Season 1.

In a renaissance of multiverses and time travel thanks largely to superhero movies, Russian Doll is coming to stake its own claim on the genre. The only question that remains is what could possibly be done in a Season 3.

More like this
Entertainment
Jan. 30, 2023
Doctor Who Could Become the New Marvel — But There's a Catch
By Ryan Britt
Entertainment
Jan. 22, 2023
The Last of Us Episode 2 trailer teases a big reveal
By Claire Fox
Culture
Feb. 2, 2023
Buck Rogers in the 25th Century’s Most Baffling Change Also Gave Us Its Best Character
By Ryan Britt
LEARN SOMETHING NEW EVERY DAY.
Related Tags
Share: