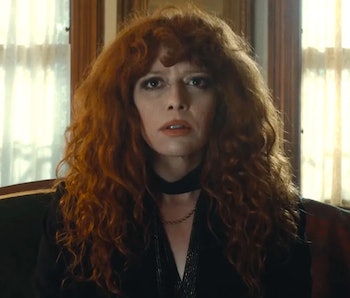 Russian Doll is back with another season on Netflix, and it's an even twistier, trippier ride than the first time around.

In Season 1, Natasha Lyonne's Nadia found herself stuck in a Groundhog Day-esque time loop, constantly dying and reappearing at her chaotic 36th birthday party. When she met Charlie Barnett's Alan, also stuck in a time loop, the pair saved each other from their original deaths and broke the cycle. But, of course, that wasn’t the end. Spoilers for Russian Doll Season 2 ahead.

In the show's second season the time loop is replaced with time travel, as Nadia boards a subway train and disembarks in 1982. In her journey back into her mother's (and grandmother's) past, she begins to unravel an old family mystery. Her grandmother, a Holocaust survivor, lost her fortune during the war. All that remained was a set of gold Krugerrands lost some time in the '80s. Thinking she can restore her family's riches she crafts a plan to steal the gold back, only to ultimately realize that she’s unable to change anything.

Meanwhile, Alan has been visiting East Berlin in the 1960s, when his grandmother was an exchange student from Ghana. He too tries to get the better of time, but also realizes the past can't be changed. And so, by the season finale, both Nadia and Alan are frustrated with the implacable nature of time. As Nadia puts it, "Time's got a real sick sense of humor."

In a last-ditch attempt to use her newfound powers to make a change for the better, Nadia, after giving birth to herself while occupying her mother's body, decides to kidnap herself as a baby and bring her back to the present day. "I'm just going to go ahead and beat time at its own game," she says. "We're finally going to get the mother we should have had — me."

When Nadia arrives back in 2022, she discovers that time has begun to collapse around her. She heads to the hospital in search of Ruth, her surrogate mother, only to find that there are multiple timelines occurring simultaneously. She sees Ruth from a month ago, a week ago, and two days ago, but can't find the present.

Suddenly, she and Alan are stuck back in each other's old time loops from Season One. To make matters worse, Nadia's 36th birthday party is filled with people from other time periods as the timeline continues to collapse. Alan begs her to return baby-Nadia to her rightful time to stop the catastrophe.

When Nadia sees Ruth is doomed to an endless loop of heaving herself up the stairs to get to the party, she finally realizes you can't alter the course of history. So she and Alan head to the subway one last time to set things right.

How do Nadia and Alan fix the break in time?

Nadia and Alan try to find the '80s bound train, but instead end up on a train from the near future. Her friends tell her that Ruth has died, and she missed it.

Nadia dashes off the train, desperately searching for the one that will take her back to the '80s. When two trains collide, she and Alan find themselves in separate rooms filled with waist-deep water seemingly below the subway lines of New York City.

Alan finds his grandmother, who helps him accept his lack of understanding about his family's past. She tells him they're in “the void,” an empty space beneath the city, saying, “There's so much empty space beneath the city we've forgotten about — it's a wonder the whole thing doesn't cave in.” Our lives, she suggests, are built on a fragile foundation. There are so many empty spaces in our understanding of ourselves that it's remarkable our identities don't fall apart.

Nadia also finds the woman she’d been inhabiting — her mother — and she returns baby-Nadia to her rightful place. Finally she accepts that her mother, troubled as she was, is the only mother she could have had. "I didn't choose you the first time, but I guess that's just how the story goes, huh mom?" she says.

What does the Russian Doll Season 2 ending mean for Season 3?

With that done, the timeline is restored. Nadia and Alan return to the present day — a month has passed and Nadia has missed Ruth's death and her funeral, but they're back in time for the wake.

While her journey back into her family's past effectively changed nothing, Nadia learned a vital lesson: That her family history is something she must accept as it is. She returns determined to make the most of her life and to appreciate the time she has while she has it.

As Ruth told her in the second episode, "I need you to be right here with me. Right here, right now. Can you do that?" She’s finally ready to let go of the past and be there for the people around her.

Like Season 1, this feels like a definitive ending for the story Season 2 sets out to tell. While Netflix has yet to announce if Russian Doll will get a third season, it’s fair to assume that anything coming next will be a new story with new time antics. But for now, let’s take a page out of Ruth’s book and enjoy what Russian Doll has to offer right here and now.