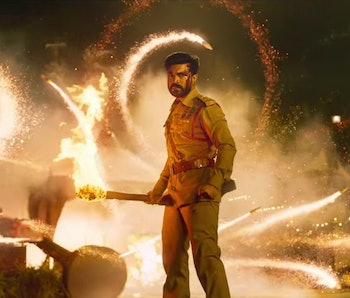 Telugu cinema broke into the American mainstream with RRR, a Tollywood historical action epic following two real-life Indian revolutionaries on a heavily fictionalized adventure. The film had everything: Animal brawls, dance numbers, and a weaponized motorcycle. But where can the story go from here? Director S. S. Rajamouli reveals there is a plan — and it involves many of the same keys to success RRR used.

RRR followed Bheem and Raju, two friends wrestling with their loyalties, pasts, and futures as they fought the British Empire. Now, in a possible sequel, it looks like the duo is poised for a rematch.

According to Rajamouli, a sequel wasn’t part of the plan, but the demand for one has proven undeniable. “When we were making it, we didn’t have an idea about [a sequel],” he told Variety. “With the initial success of it, we discussed a little bit and threw out some good ideas, but we didn’t feel there was a great idea that was worth pursuing, so we left it at that.”

That changed, however, because storytelling is a family affair. Rajamouli’s cousin, who’s on his creative team, pitched an idea that immediately piqued his attention. He then turned to his father, who co-wrote RRR, to expand and develop the idea.

According to Rajamouli, the sequel will see Bheem and Raju join forces against the British Raj again. This makes sense, considering the historical background of both RRR and the real-life revolutionaries the heroes are based on, but it also poses a problem: How many times can these two powers clash without getting repetitive? How will this sequel find new ground to cover?

Still, the British Empire affected every element of Indian society, so there are plenty of potential directions to go in. Maybe the pals will travel to a different part of the country, or deal with an officer trying to avenge the first movie’s villain.

Rajamouli made a three-hour movie where the title card didn’t appear until 40 minutes in. He wrung every bit of spectacle out of RRR’s story, and now he has to do it again. Finding a fresh take on an existing premise is difficult for anyone, but if any director is up for the challenge, it’s him.

RRR is streaming on Netflix.

More like this
Entertainment
Jan. 24, 2023
RRR’s Oscars snub proves the award’s most blatant flaw
By Dais Johnston
Entertainment
Jan. 19, 2023
Netflix's next big sci-fi franchise finally has a release date
By Eric Francisco
Culture
Jan. 12, 2023
Top Gun is remembered for volleyball and jingoism, but it had more on its mind than it gets credit for
By Chrishaun Baker
LEARN SOMETHING NEW EVERY DAY.
Related Tags
Share: