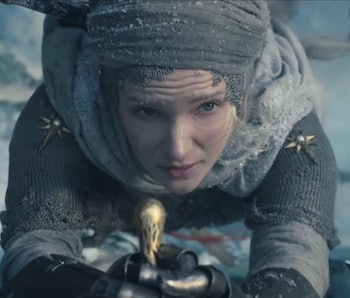 J.R.R. Tolkien fans have learned a lot about The Lord of the Rings: The Rings of Power in recent weeks, but very little about the fantasy show’s villains. Most of the series’ promotional materials have focused on its wide array of heroic characters, including Galadriel (Morfydd Clark) and Elrond (Robert Aramayo). However, there’s a certain Dark Lord who’s been mysteriously absent.

While speaking with Vanity Fair, the show’s writers said they wanted The Rings of Power Season 1 to focus on its heroes, which could explain why Sauron hasn’t been a focus of any of the marketing materials. The only problem is that, as any Tolkien fan will attest, there’s no way to tell many of the show’s best stories without bringing Sauron into the fray.

Therefore, fans aren’t waiting for The Rings of Power’s September premiere to start speculating about the mysterious role Sauron may play in the show’s first season.

Sauron All Along — Many of the leading theories surrounding The Rings of Power speculate that the series will first introduce Sauron as a different character, only to later reveal that the person in question has been the Dark Lord in disguise all along. There are a few different characters fans think could fill that role in The Rings of Power, but there’s one in particular that seems to have caught viewers’ attention.

The character is Halbrand (Charlie Vickers), who’s original to The Rings of Power. Halbrand pairs up with Galadriel when they both find themselves lost at sea in the middle of a storm, but one recent rumor suggests that the character may have a surprisingly nefarious and selfish side to him.

As a result, fans have begun to speculate that he could be Sauron in disguise, or at least one of the Dark Lord’s most faithful servants.

Galadriel’s Greatest Enemy — In order to trick Celebrimbor and his fellow Elven-smiths into forging the Rings of Power with him, Sauron introduces himself to them in the Second Age as Annatar, the Lord of Gifts. So it would certainly be in keeping with his character to have Sauron first show up in The Rings of Power bearing a different name.

Halbrand’s status as an “original” character also means there’s room for The Rings of Power to do whatever it wants with him. If he truly is more nefarious than meets the eye, that makes him a prime candidate to be Sauron in disguise. Sauron, notably, also spends the first 500 years of the Second Age in hiding out of fear of divine retribution for his actions in the First Age. That could be described as Sauron “running from the past,” which is exactly what Vanity Fair reported Halbrand is doing when The Rings of Power begins.

Alternatively, if Halbrand is just a mortal man prone to selfish behavior, that means he could very well end up being one of the Nine Men who become Sauron’s Ringwraiths. In fact, many fans think he could turn out to be none other than the Witch-king of Angmar, Sauron’s second-in-command and the Lord of the Nazgûl.

The Inverse Analysis — At this point, it seems all but certain that Amazon is going to try and keep Sauron’s presence in The Rings of Power under wraps until the show premieres. Given his actions in the Second Age, that likely means he’ll appear for the first time in a different form, which raises the possibility that he could be any one of the “original” characters set to appear in the first season.

Whether or not he’s Halbrand remains to be seen. However, it’s worth noting that Sauron is said to be Galadriel’s number one target when The Rings of Power begins. Having Halbrand, who meets up with Galadriel very early, secretly be Sauron would make the Dark Lord’s eventual reveal land with even more weight.