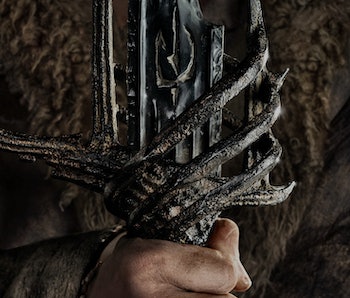 Amazon has resumed its promotional campaign for The Lord of the Rings: The Rings of Power. The streaming service unveiled a new pair of official images from the Lord of the Rings prequel series earlier this week, which spotlights two of the show’s original characters, Bronwyn (Nazanin Boniadi) and Theo (Tyroe Muhafidin).

Amazon also confirmed Theo’s identity as the character who can be seen holding a broken black sword in one of the show’s early promotional posters. He’s holding the same sword in the latest image from the series, and some J.R.R. Tolkien fans believe the item could turn out to be one legendary weapon from the First Age of Middle-earth.

The Theory — Amazon has yet to release any specific details about Theo or his broken sword. It’s clear, however, that the sword is important to Theo’s character in some way, and its broken appearance suggests that its backstory may carry some weight in the show.

Predictably, those details have led many Tolkien fans to begin speculating about the sword’s origins. Some fans even believe that the sword could be Gurthang, the weapon that once belonged to one of the greatest tragic “heroes” that Tolkien ever created, Túrin Turambar.

A Broken Sword — Gurthang was originally known as Anglachel, and was forged from a meteorite by a legendary Elf known as Eöl. However, the sword eventually came into the possession of a man named Túrin Turambar. After Túrin accidentally used the sword to kill its previous master, Anglachel was reforged as Gurthang (meaning “Iron of Death”). The sword was black and was said to have been imbued with the malice of its original creator, which resulted in it achieving an undetermined level of sentience.

After its reforging, Túrin went on to use Gurthang whenever he rode into battle. He famously used the sword to kill the evil dragon known as Glaurung, but Túrin was subsequently struck with a revelation that led him into a suicidal depression. He threw himself upon Gurthang after speaking with the sword, which told him it would “slay thee swiftly” so that it could forget the blood of the innocent men Túrin had killed with it.

When Túrin threw himself upon it, Gurthang broke beneath the body of its final wielder. Its shards were later buried with Túrin’s body, which forces us to ask: Could the sword Theo finds in The Rings of Power actually be Gurthang?

It’s a definite possibility, but it’s still unclear whether the Rings of Power writers have the rights needed to be able to use Gurthang in the show. If they don’t, then there’s no reason to believe Theo’s sword is the same one that was once wielded by Túrin.

The Inverse Analysis — It’s worth noting that the place where Túrin was buried with the shards of Gurthang remained standing even after the end of the First Age and the War of the Wrath. The location later became known as an island called Tol Morwen, which is included in the map of Middle-earth that Amazon originally released for The Rings of Power.

Taking all that into account, there is a real chance Theo could happen upon the broken remains of Gurthang at some point in The Rings of Power. At the very least, the sword he’s holding in these first images definitely looks a whole lot like how one would expect Gurthang to look during the Second Age of Middle-earth.

Unfortunately, only time will tell whether the sword in question is actually Gurthang, or a new weapon created just for The Rings of Power.