“There was no green screen. No blue screen.” 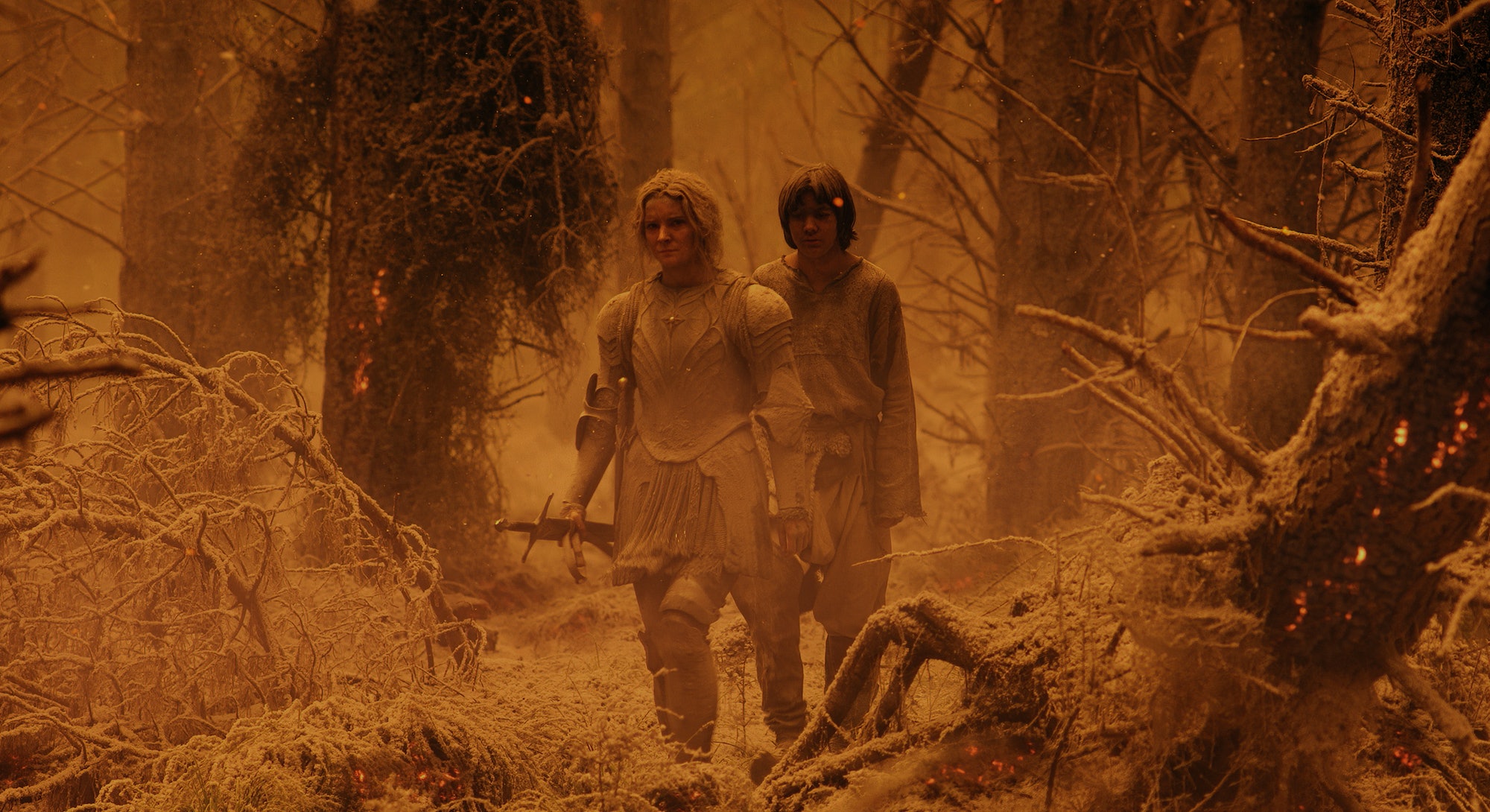 Alex Disenhof had already seen Mordor before he set out to create it for Lord of the Rings: The Rings of Power.

The orange-red sky that looms over Sauron’s domain after Mount Doom belched smoke and fire wasn’t inspired by fantasy or fiction, but was based on a real-life apocalyptic event he experienced.

“I was stuck in a wildfire in Portland in 2020, which I had my own reference images from,” Disenhof tells Inverse. “Those formed the basis of the color that I was going for. This kind of orangey, red, yellow mixture.”

The cinematographer, who was tapped by Amazon to work on Rings of Power Season 1’s two biggest episodes (6 and 7), also compiled images from California wildfires in 2018 to create a visual language for Middle-earth in the aftermath of an apocalyptic volcanic eruption.

But coming up with the concept was the easy part. Bringing it to life without leaning too heavily on CGI was far more difficult.

“It became about, ‘How do we achieve that?’ And how do you create this kind of post-apocalyptic world?” Disenhof says. “There was no green screen. No blue screen.”

To turn the human Southlander town where Episode 6 left off into a post-apocalyptic wasteland, Amazon had to reconstruct the entire location indoors. The team built the village inside a massive old horse barn, digging out the original dirt floors to install stone streets.

Disenhof then surrounded the set with lightweight muslin fabric. “That way, when you layered in a lot of practical smoke, it would just kind of fade to this white that the visual effects department could then take and continue on with abstract shapes.”

“The color of everything is practical.”

Next, he covered the barn’s ceiling with SkyPanels (ultra-thin LED screens used to simulate the experience of being outside) and tested them for weeks to get the right combination of colors and tones.

The only thing that wasn’t done with practical effects? The actual fire.

“The base layer of the image is all practical,” Disenhof says. “The color of everything is practical. What effects did add was the flying embers and other things that weren’t safe to do on stage.”

As complicated as that sounds, it was actually easy compared to the difficulty of filming some of The Rings of Power’s non-human characters. A big chunk of Episode 7 focuses on Elrond the Elf and Durin the Dwarf, which proved to be a logistical nightmare for one obvious reason.

“Both actors are roughly six feet tall,” Disenhof says. “But of course, Elrond needs to look much taller. The set was built to make Durin looks look the correct size for his environment, which meant the actor playing Elrond was incorrect, we needed to scale him up.”

This extremely complicated process involved filming two versions of each scene and then stitching them together. At one point, Amazon even built a second, green-screen version of the tunnel where Elron and Durin are digging for Mithril. It was identical to the original but smaller, to make Elrond look tall.

“We didn’t take the easy road out.”

“Then you’d have to stitch all together,” Disenhof says. “It was actually extraordinarily complex. And if they were to ever hand something to each other, or touch, it just added to the complications.”

When I mention that in an earlier episode, Rings of Power opted to put Durin and Elrond on an elevator together rather than deal with the logistics of a tunnel, the cinematographer’s eyes light up with a mix of frustration and pride.

“We didn’t take the easy road out,” he says. “We were stuck in that tunnel. It was very difficult, but I think we pulled it off pretty well.”

Filming the Harfoots wasn’t much easier. Disenhof and the rest of the team worked for weeks to create the apple orchard where the proto-Hobbits briefly settle in Episode 7. That included ensuring all the sight lines would work — especially with the towering Stranger — and also building an orchard that would look right next to a Harfoot.

One issue? Actual apple trees look too small when placed next to a Hobbit. So Amazon shipped in larger pear trees and covered them in fake, supersized apples.

“So when a Harfoot grabs an apple it’s bigger than our real-life apple, which would be to make them look smaller,” Disenhof says.

I couldn’t let Disenhof go without trying to learn a bit more about the future of The Rings of Power. When I asked if he’s involved in Season 2, which just started production, he responds with a blunt “No comment.” But when I ask what it’s like working on a show filled with so many mysteries, Disenhof offers a more interesting answer.

“There’s very rarely a time where we don’t know where it’s going,” he says. “[Showrunners] J.D. and Patrick are very open about giving us the information we need to make the right choices. We need to know the direction of each character because it may affect how they deliver a line or what they decide to do in a certain scene. So for the most part, we’re in the know, even though the world might or might not be.”

“We need to know the direction of each character.”

Still, Disenhof isn’t immune to reading up on fan theories, and he sometimes wonders if he might be inadvertently pushing audiences.

“There are definitely times where you remember a choice you made on set to do something a certain way that you never intended an audience to take in one direction or another,” he says. “And people glean some interesting conclusions from certain things that you don’t even think would be very significant at all.”