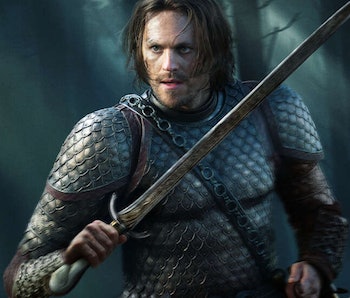 Do you hear it? One musically-attuned fan claims The Rings of Power left an Easter egg in its soundtrack that provides convincing evidence Charlie Vickers’ dashing Halbrand is, in fact, Sauron, the darkest Dark Lord of all Middle-earth.

Ever since his chance encounter with Galadriel (Morfydd Clark) while adrift at sea at the start of Episode 2, there’s been plenty of speculation as to who Halbrand, the supposed “King of the Southlands,” is. Since then, he’s somehow earned the trust of a guarded Galadriel while being imprisoned in Númenor and hiding his “true” regal title from her. He’s shown to be strategic and cunning, as well as reliable in both street fights and full-blown battles.

Halbrand’s skillset and mysterious origins have led some fans to believe he’s either secretly Sauron in disguise, or one of the unlucky men who will eventually become Sauron’s nine Ringwraiths, if not the Witch-king of Angmar himself.

It’s difficult to determine if Bear McCreary’s ethereal soundtrack for The Rings of Power is proof enough for the “Saulbrand” theory, but the Reddit post states that Halbrand must be Sauron because “the first five notes of Halbrand’s theme is the first five notes of Sauron’s theme exactly reversed. In the same key, Sauron is ECDFE and Halbrand is EFDCE.”

“Clever of Bear to change the key and also keep the tracks on the soundtrack album quite far away from each other so it wouldn’t be as obvious,” u/Soundtract added. “But with the amount of thought he’s openly stated he put into every detail of the music, there’s no way this is a coincidence.”

Redditors with more knowledge of film and television scoring provided their own analysis of the “Halbrand” and “Sauron” tracks.

“While I think this is still a very heavy hint from the score, it is notable that Sauron’s theme is more chromatic, so the retrograde equivalence is not quite exact (but real close). Sauron = E-C#-D-F-E, Halbrand = E-F-D-C-E,” another fan argued.

The Inverse Analysis — Could it really be that simple? While this fan theory is certainly entertaining, we aren’t sure if it stands up on its own. However, combined with other elements, it could serve as yet another convincing piece of evidence that confirms “Saulbrand.” Halbrand serves as both a stand-in for Aragorn (Viggo Mortensen) as an alleged messianic ruler of men, and a deconstruction of the Aragorn persona. Who could possibly be more anti-Aragorn than Sauron himself?

Some fans are hoping Halbrand instead turns into one of the Nazgûl, which would be a compelling way to show how far the mighty fell when gifted the Rings of Power. Halbrand’s descent would be particularly chilling given the pains Rings of Power has taken to make him seem heroic.

“Writing backstory for the Nazgûl is the one big no-brainer thing the show can do. It’s got no precedent in lore so they’re more flexible in their choices, yet almost everything they could come up with would be cool,” a fan said. “If they’re not setting up a Nazgûl in favor of doing a Sauron fake-out that would be really stupid.”

While the answer to the Sauron riddle may not be as easy to see (or hear) as we’d like, we can at least enjoy Bear McCreary’s epic score as we await Episode 7 of The Rings of Power.

The Rings of Power streams Fridays on Amazon Prime Video.