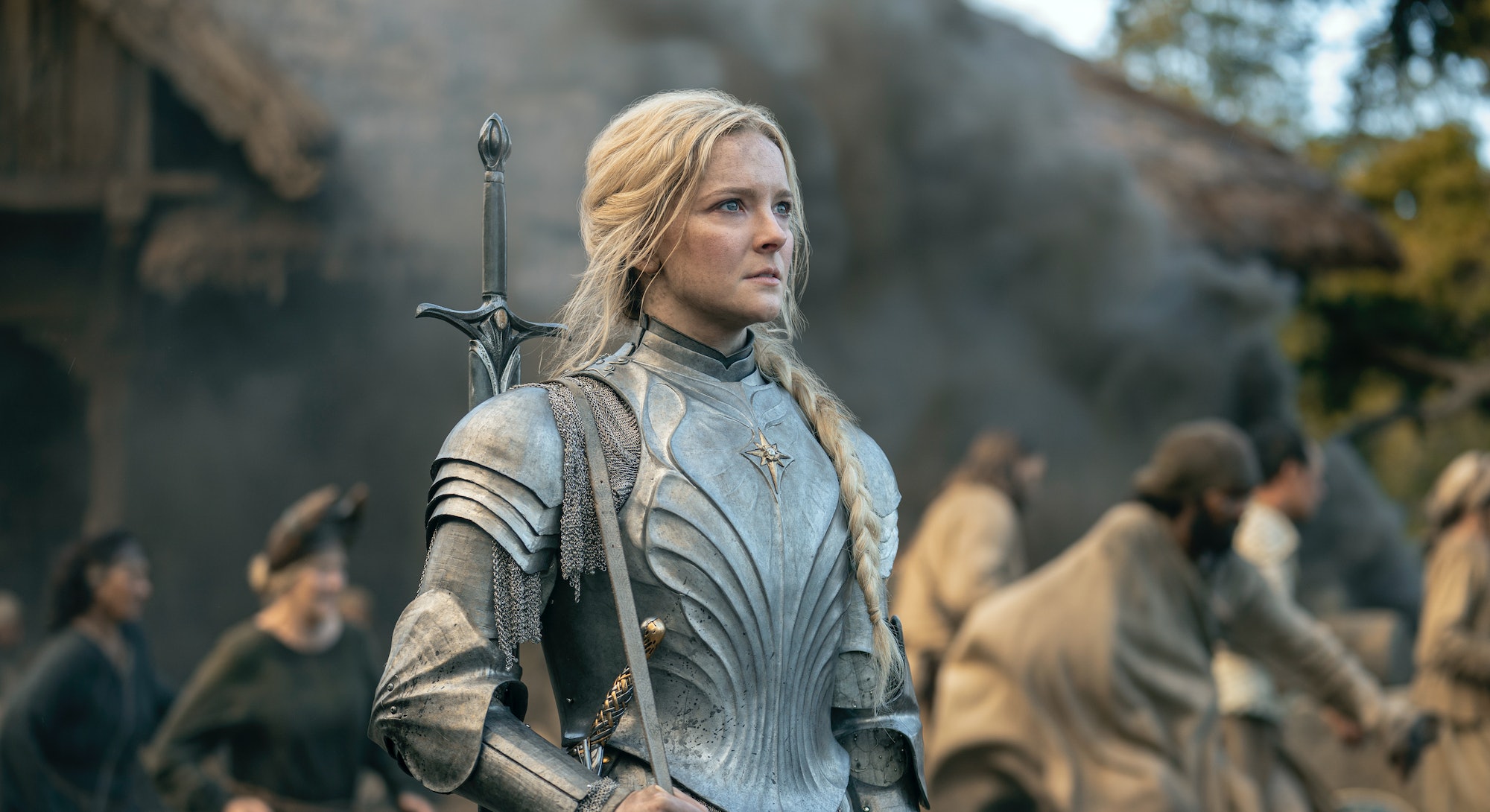 In a previous life, Vic Armstrong wore the jacket and fedora as the one and only Indiana Jones.

Now, the Hollywood veteran and former Harrison Ford stunt double commands an army as the leading stunt coordinator on Amazon’s The Lord of the Rings: The Rings of Power.

Despite honing his expertise through cinema’s greatest action heroes — from Spider-Man to Superman to James Bond, just to name a few — Armstrong tells Inverse the bar for cinematic action can always be raised just a little higher.

“Every stunt has been done in some shape or form,” Armstrong says. “It’s putting an original edge on it, a little bit of jazz, and coming up with something original. I’ve said over the years, the hardest stuff I’ve done in movies is being original.”

For The Rings of Power, Armstrong took on the series’ most visually ambitious and action-packed installment yet — Episode 6, “Udûn” — and gave it all he’s got.

“It's one of my favorite episodes,” he says. “I've been involved with it from the very beginning, and then, when [episode director] Charlotte [Brändström] arrived, we teamed up. I think it's superb. It's got a big-screen quality.”

In an era where the line separating cinema and television is blurrier than ever, Vic Armstrong sees things holistically. “I never look at it as TV or film or anything,” he says. “When I look at anything, I see it in 240. Wide lens. I look at the overall picture.”

In a conversation with Inverse, Armstrong breaks down some of the wildest — and most spoiler-y! — moments in The Rings of Power’s epic sixth episode, including surprise cinematic influences and hints of foreshadowing that will demand fans take a second look.

Warning: Spoilers for The Rings of Power Episode 6 ahead.

The world of The Lord of the Rings: The Rings of Power, lifted from the writings of J.R.R. Tolkien, isn’t just populated by dumpy humans. There are athletic elves, heavyset dwarves, and the monstrously powerful (but slower) orcs that populate Middle-earth.

The first order of business for craftsmen like Armstrong is to always consider who is moving — and how. “That’s one of the things we spend a lot of time and effort to get correct,” Armstrong says. “If anything’s out of kilter, if somebody doesn’t move correctly, it looks wrong.”

“Arondir, for instance, we’ve worked hard on him to make him fluid and athletic when he fights the orcs. When he comes off the roof, we wanted that to be a one-er, an all-in-one shot where you see him come off the roof, hit the ground, and fight the orc.”

Armstrong admits it’s common practice to “steal from other movies.” In Arondir’s fight with the orc, the stunt coordinator stole from his own experience on Raiders of the Lost Ark. To contrast Arondir’s physicality versus the lumbering orc, Armstrong referenced Indy’s iconic fight with the Nazi mechanic.

“I stole off Raiders of the Lost Ark with Harrison Ford fighting the big German around the revolving aeroplane,” Armstrong says, “Arondir fighting the orc, where the orc doesn’t move as fluidity as Arondir but he does move. And Arondir hurts when he gets hit. It makes him vulnerable, like Harrison was. And then you feel for the characters.”

Adds Armstrong: “We don't just go in there and say, ‘Smash him and punch him.’ There is a stylization to how they deliver the blows, and the reaction when people do get hit. You have to think about it a lot. It's very important to get the texture and personalities of what Tolkien was talking about with these characters.”

And the horse you rode in on

Galadriel, played by Morfydd Clark, has been one of the most capable heroes in Rings of Power. This characterization stems from Tolkien’s writings, where she was the mightiest and fairest of all the elves.

As the Númenor army charges into the village, there’s a slick moment when Galadriel dodges an arrow whilst clinging to her horse and then slices a dude in half. Armstrong says that technique wasn’t borrowed from cinema but from real-life Cossack riders.

It gives her an edge of — not super powers — but talent and style that the other people don't have.”

“They really live and die on horseback. They're circus-like,” Armstrong says. “Horseback riding, how you do it, is a fundamental skill. But there’s people that enhance those skills. Like a cowboy, the horse becomes an extension of him. This is the same with Galadriel, using her skills as if she’s in the buzkashi games like we did on Rambo III.”

“Galadriel has a fluidity of riding,” adds Armstrong, “It’s these talents we take from around the world and inject into her so she has above-and-beyond call-of-duty skills. It gives her an edge of — not super powers — but talent and style that the other people don't have.”

It’s safe to assume one of the hardest parts of making an episode like “Udun” is logistics. How many horses? How many prop swords? How many extras? While this is true, one of the other hardest elements was timing. More specifically, the timing of sunrise.

“Not a stunt per se, but when the Númenorians come charging in on horseback, that had to be shot within 15, 20 seconds of the sun coming up over the hillside,” Armstrong says, when questioned about one of the hardest things to get right for the episode.

It wasn’t just timing with the sunrise that proved daunting, either. “We’d been up since four in the morning, rehearsing in the dark, with all the riders and everything. The [camera] drone has to come up and reach the crest of the hill. And there’s mist in the air, in the summer. That was tough. For me, technically, it was very difficult to get.”

One of the more devastating twists in the episode was the reveal that the villagers weren’t actually fighting orcs, but their own fellow neighbors in disguise. (Recall that a large portion abandoned their fellow humans to join the orcs an episode prior.) Armstrong says that, in repeat viewings, it’s a dead giveaway that the “orcs” the villagers are initially fighting aren’t actually orcs, based on the human-like way they move.

“They're fighting much more fluidly and much more human-esque than the orcs.”

“They're fighting much more fluidly and much more human-esque than the orcs,” Armstrong confirms. “One hundred percent, there was a difference, and I think it’s a great reveal. When you think, ‘Oh my god, they’re our neighbors.’ When they come rushing out of the woods, they do look different [than orcs].”

Naturally, an episode like “Udûn” raises comparisons to the iconic Helm’s Deep in The Two Towers. But Armstrong wasn’t trying to let the stature of Helm’s Deep intimidate him.

“They’re epic and they're great in their own right. Subconsciously, in my mind, I was trying to make us more organic,” Armstrong says. “[Give it] less of a feeling of CG.”

While there is plenty of CG work in “Udûn” — Armstrong nods to the falling tower that gives the villagers an early advantage, which was done as a VFX shot — he still strove for tactile elements where possible, and the marked difference in scales that separate Helm’s Deep and “Udûn.”

“I just tried to make it more organic, as real as I could, scale-wise. Not massive. Just realistically scale,” Armstrong says. “I wanted the violence to look real. I was doing Gangs of New York. I tried to get those sort of flavors, and I think it gives us a much different look and framing.”

Like The Green Hornet, Armstrong says The Rings of Power is about “taking reality and stretching it 15, 20 percent.”

The Green Hornet and sidekick Kato aren’t superpowered miracles, but masked vigilantes whose origins lie as pulp anti-heroes from Depression-era radio shows. But the grounded way Armstrong approached the 2011 action-comedy, which starred Seth Rogen in the lead role, is how Armstrong’s also approaching The Rings of Power.

“I had a great time on The Green Hornet. My family were on it getting blown up,” laughs Armstrong. “There are similarities. The action is just taking it over the edge, away from reality but keeping it believable. You do it with James Bond, with Indiana Jones, with Green Hornet. We’re not going into crazy Marvel scenarios. It’s that fine line and I love playing with that.”