“None but the King of Gondor may command me!” 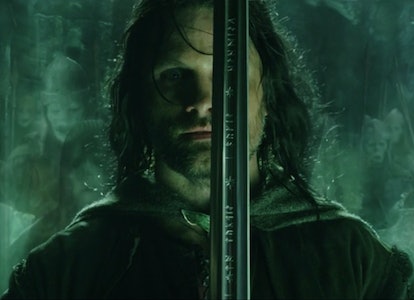 While The Lord of the Rings trilogy tells a self-contained story, it frequently references people, places, and events from hundreds of years before Frodo begins his trek to Mordor. That’s why The Rings of Power, Amazon’s upcoming Lord of the Rings prequel series, is so appealing.

The upcoming TV show not only offers J.R.R. Tolkien fans the opportunity to return to Middle-earth, but the chance to see many key events in the world’s history be brought to life for the first time. That includes a conflict that ends up playing a major role in Lord of the Rings: The Return of the King.

The Way is Shut — In The Return of the King, Aragorn leads his party into the Paths of the Dead to call upon the aid of a group of ghost soldiers who have been trapped in their mountains for thousands of years. The ghostly army accepts Aragorn’s call and ultimately plays an instrumental role in helping the forces of good defeat Sauron and the armies of Mordor.

But there’s a reason the army of the dead are there when Aragorn calls upon them, and it all has to do with his ancestor Isildur, who cut the One Ring from Sauron’s finger but failed to destroy it. Isildur has already been confirmed to be one of the central characters in The Rings of Power, which means the Amazon series has the chance to show the origins of The Return of the King’s cursed army.

Fulfill Your Oath — After Gondor is founded in the Second Age of Middle-earth, Isildur goes to the White Mountains to meet with the king of the men who reside in the region. For a long time the mountain men worshipped Sauron, but Isildur convinces their king to swear allegiance to him and Gondor. However, when they are actually called upon to fight with Isildur, the mountain men refuse. They hide in their mountains, abandoning their oath.

In response, Isildur curses them to live without rest until the day comes when they finally fulfill their oath to him. So when the army comes to Aragorn’s aid in The Return of the King, their curse is lifted and they are allowed to move on from the mortal world.

With Isildur set to play a major role in The Rings of Power, it seems all but certain that Isildur’s interactions with the men of the White Mountains will be covered at some point in the Amazon show.

The Inverse Analysis — One of the most exciting things The Rings of Power has the potential to do is redefine the way many Lord of the Rings viewers see Isildur. By spending time with him both before and after the fall of his home, the great island kingdom of Númenor, the series can make viewers see Isildur as the hero he was before he fell under the influence of the One Ring, rather than just as an arrogant man.

Not only should the series’ exploration of Isildur make watching his downfall at the start of Peter Jackson’s Fellowship of the Ring a much more complicated experience, but it should also make watching Aragorn recruit the army of the dead in Return of the King an even more epic moment.