"The community built the show, and we respect those who made it. We're just coming in to play." 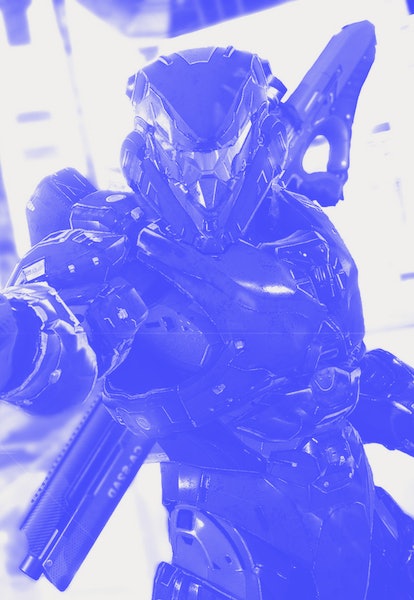 For the first time in 17 years, Red vs. Blue is changing gears.

The cult sci-fi comedy from Rooster Teeth, the production company with a rabid online following founded in 2003, has a new director in Torrian Crawford. The 31-year-old animator from Detroit is giving the cult web series a major tune-up for its 18th season, which premiered November 9.

Comparisons to the billion-dollar Fast & Furious are unusually apt. Besides an emphasis on complex choreography, Crawford's story for the Red vs. Blue series— a comedy that famously appropriates material from the Halo video game series — is not unlike the 2019 spin-off Hobbs & Shaw.

The new season, titled Red vs. Blue: Zero, follows a group of oddball soldiers who unite to save the galaxy from a strange enemy known as "Zero."

"We have a new cast, but two [characters] from Red vs. Blue hang out and have adventures with them," he says. "We wanted a jumping on point, a refresher for new people to come in."

The director avoids using words like reboot or remake, instead calling it a "restart" before admitting that not every fan will take kindly to such big changes.

"With any long-lasting property, there has been apprehension [from fans]." he says. "The community built the show, and we respect those who made it. We're just coming in to play."

But Crawford is no outsider. He's been at Rooster Teeth since 2014, where’s animated and directed episodes of DEATH BATTLE (where pop culture characters are pitted in a theoretical deathmatch) and gen:LOCK, a giant robot anime produced by and starring Michael B. Jordan.

And prior to his employment, Crawford was a fan. He cites the late Rooster Teeth animator/director Monty Oum, who died in 2015 of a severe allergy, as his biggest influence. "[He] opened my eyes: This could work. I could do this. I don't have to be a karate master to be a great filmmaker."

In 2003, a group of gamers in Texas created Red vs. Blue for a pre-YouTube internet. Its popularity, emblematic of the “machinima” art form, enabled its creators to establish Rooster Teeth. Today, it is a subsidiary of WarnerMedia’s Otter Media and produces personality-driven content like animation, comedy sketches, podcasts, movies, and livestreams. It also runs RTX, a series of annual conventions; in 2018, RTX attracted 65,000 fans who gathered in Austin.

After 17 years, Red vs. Blue still has an engaged audience — its previous season has a combined 2.4 million views on YouTube — but any show almost old enough to vote can be guilty of spinning its wheels.

"I saw how last season ended, and I had an idea," he says. "I'm an action guy, and my pitch was to do an action-adventure. They said yes. They were looking to do something different. I felt it could use an injection of something more.”

Adds Crawford, “What was there was solid. We could have went on doing that, but I was curious if there was a way to [to do] something else. I saw an opening."

Hailing from Detroit, Crawford grew up on a steady diet of action movies. "I remember going to the local strip mall getting kung fu DVDs from a guy next to Dunkin Donuts," he says. "Before animation, that was my jam." After dropping out of animation school at the now-closed Art Institutes of Michigan, Crawford taught himself using online tutorials and leftover textbooks.

When Red vs. Blue wrapped its season in 2019, Crawford gave his pitch for a new direction to series co-creator and Rooster Teeth Chief Content Officer, Matt Hullum.

"It was as simple as me going to an office with Matt Hullum. I told him, 'I want to direct Red vs. Blue.' He told me ideas, and at the end, I was the director."

"I've been a huge fan of Torrian," Hullum tells Inverse. "I was thrilled when he approached us with his own take, which he saw as Fast & Furious meets Looney Tunes. He loved when the show was so fast and so funny you could barely keep up with the action from laughing.”

Along with tighter action comes cleaner humor, a departure from the show’s known vulgarity and South Park-flavored raunchiness. Red vs. Blue isn’t softening for a younger audience, Crawford insists, "but we are making the show sillier." He describes Red vs. Blue: Zero as the PG-13 sequel of an R-rated franchise.

"It's like a Saturday morning cartoon,” he says. “You get your biggest cereal to watch Power Rangers. A lot of the older stuff was great. It was raunchy and adult, and that's fine. We're not doing that because we're hyper-focused on the action."

The new tone of Red vs. Blue follows a bigger shift at Rooster Teeth. On August 7, citing a commitment to inclusion, the company announced a review of its content library to remove or edit offensive material. "We took an honest look at 17-plus years of videos, and concluded some do not fit the values of Rooster Teeth today," the company said in a statement.

Crawford's stewardship of Red vs. Blue predates many organizations (including Rooster Teeth) that spent 2020 reckoning with systemic racism and internal imbalances of power. Work on Zero started in January 2020. But Crawford’s position is no less pivotal, as he becomes the first Black director of a show in the company's nearly 20-year history.

"I was taught from a young age to work twice as hard just to be considered even," he says.

Race is not explicit in Red vs. Blue — no one can see skin color beneath bulky power armor — but Crawford says being Black in animation pushed him to sit in the director's chair of a major animated series.

"That's fueled this work ethic I have. Whenever things are bothering me, or the world is crazy, I lean on my work. I power through,” he says. “A lot of my self-teaching was pushing really hard and that's what you're to do because of the world around me."

In some ways, Red vs. Blue has returned to its roots. Because of the Covid-19 pandemic, the show is again produced out of Xboxes and computers inside people's bedrooms, just as it was in 2003. The only difference now are the tools to make it, and who’s making it.

"We have better technology," Crawford jokes. "But it does feel like a bunch of friends making stuff we're passionate about."