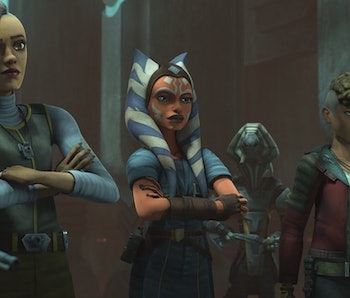 Sorry, but Rebels Season 5 isn't happening, despite some rumors to the contrary. Here's what that means for the future of Star Wars and Ahsoka Tano.

In a new interview with Deadline, Dave Filoni, the animator, writer, and director who shepherded The Clone Wars, Rebels, and Resistance, has opened up about what comes next now that the Clone Wars has finished. Will he rush into a new animated project? According to Filoni, the answer is, nope:

"I couldn’t speak to anything at this point. I have a lot of ideas and I’m really fortunate that I’ve had the opportunity now to work in both animation and live-action, so just getting that exposure is interesting. First, for me, there’s a story and then I have to decide what’s the best medium, and I think there are certain avenues open to me at this point. Right now I’m really enjoying the collaboration I have with Jon Favreau on Mandalorian. We’re having a great time making that show, and you know, we’ll see."

Filoni also stopped short of outright confirming Rosario Dawson appearing as Ahsoka in The Mandalorian Season 2, but did talk about Ahoska's popularity at length, saying that he thought the secret to her success as a character was fairly simple: "I think people like Ahsoka because they relate to her."

That, said, if Ahsoka is really returning to Star Wars, it won't be in animated form, because The Mandalorian is, at the moment, Filoni's only focus.

In addition to his work with Star Wars animation, Filoni is also a producer on The Mandalorian and made this live-action directorial debut on the series. (Filoni also appeared as an X-Wing pilot in episode 6, alongside other Mandalorian directors Rick Famuyiwa and Deborah Chow.) So, other than Forces of Destiny and Galaxy of Adventures, Filoni has been the primary point-person for big animated Star Wars projects. So, if he's focused only on The Mandalorian it probably means there aren't any new big animated projects coming from Lucasfilm right now.

Of course, other folks could be developing animated Star Wars series, but if those shows are going to crossover with Rebels, Clone Wars, or Resistance, it seems like Filoni would need to be involved at some point. If he's saying it's all Mando right now, then it feels like new Star Wars cartoons aren't coming for quite some time.

This can change, of course. Back in 2015, nobody expected Season 7 of The Clone Wars to ever happen. And look where we are now. Maybe the best way to think about new Star Wars cartoons is to listen to one of Yoda's most underrated pieces of advice: it's time to learn some patience.

The Clone Wars is streaming now on Disney+.