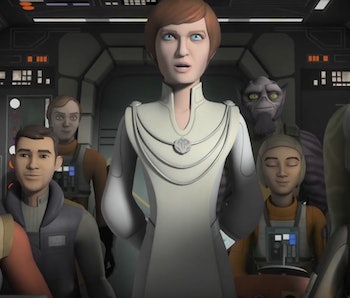 It's been three years since fans of Star Wars Rebels got any new episodes to dive into. The animated series debuted in 2014 and was created by George Lucas acolyte Dave Filoni (who's also been an integral presence on Disney+ with original series The Mandalorian, Star Wars: The Clone Wars, and The Bad Batch), Simon Kinberg (Dark Phoenix), and Carrie Beck. Star Wars Rebels is set five years before the events of Star Wars: Episode IV — A New Hope. Since Season 4's wrap in 2018, Filoni has confirmed another season won’t happen. But with the return of The Clone Wars on Disney+ in 2020, anything seems possible.

Even though Filoni maintains the Season 4 finale was also the series finale, there's still a chance the show could come back for Season 5. Here's what we know about a possible fifth season so far.

When will Star Wars Rebels Season 5 arrive on Disney+?

With no renewal, we do not know when or if Star Wars Rebels Season 5 will premiere.

Who is in the Star Wars Rebels Season 5 cast?

There have been no announcements on which Star Wars Rebels voice actors would be back for Season 5. Based on how Season 4 ended, we would expect at least our core Star Wars Rebels cast to return, including: Taylor Gray as Ezra Bridger; Freddie Prinze Jr. as Kanan Jarrus (who perished during Season 4 but could appear in flashbacks); Vanessa Marshall as Hera Syndulla; Tiya Sircar as Sabine Wren; Dave Filoni as Chopper; Steven Blum as Zeb Orrelios; Dee Bradley Baker as Captain Rex; and Askley Eckstein as Ahsoka Tano.

While Season 4 ended with Ezra's future in doubt, his omission from a scene in The Rise of Skywalker featuring multiple (mostly) dead Jedi suggests he's still alive somewhere in the galaxy. However, according to that earlier rumor Rebels Season 5 would instead focus on Ahsoka and Sabine as they set out on a new adventure

What is the plot of Star Wars Rebels Season 5?

We don’t know where Star Wars Rebels Season 5 would be going. But we could guess where the story could be headed based on how Season 4 concluded with the two-part finale "Family Reunion - and Farewell."

Season 4, the ostensible finale of the Star Wars Rebels saga at the time it aired, ending on a variety of interesting notes. The biggest question Season 4 leaves fans with is what happened to Ezra and where did he go after that final episode. After spending three seasons finding his place in the rebellion against the Galactic Empire, honing his Force abilities, and becoming a Jedi with the help of his mentor Kanan Jarrus, Ezra finally had the power to both resist temptations from Palpatine to come to the Dark Side and help free his home planet of Lothal. In a final showdown against Rebels big bad Grand Admiral Thrawn, Ezra used the Force to summon the Purrgil, those giant purple whales who can travel through hyperspace, and the Loth-Wolves to take out Thrawn and his army. He then had the Purrgil jump back into hyperspace, taking Ezra, Thrawn, and the entire Imperial fleet with them.

Additionally, Season 4 ended with the crew of the Ghost, who we followed since the beginning of Rebels, going their separate ways. Sabine embarked on a new mission with Ahsoka to find Ezra, who disappears after the showdown with Thrawn. Hera and Rex keep fighting as members of the Rebel Alliance, fighting in the Battle of Scarif (as seeing in Rogue One: A Star Wars Story) and the Battle of Endor. Thanks to a time jump, it was also revealed that Hera gave birth to her and Kanan's son, Jacen.

Even though the ending of Season 4 was considered the conclusion to the Star Wars Rebels story, its time jump into the future and the wealth of possibilities to show the events of the Skywalker saga from a different point-of-view (namely, through the eyes of the remaining Rebels characters) would be a really exciting direction to take the story and Star Wars in general.

Is there a trailer for Star Wars Rebels Season 5?

There is currently no trailer for Star Wars Rebels Season 5. In the meantime, longtime fans of the show can refresh their memories with an official recap of Seasons 1 to 3, courtesy of Star Wars.

Additionally, if you're looking for a recap which includes the most recent season, 2018's Season 4, you can check out the recap provided by YouTube fan channel MovieFlame. Or just rewatch the entire thing on Disney+.

Because the events of Star Wars Rebels take place before A New Hope, there has already been some overlap with that original trilogy as well as the prequel trilogy. Iconic Star Wars characters including Leia, Obi-Wan Kenobi, Darth Vader, Darth Maul, Palpatine, R2-D2, and C-3PO have all appeared on Star Wars Rebels over the past seasons. Additionally, Season 4 overlaps with the events of Rogue One: A Star Wars story, including showing Rebels characters like Hera during the Battle of Scarif.

Seasons 1-4 of Star Wars: Rebels are currently streaming on Disney+.

More like this
Entertainment
3 hours ago
Ahsoka will be different from The Mandalorian in one important way
By Alex Welch
Entertainment
5.14.2022 10:31 AM
Obi-Wan Kenobi could bring back an iconic Star Wars character
By Dais Johnston
Entertainment
5.12.2022 10:30 AM
Darth Vader's lightsaber fights in Obi-Wan might look sick as hell
By Eric Francisco