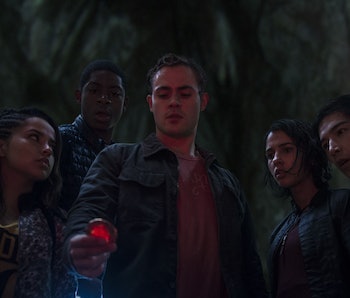 “When all this is over, are we Power Rangers? Or are we friends?”

In 2017’s Power Rangers, from director Dean Israelite, five teenagers with nothing in common beyond circumstance talk smack about parents, school, and their ancient alien mentor over cold beers and a warm campfire. Superhero movies are at their best when the impossibly gifted main characters talk and act like real humans, but in Power Rangers the vibes are transformative.

Five years ago, when superhero movies were on the cusp of maximum cultural firepower, Power Rangers came and went like a breeze. A reboot of the campy ‘90s TV show — one that infamously adapted an import Japanese sci-fi and stuffed it into Beverly Hills 90210 — Power Rangers failed to capitalize on its advantages as an established IP with cross-generational appeal. With a worldwide gross of $142 million, couch change in the Burbank offices of Marvel Studios, Power Rangers bombed in epic, embarrassing fashion. But there was something beautiful in the wreckage.

Like teenagers themselves, Power Rangers is messy, scatter-brained, a bit stupid, and terribly misunderstood. While even those who financed the film believed it to be another superhero franchise-to-be, Power Rangers is better seen as the young adult drama it actually is. That the film was distributed by Lionsgate, whose success was built on blockbuster adaptations of Twilight and The Hunger Games, only deepens the YA aesthetics. Bella and Edwards’ rainy hometown of Forks, Washington sure looks a lot like the overcast Angel Grove.

While the climax is a fireworks display of an oversized commercial for Bandai toys and Krispy Kreme, Power Rangers spends the majority of its time on the friendship of not-so-mighty morphin’ adolescents. In defiance of saccharine YA of the John Green variety, Power Rangers posits that angst and apathy aren’t negative attributes to shake off but necessary emotions to harness. They’re mandatory phases that prelude the ultimate metamorphosis: Growing up.

As a moody PG-13 film Power Rangers doesn’t resemble the TV show, but its logline premise does: Five teenagers from Angel Grove transform into superheroes and save the world from Rita Repulsa (Elizabeth Banks). In the TV show, Zordon summons “five overbearing, over-emotional teenagers.” What he gets are five magazine-worthy role models. There are episodes where the Power Rangers volunteer for park clean-ups and big brother programs.

The 2017 film instead centers on slackers, misfits, and people who’ve royally screwed up. Jason (Dacre Montgomery) is a disgraced football star. Trini (Becky G) is closeted. Kimberly (Naomi Scott) sacrificed a friend’s trust for the cheap thrill of gossip. They’re all teenagers caught up in their crap. The Angel Grove kids of 2017 are more relatable than aspirational.

They’re also not friends. The show began with the heroes already buddies, but in the film they meet in Saturday detention. The film implies it’s written in the stars. “Find those who are worthy,” says Zordon (Bryan Cranston, also a veteran of the TV show) enchanting the Power Coins in the prologue. Eons later the coins find the five teens, or the teens find them. The union feels like both fate and coincidence. Either works. Don’t we all feel the same about our closest friends? Happenstance bridges connection, but our willingness to maintain relationships feels like it was always meant to be.

Speaking to its characters’ rebellious spirit, Power Rangers looks nothing like the 1993 show. Specific design choices still feel misguided after five years; when powered up, none of the Power Rangers are distinguishable, and the alien design of their armor and machines feels, well, alienating. But the principle idea is transgressive. In its initial release the defiance read as though the filmmakers were embarrassed of what they were tasked with adapting. Now, when even Star Wars has surrendered to the minutiae of nostalgia, there’s an appealing draw in how Power Rangers seeks its own path at the cost of marketability.

The alien look of the Power Rangers’ costumes emphasizes the film’s celestial qualities. In the movie’s most touching scene, the Rangers carry the body of their fallen friend, Billy (RJ Cyler), who embodied their shared joy and soul. Kimberly finds in Billy’s jacket a silly doodle they made, and that’s when I lose it. I’m reminded of little notes and mementos from my own friends I’ve kept and miraculously never lost. In my arm’s reach there’s a homemade birthday card from a former editor, in which she celebrates positive attributes I never saw in myself. It never fails to make me smile, especially on harder days.

An ethereal cover of “Stand By Me” by Bootstraps, which replaces bass strings and triangle dings for pipe organs and a choir, scores the Power Rangers’ loss, despair, and desperation to be the heroes they didn’t know they could be. Bootstraps notably brings Ben E. King’s iconic 1961 single back to its religious roots. In composing the original, King was inspired by Charles Albert Tindley’s 1905 gospel hymn, itself a reinterpretation of Psalm 46:2. Power Rangers doesn’t traffic in heavy Christian symbolism like Sam Raimi’s Spider-Man 2 or Zack Snyder’s Man of Steel, but there’s an underlying touch of spiritual cleansing in Power Rangers.

To access their headquarters, the Power Rangers swim through a cavernous pool. They come out sopping wet, like baptism. When Zordon speaks their illuminated faces look upward, camera tilted high, taking the place of a booming voice. They look like they’re in prayer. When Billy comes back to life he expels water from his lungs. The resurrection of Lazarus contains the shortest phrase in the King James Bible: Jesus wept.

To Power Rangers, the transformative experience of friendship and adolescence is the same as a superhero origin story. It takes faith and trust to vanquish evil. It’s basic screenwriting for characters to change, but in Power Rangers it is especially pointed. These ragged teenagers are not the same in the end as they are in the beginning. They’re still in detention, but now they have armor in each other. To quote Alpha 5 in the original show: They’ve gone through a metamorphosis. May we all have friends willing to change with us.

More like this
Culture
Jan. 25, 2023
Hansel & Gretel: Witch Hunters is a flashback to the strange excesses of 2013
By Mark Hill
Entertainment
Jan. 25, 2023
Here’s why the Invincible movie won’t be The Boys redux
By Mónica Marie Zorrilla
Entertainment
Jan. 20, 2023
Is Jason Momoa playing Lobo? The Aquaman actor drops a huge DC clue
By Eric Francisco
LEARN SOMETHING NEW EVERY DAY.
Related Tags
Share: