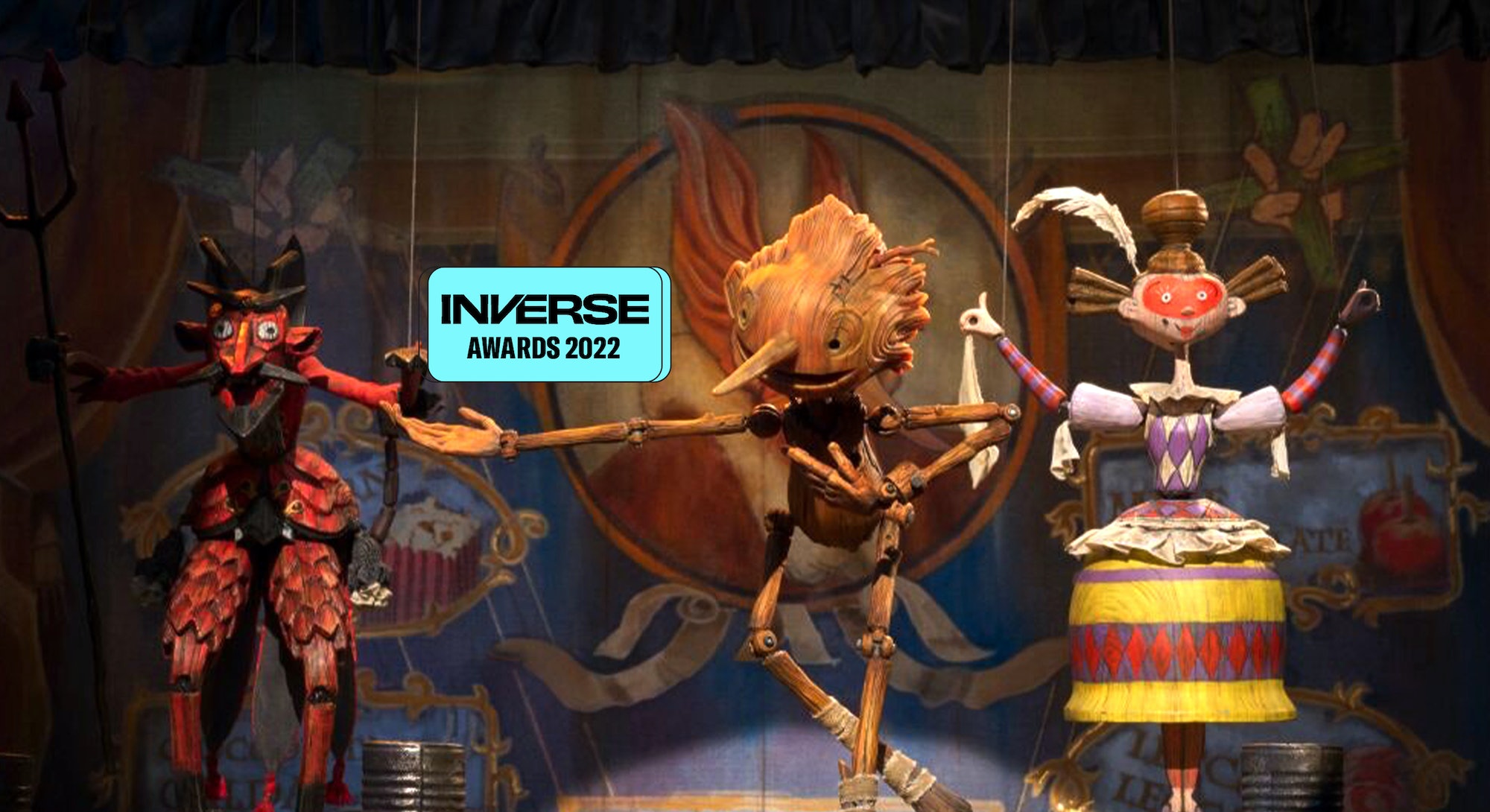 Patrick McHale wasn’t sure about Mussolini.

“Guillermo really wanted to do it,” McHale tells Inverse. “He’s very confident in just going for things. So I kind of just followed his whims.”

Like del Toro, Patrick McHale knows how to craft an arresting atmosphere. The creator of Over the Garden Wall and creative director of Adventure Time’s first five seasons, McHale is a master of balancing joy with more mature themes. He’s also quite talented at sneaking in musical numbers that never feel annoying or out of place. So it’s no surprise that Guillermo del Toro chose him to co-write the script for Pinocchio.

“The plan was to do 20 pages by me, 20 pages by him, and go back and forth,” McHale says. “But whatever new ideas I had would inspire him to find new ideas as well. And we evolved in that way.”

“Fascism is something that Guillermo brought up that has interested him a lot in his work.”

Be warned, this is not the same “Pinocchio” you know, even if it is a story we’ve seen time and time again. Set in Italy during the 1930s, with fascism on the rise, the film tells the story of the wooden puppet who comes to life. But del Toro and McHale focus more on the relationship between Geppetto and his wooden son. These are flawed characters living in a world where disobedience is the only moral option. It’s a far cry from the 1940 Disney version — let alone Disney’s 2022 live-action remake.

In an interview with Inverse, McHale discusses collaborating with del Toro on the script for Pinocchio, making Geppetto more well-rounded, and giving Guillermo notes on his songs for the film.

How was your collaboration with del Toro? Were you familiar with his take on the project beforehand?

So I am aware that there was a script written before I came on, but Guillermo made the decision to not let me see it, so I have no idea what it looked like or what was in it. He said, “I just want to start fresh, and I want your take.”

What were you excited to add to the story in this particular adaptation?

I was excited about figuring out how to make it a story of Geppetto losing his son and trying to replace him with Pinocchio. A story where Pinocchio is really being forced to fit into a box that he doesn't fit in. I think all parents, or maybe most parents, have a vision for what their child is going to be like, and they're always different than your expectations. It was fun to explore that.

Going back to the original book, Pinocchio is so wild. There are these huge ups and downs of emotion where he’s just so excited about some crazy thing he wants to do, and he’s not gonna listen to his father or whoever tells him what to do. But then bad things happen he regrets it so hard. That’s a very honest view of how kids interact with the world because they're in their own little heads. I had never seen that done in Pinocchio adaptations. So bringing that kind of big up and down of emotion for the main character was exciting.

Something surprising in the film was how important fascism was to the story. Why did you take Pinocchio in that direction?

The key to the story is Pinocchio and his relationship with his father, and we explore different types of fathers. Geppetto is not perfect by any means, but there are others like Volpe or Podesta who are way worse.

Fascism is something that Guillermo brought up that has interested him a lot in his work. It was scary to me because I didn’t want to make propaganda ourselves by having false things happening. I wanted to tell actual historical truths. So a lot of research went into reading countless books and accounts of actual people living during that time because I wanted to make it about the characters’ experiences with that time period rather than making a big statement about Italy or fascism. It’s about people having to deal with those oppressive situations.

The film outright includes Mussolini as a character, how was it like writing for him?

Including Mussolini as a character was another thing where I went, “I don’t know about that,” but Guillermo really wanted to do it. He’s very confident in just going for things. So I kind of just followed his whims.

The key to the character was that we didn't want to make fascism cool, even though the style was cool at the time. It was futuristic and modern, and you have to be honest about that. The youth camp has cool architecture, but you also have to show the inner fragility of people that are trying to take control because they feel like they don’t have it inside.

Something that surprised me was the addition of songs that don’t feel like your standard musical numbers. How was that experience?

The original lyricist didn’t work out, so Guillermo said he’d just write the lyrics, and we’d see how it goes. He wrote the lyrics into the script and sent it to me. I revised the lyrics — I even made recordings of myself singing certain portions to explain what I intended — and I sent it back to him. Then he said, “Oh, when I said I was gonna write the lyrics, I did not mean that we were gonna write the lyrics.” I was devastated. I had criticized everything he was doing. It was really embarrassing, and I thought my world was ending.

But then, in the second paragraph, he said, “But I really appreciate these changes. Let’s work on it together.” And I had just seen my life flash before my eyes.

We tried our best ideas, but the lyricist and composer really have to work together, and what we did wasn’t going to do that. So Alexandre Desplat took over with his friend. They took our rough ideas and made them into songs. The one song that stuck around with the lyrics pretty close to what I wrote was the song the black rabbits sing.

“I had just seen my life flash before my eyes.”

The songs also feel almost diegetic, was that intentional?

Yes, I think the hope was that it would feel like a natural part of the character’s existence. Pinocchio, as a character, is a performer, so it makes sense he’d sing. Same with Volpe.

How did working on Over the Garden Wall help you in writing this movie?

A lot of the themes and symbolism in that show were figured out while doing the music and inserting it back into the story. I learned how much music can really broaden the artistic expression of a project. Knowing that was going to happen with Alexandre because of how amazing he is and that he was going to be able to find these little things that he could bring back, we were trying to leave some breadcrumbs for him to explore and use.

Did you find any commonality between the two projects? Thematically or textually.

In a lot of ways, Pinocchio has a lot of the exuberance of Greg in Over the Garden Wall — a certain joyfulness and innocence about life. And I guess the crying aspect of it. Both seem to make people cry, which hopefully is a good thing.

I’m curious, have you seen the Disney version of Pinocchio? Either the animated or live-action version.

I had seen the Disney version a long time ago, but I chose not to watch it again before writing the script. After it was done and handed in and people were storyboarding it, I did go back and rewatch that original Disney one. I was kind of surprised at the similarities and differences. We ended up keeping a certain bit the same as they did, but then other things and characters and relationships were completely different. It was interesting to see that. It is an unbelievably beautiful film.