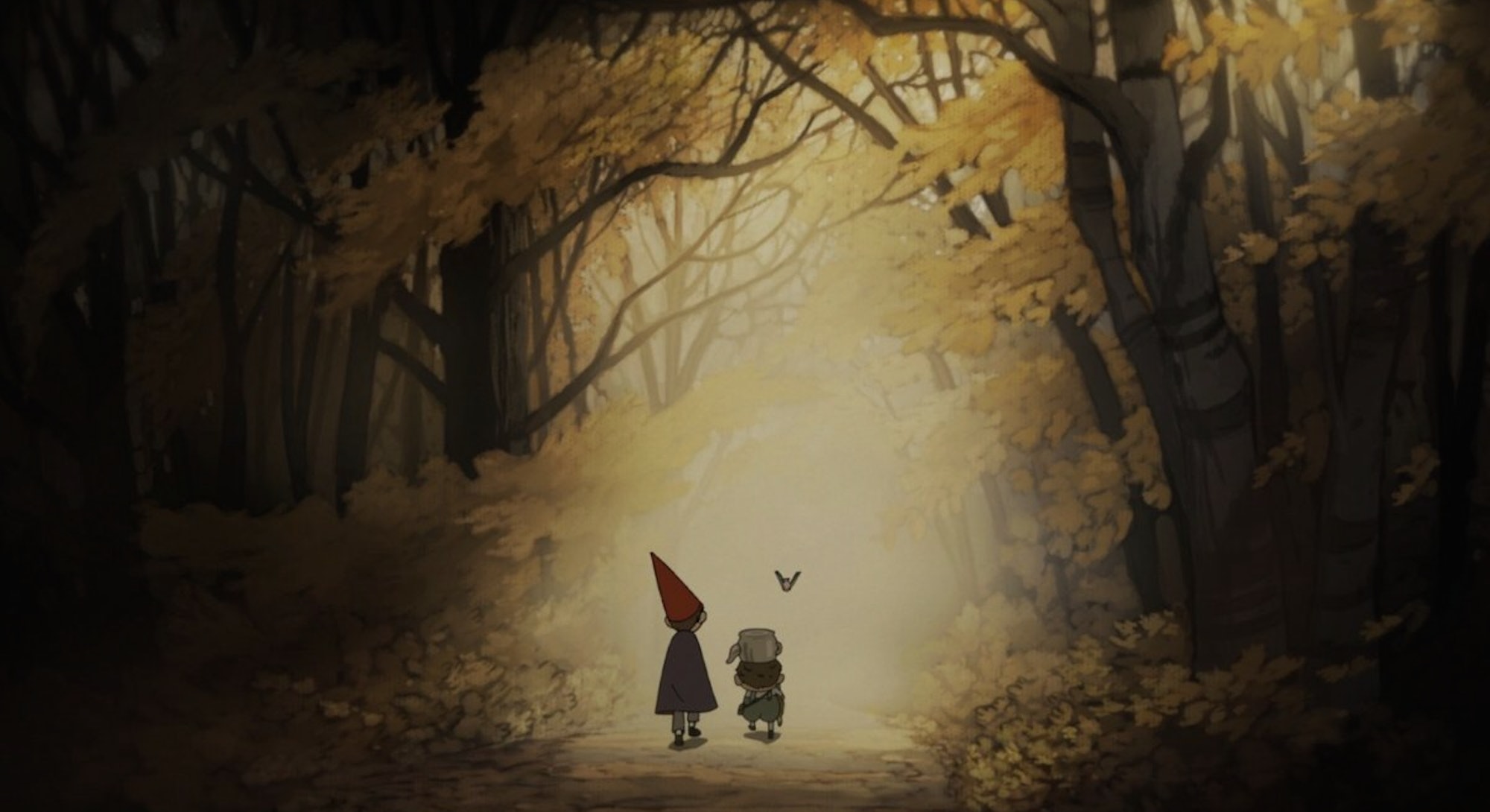 The best spooky story of the last decade wasn’t released until three days after Halloween.

Originally airing in 10 chapters from November 3 to 7, 2014, Over the Garden Wall was Cartoon Network’s first original miniseries. The story from Adventure Time creative director Patrick McHale follows two brothers, Wirt (Elijah Wood) and Greg (Collin Dean), who are lost in a mysterious woods called “The Unknown.” Joined by a talking bird named Beatrice, Wirt and Greg struggle to find their way home while encountering witches, monsters, and a demon called The Beast.

While presumably meant for children, Over the Garden Wall became a cult classic thanks to its folksy soundtrack, retro animation, and some genuine frights. Six years later, Over the Garden Wall is an annual Halloween rewatch for many (myself included), while any Comic Con event across the country likely includes at least one cosplayer inspired by the series.

In a long and winding conversation with Inverse, McHale reveals how Over the Garden Wall was inspired by the final season of Breaking Bad, what he would have done with an 18-episode season, his idea for a “spiritual successor,” the spinoff idea that Cartoon Network rejected, and the surprising backstory to one fan-favorite character.

This interview has been edited lightly for brevity and clarity.

What stories or pieces or art inspired Over the Garden Wall?

One of the initial inspirations for the show’s visual style was a rather obscure book called The Complete Optimist. The show Breaking Bad also ended up being a surprisingly big influence. And Rocky Horror Picture Show.

How did Breaking Bad inspire Over the Garden Wall?

I think the final season of Breaking Bad was airing around the time that we were halfway through our writing process, and I was catching up on the show to get my mind off the daily stresses of production. As I watched the show, I started to realize that they weren’t really trying to set up huge plot points so that they could later pay them off — it felt more organic. It felt like they were writing whatever felt right for that moment of the show, and for the characters. Whatever was exciting or interesting or satisfying. I realized you can write whatever you want. So I stopped stressing so hard about trying to structure everything “the right way” and I finally let the instincts kick in. It’s much better to let the story and characters live and breathe.

It was around this time that I realized we could move our first episode — which (spoiler alert) originally involved Wirt and Greg in their hometown on Halloween night — to the 9th episode spot. That small change made the show so much stronger, in my opinion. Once I realized that we could write whatever we wanted, that we didn’t have to stay chained to a specific set of tracks, the story began to bloom.

How did you get Elijah Wood to work with you?

When we did our first casting call for Wirt, we mostly just got Woody Allen impressions. I told my casting director (Linda Lamontagne) that I’d imagined him having more of an Elijah Wood type voice, and she said, “Well then let’s just ask Elijah!” So we did, and he said OK! Kind of amazing.

“When we did our first casting call for Wirt, we mostly just got Woody Allen impressions.”

What did you learn from Adventure Time that helped you make Over the Garden Wall?

It’s hard to even start listing all the things I learned on Adventure Time. I guess the most important thing I got from AT was confidence. I’d learned all the important ins-and-outs of running a show, so although Over the Garden Wall was quite a difficult show to make, the production was actually pretty smooth sailing.

You’ve worked with Adventure Time creator Pendleton Ward for a long time, did he contribute to Over the Garden Wall?

I was having trouble finding full-time storyboard artists for the show because it was such a short-term job, so Pen was one of the pals who saved us by coming in and storyboarding/writing at the last minute. He did half of Episode 4. I think he may have done some boards for Episode 5 as well, but I forget. I likely asked his opinion on other things too along the way, but I really don’t remember.

The music in Over the Garden Wall is remarkable. What’s your favorite song from the series?

An unsung favorite of mine is the marching band theme “Halloween Halftime.” It just sneaks into my head sometimes and hangs around. It really does sound like those marching band football bleachers tunes from high school. “Pottsfield CM” is another special one.

The main theme was written by you. How did it come together?

Yes, co-written by me and the Blasting Company. I remember being at the beach with my family, texting with the band, when we figured out the lyrics “if dreams can’t come true then why not pretend…”

You’ve expanded on the story with a series of graphic novels. Do you think you’ll ever create a sequel?

I doubt I’ll ever make another Over the Garden Wall miniseries, but there’s a sort of spiritual successor that I absolutely want to make. I love the miniseries format. It can be very grueling making a TV show, so it’s nice when there’s a light at the end of the tunnel.

Can you tell me anything about this spiritual successor you want to make? Does it take place in the Unknown?

I can’t say much about it right now. It has absolutely nothing to do with Over the Garden Wall, other than that it comes from a similar place in my heart and brain.

What are the advantages and limitations of graphic novels over animation in storytelling?

One of the main limitations in graphic novels for me is that there’s no sound, which is 50 percent of the viewer’s experience in animation. But with graphic novels, you have the written word, which can be very powerful.

Are there any Over the Garden Wall stories you’ve only been able to tell through the graphic novel format?

I wrote a Fred the Horse comic that probably wouldn’t have worked as an animated short, but I thought made a nice comic. I think at some point I actually did pitch Cartoon Network the idea of doing a series of Fred the Horse horror shorts, but nobody was especially inspired to invest the millions of dollars it would take to make that. So, it was nice to have comics as an outlet.

Right. We didn’t outline all those stories, and many of them ended up being folded together or changed, and included in other forms in the series (or the comics)… but one of the major cuts was that I originally planned to have a multi-episode arc involving Wirt and Greg turning into animals, and traveling through various animal-themed situations. One involved a hunter,

one involved a toad and a snail, and another revolved around Greg’s frog’s backstory. We did one comic where Wirt and Greg turned into animals as a sort of homage to that concept, but the actual show would have played it very differently.

What was Greg’s frog’s backstory going to be?

It was a bit like Siddhartha, but with frogs. And it involved his relationship with his absentee father.

“It was a bit like Siddhartha, but with frogs.”

Was there any debate over the ending and whether to reveal where Wirt and Greg were really from?

Originally, the series started with Wirt and Greg in their hometown in the first episode. We tried a million different ways to try to get that to work, but it just never felt right. It was better to leave their pasts mysterious at first. We also tried a ton of different ending concepts.

Were those other endings dramatically different?

Oh sure. Some involved Wirt sacrificing himself and staying in the Unknown so that Greg could get home. Some involved both Wirt and Greg getting onto a train. One involved a little shack with the beast banging on the door, screaming to be let in like the wolf in the Three Little Pigs. I don’t really remember all of them. Those versions are all relegated to the Unknown.

Is Beatrice a good person who did some bad things or a bad person trying to be better?

People who are desperate sometimes do bad things, but I generally don’t think of anyone as a bad person, exactly. We were all little babies at one point… and in most ways, we’re still little babies well into adulthood until we die.

There’s a popular theory that the Unknown is Purgatory. Is it correct? Incorrect?

Are you surprised by the continued popularity of Over the Garden Wall?

I’m extremely happy that people still seem to enjoy the show. The goal was definitely to make a holiday special that could be rewatched every year — I never had any illusions that it could be a big smash hit, but I did hope that it might become a sort of cult classic. I’m very relieved that it found its niche.

Why do you think people still dress up as Wirt and Greg at Comic Con?

Well, I think a Wirt costume is pretty cheap and easy to put together and wear, but it’s also somewhat distinct. And works pretty well for any gender. So… that’s a pretty solid combination when it comes to Comic Con costumes.

What are some of your favorite animations that have been released since 2014?

Tux and Fanny is incredibly inspiring. I’m embarrassed to say that I don’t watch a lot of animation these days, mostly because it either makes me feel bad about my own work or I start judging and criticizing other people’s work.

Over the Garden Wall is available to watch on HBO Max.