“I wasn’t an insect guy” 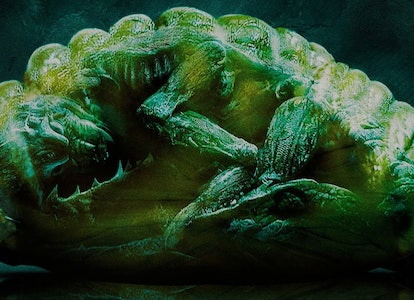 Update: After we published this article, Guillermo del Toro reached out to Inverse via production designer TyRuben Ellingson to refute our headline calling the movie a flop. (Mimic made just $25 million in theaters but went on to earn twice its $30M in home video sales).

The guy should know that Mimic was MASSIVE on home video. It made twice the money back. That is why there are two sequels. So not a flop... but alas... nice stuff.

“I remember when we met he just came up to me and gave me a big embrace and he said, ‘Ty, let’s talk!’” Ellingson tells Inverse. “Right off the bat, my relationship with him was very intimate in the sense that he wanted to talk about projects and wanted my ideas to be flowing freely. I took a leave of absence from ILM to go work with del Toro. Then [Mimic] became a feature and I ended up working on it for well over a year.”

Del Toro, who was in his late 20s at the time, had come to Ellingson’s workplace at Industrial Light & Magic to screen Cronos, the 1993 independent horror film that put him on Hollywood’s radar. Thanks to the hard work of Ellingson and del Toro, Mimic went on to become a sci-fi horror cult classic, with a gruesome monster design that still appears fresh today for its 25th anniversary.

Mimic was originally envisioned as part of a proposed sci-fi horror anthology called Light Years, designed to showcase promising young directors. However, once Miramax’s Bob and Harvey Weinstein saw the incredible monster designs conjured by Ellingson (who had previously worked on Jurassic Park and Star Wars: A New Hope's re-release), the studio brass greenlit a feature-length project peeled from the project.

In a plotline that seems particularly resonant in today’s world, Mimic revolves around a mysterious virus known as Strickler’s Disease that’s attacking Manhattan’s children, causing tragic respiratory and muscular failure. It’s discovered that the carrier is the common cockroach. To combat the creepy culprits, an entomologist played by Mira Sorvino engineers a predatory insect called the Judas Breed to infiltrate and destroy the disease-carrying bugs.

“There’s 50 percent of that film in the final cut.”

But mess with Mother Nature and she bites back. Years later, those bio-engineered assassin insects mutate in the sewers and subway into huge, humanoid hybrids that seek larger prey. The seven-foot-tall, shape-shifting bugs must be eradicated before their kind spreads further.

The Weinsteins may have approved the project, but that doesn’t mean the studio didn’t have its concerns. Wary that the relatively inexperienced director would fumble an expensive Hollywood feature, Miramax executives hovered around the set like micromanaging vultures, waiting to pounce should del Toro make any money-losing mistakes. The film was eventually released on August 22, 1997 and sadly never found an audience. It was a box office bomb, having pulled in just $25 million off a modest $30 million budget.

“I do feel a little disappointed that Mimic wasn’t that thing del Toro saw in his mind,” says Ellingson. “The one I listened to him talk about was a different film. There’s 50 percent of that film in the final cut, but there’s also 50 percent of something else representing negotiated studio needs.”

Mimic did spawn two forgettable sequels, 2001’s Mimic 2 and 2003’s Mimic 3: Sentinel, but del Toro was not involved in those projects.

Despite being both marketed poorly and misunderstood by execs, Mimic’s production values are top-notch, doubling as a fantastic showcase for del Toro’s blossoming talent before he would go on to helm Blade II in 2002, Hellboy in 2004, and Pan’s Labyrinth in 2006.

Much of the highly-stylized appeal to this murky horror flick came from the Academy Award-nominated Danish cinematographer Dan Laustsen, who would continue to collaborate with del Toro for many years, shooting the Mexican filmmaker’s Crimson Peak, The Shape of Water, and most recently, Nightmare Alley. His exceptional work in the dark catacombs of New York City create an unnerving environment of primal dread amid the mimics' foul habitat.

But the real stars of the movie are the slimy, pincer-waving predators known as the Judas Breed, and all their sticky, sickening incarnations. These creatures were created in long sessions between Ellingson and del Toro, and were brought to life using a clever blend of miniatures, CGI, and practical effects.

Over the course of three to four months, the duo generated a lot of creature sketches. Even at this early stage in del Toro’s career, Ellingson found the filmmaker to be an indefatigable force and a consummate professional.

“He’s a bonafide genius and literally like a historian mixed with a technologist mixed with a fine artist,” Ellingson notes. “He’s very clear about what matters when he makes a movie, using a variety of techniques to deliver a more nuanced, complex approach to the imagery. It always has a quality of inventiveness.”

That being said, del Toro also remained focused on being true and accurate to insect anatomy.

“I wasn’t an insect guy so I went and bought books and found resources to make it have the right number of leg segments and pieces,” says Ellingson. “The wings of a creature that size, in order to lift something that heavy, had to be really big. But they were too big so we had to make the body slender and super lightweight so it looked like the body could be carried by the wings without it being ridiculous.”

“It was just me and del Toro and we had fax machines.”

There were also worries about the design looking too “campy,” and the filmmakers wanted to avoid the voracious creatures coming off as silly.

“In my view, designs succeed or fail because of their silhouette,” says Ellingson. “Those primary shapes are what make you remember the X-wing fighter or the TIE fighter. It’s not all the greeblie details that go into the motors and such, it’s the strength of the shape. It was because of the strength of that initial design phase that when we presented the work to the studio and producers, they became enthusiastic about it and that’s when they started talking to del Toro about making it a feature.”

However, taking a 30-page script and expanding it into a 100-minute movie carried with it some real-life issues on how it might be interpreted once it hit the big screen. “I think del Toro was reluctant because we just had a single idea and he was nervous about it being ‘La Cucaracha,’ the giant cockroach movie,” recalls Ellingson. “And that was a concern to him coming from Mexico. But the next morning we went to breakfast and I remember he hit me on the chest hard with this big skillet of a hand and said, ‘I figured out the movie!’

“It was the opening sequence where you find the nymph mimic, the baby mimic floating in this reservoir. They think it’s a child but they pull it out and it’s this insect. Those images and ideas were the beginning of how that set a different agenda for the film. Now you had this mystery of what this thing is, but you’re not showing the whole creature.”

Looking back 25 years on the occasion of Mimic's milestone anniversary, Ellingson believes it was a crucial point in his development as an artist and recalls his time with del Toro fondly.

“I was the first hire and it was just me and del Toro and we had fax machines. As far as the design process goes, I remember feeling that for the first time I was collaborating with someone who wanted me to go as far as I could. I learned to be relentless in my approach to quality, which he really showed me.”

Mimic and its two sequels can currently be found crawling on HBO Max.

This article was originally published on Aug. 25, 2022