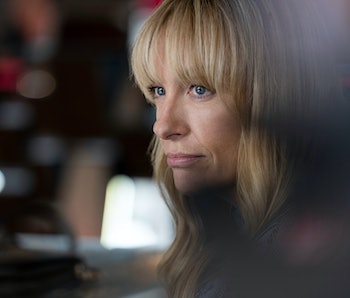 Notions of the past intruding on the present, secret identities, and the hidden horrors in a small town are all explored in Pieces of Her, a new dramatic thriller headed to Netflix this week.

Let’s bare our souls and take a deeper dive into the sordid details of Netflix’s Pieces of Her!

What is the Pieces of Her release date?

Pieces of Her lands on Friday, March 4, 2022, exclusively on Netflix.

When is the Pieces of Her release time?

Netflix releases new movies and TV shows at midnight Pacific, which is 3 a.m. Eastern. Pieces of Her will premiere at this time on the streaming platform.

How many episodes are in Pieces of Her Season 1?

The debut season of Pieces of Her consists of eight one-hour episodes. All episodes will be available to stream on March 4.

What is the Pieces of Her plot?

Pieces of Her is based on Karin Slaughter’s 2018 novel of the same name and centers around a middle-aged woman named Laura Oliver and her daughter, Andy, who reside in the southern seaside hamlet of Belle Isle. But for three decades Laura has been harboring a secret identity, one unbeknownst to her college-dropout daughter.

When a violent shooting altercation occurs during her daughter’s birthday meal at the local diner, Laura’s quiet cover story is blown and suddenly the authorities are asking serious questions she is definitely adamant about answering. Now Andy must become a detective and piece together the shattered remnants of mom’s past to clear her name and offer a hopeful future for them both as shadows from Laura’s former life descend on Belle Isle.

This mystery thriller series was developed by Homeland‘s Charlotte Stoudt and Lesli Linka Glatter, with Stoudt doing double duty as writer and showrunner. All eight episodes of the premiere season are directed by Minkie Spiro (Downton Abbey, Better Call Saul).

It’s produced by Bruna Papandrea’s (Gone Girl) Made Up Stories production shingle, which is attached to both Netflix’s upcoming anthology Anatomy of a Scandal and HBO’s The Undoing, which showcases Nicole Kidman and Hugh Grant.

Who is in the Pieces of Her cast?

In addition to the series’ main star, the Emmy and Golden Globe-winning Toni Collette (Laura Oliver), Pieces of Her also features:

Is there a Pieces of Her trailer?

Yes, Netflix delivered the suspense-fueled trailer for Pieces of Her on February 15, 2022, and you can immerse yourself in its dark secrets below!

Will there be a Pieces of Her Season 2?

Perhaps, but currently, there are no announcements of a second season for Pieces of Her from Netflix.

Pieces of Her arrives starting March 4, 2022 on Netflix.