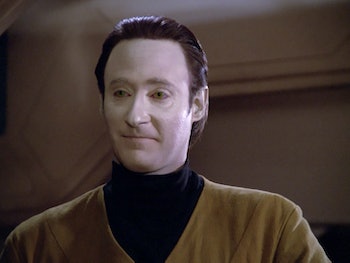 Nobody expects Moriarty! The stakes for Star Trek: Picard Season 3 are at an all-time high, but nobody could have anticipated that this nostalgia-filled Next Generation reunion would also become... a Sherlock Holmes crossover? Here’s how the big New York Comic-Con trailer for Picard Season 3 reveals three new villains, two of which we haven’t thought about in a very long time. And the implications could be fascinating.

At New York Comic Con 2022, the explosive teaser trailer for Star Trek: Picard Season 3 revealed quite a bit. The story of the upcoming season seems centered on a new villain named Vadic (Amanda Plummer) who wants revenge on Picard, for... reasons that are not clear!

We also get a full look at the returning Next Generation cast, including Geordi (LeVar Burton), Riker (Jonathan Frakes), Crusher (Gates McFadden), Troi (Marina Sirtis), and Worf (Michael Dorn) — who notes he now “prefers pacifism to combat.” Considering he was a fierce Klingon warrior throughout The Next Generation and Deep Space Nine, this change was certainly unexpected.

The trailer gives us glimpses of Seven (Jeri Ryan) and Raffi (Michelle Hurd), who seem to have switched places in regard to their interest in Starfleet. Seven is now in uniform and a commander in Starfleet, while Raffi appears to be out of uniform, which could indicate she’s quit Starfleet (again!)

We’re also introduced to two new members of the La Forge family: Mica Burton as Alandra La Forge and Sharpe Chestnut as Sidney La Forge, the youngest, and eldest daughter of Geordi La Forge, respectively. Both are in Starfleet, and at one point in the trailer, Picard gives “La Forge” the order to “gun it” because it turns out Sidney La Forge is the helmsman of the USS Titan. In Season 1 of The Next Generation, Geordi La Forge was the helmsman of the USS Enterprise before becoming the chief engineer in Season 2. (Mica Burton is also the real-life daughter of LeVar Burton.)

But the big news of the trailer is definitely the rogues' gallery...

As revealed at New York Comic Con, the primary antagonist of Picard Season 3 is a new character named Vadic played by veteran actress Amanda Plummer. Vadic talks a lot about burning down the Federation and getting vengeance on Jean-Luc. The inciting incident of the season seems to be Vadic (or her forces) attacking Beverly Crusher, who according to Gates McFadden is working for a 24th-century version of “Doctors Without Borders,” and that Crusher is “being hunted.”

The source of Vadic’s anger will clearly be a major reveal in Season 3, but for now, her ships in the trailer give-off major Star Trek 2009 reboot vibes, reminiscent of Nero’s (Eric Bana) Romulan forces in that film. Of note, Vadic also appears to rock one gloved hand and one not-so-gloved hand, which has got to be a shout-out to Khaaaaaan!!

But Vadic and her motivations are really just the beginning of the game. Because the game in Picard Season 3 is very much afoot!

In December 1893, in the Arthur Conan Doyle-penned short story “The Adventure of the Final Problem,” Sherlock Holmes faced his greatest nemesis of all time, the evil Professor James Moriarty. Back in the day, Doyle created Moriarty as a retroactive end-all-be-all villain because he wanted to kill off Sherlock Holmes. (Pretty much every adaptation of Moriarty is slightly better and more fleshed-out than the Doyle original.)

But what does Moriarty have to do with Star Trek? Well, in the TNG Season 2 episode, “Elementary, Dear Data,” a sentient holographic AI version of Moriarty was created by Geordi and Data after they were getting bored of Data solving Sherlock Holmes roleplay scenarios too quickly. Played by Daniel Davis, this Moriarty became self-aware of his 24th-century setting and tried to take over the Enterprise. In the TNG Season 6 episode “Ship in a Bottle,” Moriarty returned, tried to take over the Enterprise again, and then was stuck in perpetual simulation by Picard. At the time of “Elementary Dear Data,” TNG had to pay royalties to use these characters. But in 2022, Moriarty is very much in the public domain.

But how is Moriarty back in Picard? Somewhat tellingly, the first shot of Moriarty in the trailer seems to show him on the deck of the La Sirena. In the two previous seasons of Picard, one feature of La Sirena is its numerous holographic crewmembers. Presuming that Moriarty is back as a literal AI hologram again, perhaps he comes back through La Sirena?

For longtime TNG fans, the biggest shock was that Brent Spiner is returning to Trek canon not as a resurrected Data, nor as the android prototype B-4, but instead, as the android Lore, Data’s evil twin brother from The Next Generation.

However, this new incarnation of Lore looks decidedly more human than Data or Lore looked before. Spiner seems to be keeping his natural skin tone, and also lacks those classic yellow android eyes. Still, in the final shot of the trailer, Geordi clearly identifies that this is Lore.

The last time we saw Lore was in the TNG Season 7 episode, “Descent Part II.” In that story, Lore had briefly brain-washed Data and led a group of liberated Borg to attack all sorts of planets. It ended with Data becoming good again, and then, turning Lore off. Presumably, Lore’s body was taken from the Enterprise and stored on Earth, likely at the Daystrom Institute where Dr. Jurati (Alison Pill) worked as a roboticist in Picard Season 1. Then again, the press release says that this character is named Lore, which could indicate there's some other twist. B-4 with Lore’s memories? A composite of Lore and Data’s memories that resulted in a new uber-Lore?

Lending credence to the idea that this return is not straightforward, comes from Brent Spiner himself. Speaking at the Star Trek Universe panel at New York Comic-Con, Spiner said that Lore is back in “a very complicated way.”

Either way, Picard Season 3 seems intent on not only giving the Next Generation crew a proper send-off but also, filling this finale with the deepest Trekkie cuts ever.