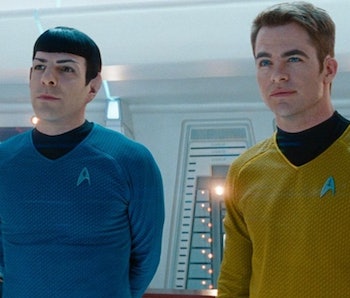 Ever since the Star Trek timeline was split in 2009, fans have wondered if we’ll see additional crossovers between the reboot “Kelvin Universe” and the Prime Universe of the rest of the canon. While some comics have explored the relationship between the two universes, it wasn’t until Discovery Season 3 in 2020 that we learned people in the Prime Universe even knew about the Kelvin Universe.

Now there’s reason to believe the Kelvin Universe may be seeping into the Prime Universe. Spoilers ahead for Lower Decks Season 3, Episode 5.

Although Lower Decks recently paid tribute to Deep Space Nine, the entirety of Season 3 has been brimming with references to the Kelvin Universe. Episode 2 had two overt Easter eggs; a reference to Christopher Pine-Kirk’s quick ascension to the captaincy, and a visual nod to the skydiving scene from Star Trek 2009. Then in Episode 5, “Reflections,” we got a very telling quip from Tendi. When Rutherford tells her about a strange dream he’s had, she wonders if he’s dreamt of “a new timeline with Kirk and Spock where they have cinematic chemistry.”

Lower Decks showrunner Mike McMahan tells Inverse that the answer is a definite maybe, saying, “There are many parallel universes and mirrorverses in Star Trek, it makes you wonder if dreams are a way to access information from them.”

The idea that a dreamscape can be a literal connection to another plane of existence has several precedents in Trek canon. In the Next Generation episode “Night Terrors,” an alien attempts to communicate with Troi through nightmares. And in the Voyager episode “Waking Moments,” the crew tangos with an alien race who live primarily in dreams, and consider those in the waking world inferior.

Clearly, Tendi’s dream comment was a joke, as was Mike McMahan’s playful response to our question about Kelvin Universe dreams. But because Lower Decks isn’t a spoof — it’s a humorous show set within the Trek Prime timeline — it makes you wonder if there’s a literal dream-tether between the Prime and Kelvin timelines.

After all, in “Reflections,” we take Rutherford’s dreams quite seriously, mostly because a good chunk of the episode happens within a dreamscape, where we see two sides of his personality fighting for dominance. McMahan notes that “self-discovery” is “certainly a huge theme of Lower Decks... they get to mark their own paths and identities.” In “Reflections,” that plays out with Rutherford figuring out how to reconcile his old self with his current identity.

Tendi’s dream about Kirk and Spock in a “new timeline” is just as real as Rutherford’s dream, even if we didn’t get to see it. Interestingly, the first Kelvin timeline movie, Star Trek 2009, also gave us our first Orion in Starfleet, Uhura’s roommate Galia (Rachel Nichols), who, like Tendi, was a counterpoint to previous Star Trek stereotypes about Orions.