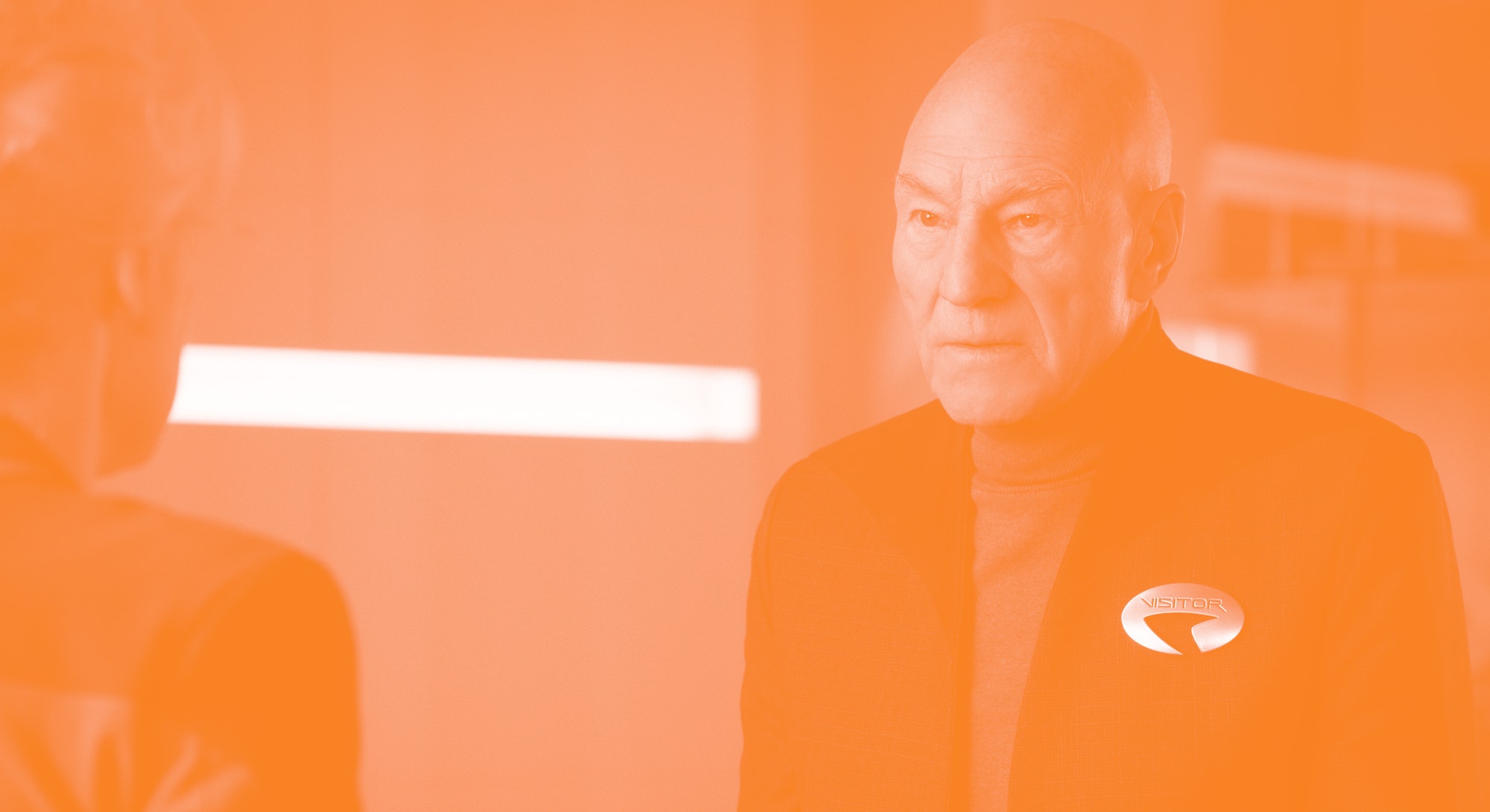 Has Jean-Luc said "make it so" or "engage" yet on Star Trek: Picard? The CBS All Access series may not have the most obvious Trekkie Easter eggs, but that doesn't mean there's not still a lot of hardcore canon to unpack. In the second episode of the series, "Maps and Legends," Picard references everything from Discovery to Deep Space Nine, along with a very, very familiar set of rocks from the original series.

Here's every single blink-and-you'll-miss-it Easter egg and reference from episode 2, "Maps and Legends," including some telling lines that deepen the show's connection to the history of the final frontier, and may hint at its own distant future.

The title of this episode likely references a Michael Chabon non-fiction book of the same name. In 2001, Chabon published Maps and Legends, an essay collection celebrating his favorite works of fiction. Chabon is a co-creator and showrunner of Picard.

During the 2385 flashback scene on Mars, we hear a "Happy First Contact Day" announcement. This references the moment when Vulcans met Humans for the first time on April 5, 2063, as seen in the 1996 movie First Contact. The Mars Synth revolt itself was first depicted in the Short Treks episode "Children of Mars."

F-8 is a Soong-type android

The android F-8 and all the other Synths in this scene are very clearly the same models as Data, created by Dr. Noonian Soong, sharing his pearlescent skin and yellow eyes. The idea that everyone was trying to get F-8 to understand a bad joke references multiple Next Generation episodes. From "Encounter at Farpoint," to Generations, Data was always failing to "get" jokes.

Una amino matrices in the replicators

One of the doomed workers at Utopia Planitia briefly complains about the food replicators, wishing they would use the "Una amino matrices" again. This references a line from the Short Treks episode "Q&A," in which Spock asked about which food matrix was being used on the Enterprise. The character known as "Number One" (Rebecca Romijn) says they're running the "Una amino" versions, to which Spock replies, "Your name is Una."

Romulan history, booze and the Gorn!

Picard's companions, Laris and Zhaban, are former members of the Tal Shair, a Romulan spy organization first revealed in the TNG episode "Face of the Enemy." Laris also mentions Romulan Ale, perhaps the most famous booze in all of Trek. Bones gave Kirk some Romulan Ale in The Wrath of Khan and Trek canon couldn't stop talking about it from there.

Laris also mentions the "Gorn Hegemony," which is the government of the lizard-people known as the Gorn. They first appeared in the TOS episode "Arena," and later in the Enterprise episode "In a Mirror Darkly." We'll get another Gorn Easter egg before this episode is over, too.

Former Borg severed from the Collective

Dahj's twin Soji refers to the Borg Cube as "the artifact," and both she and Narek mention that this Cube has been severed from the collective. We've never seen an entire cube cut off from the hive in this way, mostly just individual Borg Drones like Jean-Luc, Seven of Nine, and Hugh.

Picard's doctor is the only other Stargazer crewmember we've seen

During the episode, we learn Picard's private doctor served with him on the Stargazer. This was his ship before he commanded the Enterprise, and though he spent a super-long time there, we've never actually met another member of the crew. In the TNG episode "The Battle" we saw a few ghost crewmembers in flashbacks. Wesley Crusher's dad, Jack, served on the Stargazer, but he died off-screen.

Picard's doctor mentions he has a defect in the parietal lobe of his brain. Jean-Luc says that he was "told a long time ago... that it might cause a problem." This references the TNG finale, "All Good Things..." in which an alternate future version of Picard (with a big bushy beard) had a neurological disorder called Irumodic syndrome. It's not clear if that's what Picard has now, but back in "All Good Things..." Crusher told him the defect could lead to various neurological disorders, none of which sound particularly fun.

Though briefly seen in "Remembrance," this episode gives us a better look at the "new" Starfleet uniforms of 2399. Notably, the new Insignia combadge matches up with the exact same design as the "future" glimpsed in "All Good Things..." DS9's "The Visitor," and Voyager's "Endgame." The uniforms look like a slicker version of the DS9/Voyager-era uniform, but those combadges are identical.

Holograms of Enterprises past

As Jean-Luc walks into Starfleet Headquarters, he looks wistfully at a hologram of the classic USS Enterprise NCC-1701. This version is actually the redesigned Discovery-era USS Enterprise, in a tiny bit of retcon. The hologram then, of course, morphs into the version most familiar to Picard, the NCC-1701-D.

When Picard's former boss tells him off, she says "pure fucking hubris." Earlier in the episode, Laris said "cheeky fuckers" in reference to the agents who messed with Dahj's apartment. These two F-bombs are the second and third uses of the word "fuck" in Star Trek history. The first was in 2017, in the Discovery episode "Choose Your Pain," when Ensign Tilly said, "You guys, this is so fucking cool."

Is the Federation shrinking?

As Jean-Luc is told-off, we learn that in 2385, "Fourteen species within the Federation" were thinking of pulling out of the United Federation of Planets. This may be a future Easter egg for Discovery Season 3. In the trailers, the flag of the United Federation of Planets has far fewer stars on it than in Picard's time. Discovery season will be set 787 years ahead of where we find Jean-Luc now, in the year 3186.

An escalator ride at Starfleet Command

Jean-Luc's escalator ride of shame is silly, right? Well... Captain Kirk totally rode an escalator exactly like this in Star Trek: The Motion Picture, with a Vulcan named Commander Sonak. During the scene, Kirk said he was going to a meeting with Admiral Nogura, and he was going to get the Enterprise back. He asked to be demoted to Captain, and it worked! But with Jean-Luc, in a very similar situation, it doesn't work.

Andorians and Trill reference on the Borg Cube

In the background of the Romulan research facility on the Borg Cube, we see a few blue-skinned, antennaed Andorians. Funnily enough, Data's first "daughter" Lal briefly considered being an Andorian before choosing a human appearance in the TNG episode "The Offspring."

"I won't go through all that again"

When Zhaban suggests that Picard call up "Riker, La Forge, Worf" Jean-Luc emphatically refuses. "I won't go through all that again!" This clearly references "All Good Things..." where he did round up the gang to help him with a secret mission. Clearly, he's worried that if he did so again, it could go badly.

Dr. Jurati picks up a hardback copy of a book called The Complete Robot. This is an omnibus that collects a ton of Isaac Asimov's robot novels and stories into one volume. Picard quips he doesn't "get" science fiction, probably because he lives in a funhouse mirror version of Asimov's writings. In fact, as established in "Datalore," the concept of Data's positronic brain — and various ethical programming — comes from Asimov's writings. In real life, Asimov was a good friend of Star Trek creator Gene Roddenberry.

There's a lot of talk about Dahj having gone to school at "Regulus." This can only refer to the planetoid and space station, Regula I from Star Trek II: The Wrath of Khan. That's where Carol and David Marcus developed the Genesis Device in the 2280s, so it seems over a hundred years later, there's some kind of school there.

We don't get to hang out with Raffi Musiker (Michelle Hurd) much in this episode, but her space trailer is situated in a super-iconic location — the Vasquez Rocks in the Sierra Pelona Mountains in Southern California.

The Vasquez rocks are probably most famous for the classic Trek episode, "Arena," where Kirk fought the lizard-like Gorn. TOS used this site as several other alien planets throughout its run, and TNG hit up the same location for the planet Mintaka III in the episode "Who Watches the Watchers." From Voyager, and even the J.J. Abrams 2009 reboot, nearly every iteration of Trek has had at least one alien world set here. Picard may be the very first time in Trek canon that the Vasquez rocks are just plain old earth rocks.