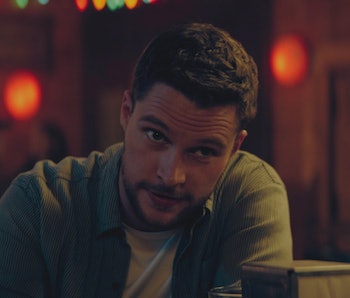 In the two-episode debut of The Peripheral, Flynne Fisher (Chloë Grace Moretz) gets to inhabit not one but two artificial bodies. But, the first body Flynne “drives” is a synthetic copy made for her brother, Burton (Jack Reynor). In the first episode, are we seeing Burton as Flynne or Flynne as Burton?

Inverse checked-in with Jack Reynor ahead of the debut to sort it all out.

Spoilers ahead for The Peripheral, episodes 1 and 2.

In the first episode of the show, Burton is asked to test out a new VR headset for a mysterious company. But because his sister Flynne is the better gamer, he has her fill in for him under his handle “Easy Ice.” For most of the first episode, we think that Flynne inhabits a realistic VR world, something like The Matrix, but even more sophisticated.

Yet by the end of the first episode, after seeing a skeletal mechanical hand under her avatar’s “real” hand, she starts to suspect that it wasn’t a simulation — but something else.

This suspicion is confirmed in Episode 2, “Empathy Bonus,” when Wilf Netherton (Gary Carr) brings Flynne into a different body, this one not modeled on her brother, but instead, modeled on her. As Netherton explains, Flynne is “telepresent, piloting that body as if it were your own.” Flynne and Wilf are separated by about eight decades, but the data from her time is shunted into the future to the peripheral body.

In other words, a “peripheral” is a robot body that is also a time portal.

How The Peripheral cast pulled off a daring body switch

In Episode 1, although Flynne uses the headset to enter into what she believes is a sim, she’s in a peripheral that is her brother’s body. This means Jack Reynor is playing both Burton and Flynne in this episode. Kind of.

“I guess on the surface, it would seem like it’s me playing her,” Reynor tells Inverse. “But, I actually called Chloë and said, ‘why don’t you direct me through this?’ I wanted it to have a feeling of authenticity. So, I guess it’s her playing it through me rather than me playing her.”

In essence, Reynor and Moretz wanted to avoid doing a cyberpunk version of Freaky Friday. There’s not any comedy involved in Flynne’s time in the “Easy Ice” peripheral. For Reynor — a self-described “huge” fan of William Gibson and science fiction — the goal was to do something more naturalistic.

“It was less about trying to copy exactly Chloë’s mannerisms or how she would say something,” Reynor explains. “It was more about trying to inform that sequence with Flynne’s inherent exploratory nature. I didn’t want to play into the militaristic masculinity that Burton exhibits and projects. It was just about having a lightness and being absorbed in the world rather than being an objective operator.”

The Peripheral’s twists could be bigger than Westworld

Because The Peripheral is produced by Westworld’s Lisa Joy and Jonathan Nolan, fans of a certain kind of sci-fi can expect even more twists are coming. At the end of Episode 2, the medicine sent by Wilf from the future miraculously restores the vision of Flynne and Burton’s ailing mother. The future is calling, but we’re also told that some of the branches of the past become dead-ends, referred to as “stubs.” The future exists objectively, but whether or not it’s Flynne and Burton’s future remains to be seen.

“The speculative fiction element of this show feels like it's right around the corner,” Reynor explains. “And I think because of that, this is going to connect to a big audience. And the twists are only going to get bigger.”