“I put my tongue right in there.” 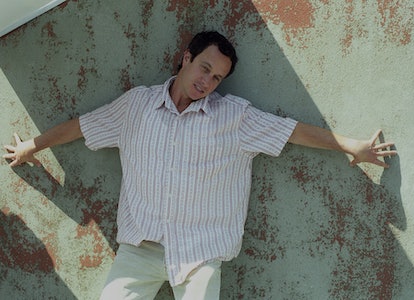 "Every movie that I've done with a girl that I'm supposed to make out with, I actually make out," Pauly Shore tells Inverse. "I put my tongue right in there. I don't care."

The media landscape has changed exponentially since Shore exploded on the scene as MTV's go-to misogynist slacker VJ in the early '90s, ushering in a whole new era of bro culture. By 1992, he was a household name, leading his own block of programming on TV while breaking into movies as the star of the hit comedy Encino Man, Bio-Dome, and more. But riding that character schtick can only go so far. Decades later, it's clear that some of Shore's questionable antics have been deemed unwelcome in the era of #MeToo.

Case in point: ruring the press day for his latest film Guest House, Shore was joined by his castmates Mike Castle and Aimee Teegarden, and he broached the sometimes uncomfortable topic of doing kissing scenes. Obviously, much has changed since he was "Wheezin' the Juice" as Hollywood's odd golden boy.

"I was just going to go back to when I did the movie Jury Duty many years ago," Shore says. "I had a make-out scene with Tia Carrere from Wayne's World, and she's like a buddy of mine. [...] Every movie that I've done with a girl that I'm supposed to make out with, I actually make out. I put my tongue right in there. I don't care. [...] I did that with her, and she hit me. She was like, 'What are you doing!?' And I'm like, 'Whoa babe, I'm sorry. I thought you were going to do it too!' Because sometimes you don't know if you don't talk about it."

Lines can easily blur on-set between what's scripted, what the actor's own interpretation of the words are, and the intention they end up bringing with their performance. "It's just acting, it's not real," he adds.

But for many who go through this, it is most definitely real. With accountability and safety at the front of Hollywood's mind as the industry continues to reconcile with its own toxic past to make on-set work a more pleasant experience, a new role has been created to not just choreograph those uncomfortable sex scenes, but to make sure communication and consent are at the top of the list when piecing these things together. They're called intimacy coordinators.

"I think there are a lot of great things that are happening in the industry as far as, on set, now having intimacy coordinators to really make sure both parties, whoever's involved really, understands what they're going after," Teegarden says. "I think it's about keeping that safety for everybody involved in the process."

It may sound like a small thing, but this is a necessary tool in addressing the bigger issues of misconduct that have plagued the industry for decades. Took them long enough.