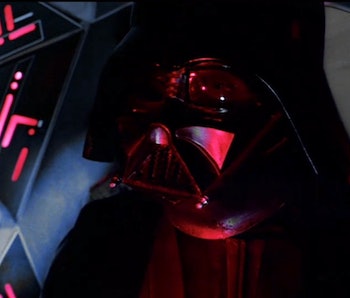 In Revenge of the Sith, the Emperor said that the newly-minted Darth Vader had one job — hunt down and destroy the Jedi. Vader was specifically told this included “your friend Obi-Wan Kenobi.” And yet, after getting the Sith kicked out of him by Kenobi on Mustafar, Darth Vader seemingly did not go hunting for his former master again. In various comic books, novels, and even the Star Wars cartoon series Rebels, we’ve seen Vader tracking down some stray Jedi who escaped Order 66, but the canon is fuzzy on why Vader didn’t go after Maser Kenobi post-Mustafar.

But now, with the full cast of the Disney+ series Obi-Wan Kenobi announced, it seems possible, however unlikely, that Darth Vader could find himself back on the sands of Tatooine. Here’s why one new detail could change our idea of Darth Vader’s story, and shed light on Kenobi’s relationship with the Lars family at the same time.

The new series Obi-Wan Kenobi will feature the return of Joel Edgerton and Bonnie Piesse as Owen Lars and Beru Lars, respectively. Chronologically, Obi-Wan Kenobi’s placement in the Star Wars timeline is known, but according to StarWars.com, “The story begins 10 years after the dramatic events of Star Wars: Revenge of the Sith.”

This timeline is a little different than what was released back in 2019 when The Star Wars Show confirmed that “the untitled series is set eight years after Revenge of the Sith.” Either way, in Star Wars canon, Obi-Wan Kenobi is, in theory, living on Tatooine watching over the Lars moisture farm for roughly 19 years.

Sith ends in 19 BBY, and A New Hope is 0 BBY/ABY. So of the roughly twenty years that Kenobi spends on Tatooine, we’ll see year 10 forward. Notice StarWars.com doesn’t say the new series is set 10 years after Sith. They’ve said “the story begins” in that year.

So, who cares? Well, if Obi-Wan Kenobi covers several years of time, then it stands to reason we could see various intersections between Old Ben and the Lars family. This naturally leads everyone to think about young Luke Skywalker appearing (which feels like a lock), but the more interesting thing is that it allows for some on-screen canon depicting the fallout between the Lars family and Obi-Wan. In Revenge of the Sith, Obi-Wan silently nods to Owen and Beru. In A New Hope, 19 years later, Owen Lars hates his guts and wants Luke to stay the hell away from “that wizard.” But why?

The secret link between Obi-Wan Kenobi and Owen Lars

In canon, there’s actually fairly limited information about Obi-Wan’s relationship with the Lars family. Back before the prequels, George Lucas authorized several publications to reference a backstory that established that Owen was Obi-Wan’s brother and not Anakin’s step-brother.

If you played the Decipher Inc. Star Wars Customizable Card Game in 1996, this factoid was printed right in his brief bio: “Guardian of Luke Skywalker. Brother of Obi-Wan Kenobi.” Obviously, Obi-Wan is pretty loose with his definition of “brothers” (“YOU WERE MY BROTHER ANAKIN!”), but we’ve known for a while this wasn’t really canon anyway. What remains of this bit of lore is obvious: Obi-Wan had some kind of close-ish relationship with the Lars family, and Owen knew exactly what this power baby was capable of.

In the comics, a pivotal falling-out between Owen and Obi-Wan was explored twice. The first was in the non-canon comics story “Old Wounds” in which Darth Maul reappears on Tatooine, only to be bested by Obi-Wan and Owen working together. This story was never canon, though aspects of it were incorporated into an in-canon Marvel comics flashback, framed as Luke reading Obi-Wan’s diaries. In issue #15 of the 2015-2016 run of Marvel’s Star Wars, Luke reads Obi-Wan’s diaries and finds a story about Obi-Wan helping a 10-year-old Luke with some Skyhopper parts. Owen Lars tells Obi-Wan to stay away from the family in this story, which, is supposedly canon. Notably, though this story takes place in 10 BBY, the same timeframe as the new Obi-Wan series, meaning there’s every reason to believe that Obi-Wan’s journals were wrong or incomplete and that he crossed paths with the Lars family a bunch more during Luke’s childhood.

Also, aspects of the Rebels episode “Twin Suns” borrowed from “Old Wounds,” in which Obi-Wan did kill Maul (nee’ Darth) near the Lars Family homestead. But, now that Obi-Wan, Owen, and Beru are all starring in a TV show with Anakin, we’ve really got to wonder if a different Darth is rolling up on Tatooine.

So, let’s consider two details about this Star Wars timeframe as it relates to the possible storylines of Obi-Wan Kenobi.

If you combine these two things together (unfair, but hey, all these characters are in the new show!) then you are led to one conclusion: Maybe Darth Vader did track Obi-Wan Kenobi to Tatooine, and maybe that led to Vader almost finding out about little-kid Luke Skywalker. Because if something that stressful happened while Obi-Wan was “watching over” Luke, you can instantly see why Owen and Beru would become way more overprotective of their adopted son than ever before.

It’s also important to remember that Owen saw his adopted brother bring home the dead-body of his stepmom. That’s the same adopted brother who murdered a bunch of Tusken Raiders, a fact which probably caused the Lars farm to get hassled by Tuskens for like the next 15 years. The Owen Lars we met in A New Hope was a cranky old uncle, preventing Luke from picking up some power converters with his buddies. But what Obi-Wan Kenobi might reveal is that both Owen and Beru were traumatized by a close encounter with the Dark Lord of the Sith himself.

Obi-Wan Kenobi is in production now and does not have a release date.