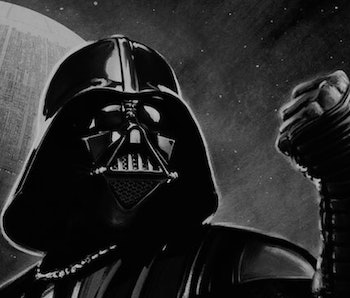 Will the real “Chosen One” please stand up?

The job of balancing the Force in Star Wars is thankless and never-ending.

After Anakin supposedly balanced the Force in Return of the Jedi, his ghost later had to ask Rey to “bring the balance back,” in The Rise of Skywalker. So who is the Chosen One? George Lucas says it’s Anakin. The Rise of Skywalker implies its Rey. In Rebels, Obi-Wan seemed to think it was Luke. In at least one in-canon short story, Yoda really hoped it was gonna be Leia.

But a new in-universe biography of the Skywalker family implies that this whole “Chosen One” thing might not have been any one person. If history had gone differently, our notion of “the Chose One” could have easily changed.

Key to all of this “Chosen One” talk is Qui-Gon Jinn.

Warning: Theorizing from the author lies ahead. ⤵️

What if Qui-Gon Jinn lived?

A forthcoming in-universe Star Wars book called Skywalker: Family At War, is coming out on April 6, 2021.

Skywalker A Family At War, by Kristin Baver
Amazon

No group of characters has had more impact on the Star Wars saga than the Skywalker family. In fact, it could be said that without the Skywalker clan and its mystical connection to the Force--both for good and ill--there would be no Star Wars at all.

Over on StarWars.com, a new excerpt from this book shows off the non-fiction approach to the history of Star Wars as though it was really history. Similar to the Star Trek biographies of Captain Picard or Janeway, or the 1984 Dune Encyclopedia, the text of this book pretends to be an in-universe document, complete with a historian looking back on these events with the fresh eye of a historian.

This is an interesting experiment for Star Wars, insofar as what’s being presented isn’t exactly new canon, but instead, a new interpretation of canon. And within the new excerpt, there are a few compelling insights.

The biggest insight concerns a brief what-if about the death of Qui-Gon. Here’s a snippet (emphasis ours):

“Had Qui-Gon survived and Maul been vanquished, Anakin would have been raised under the watchful, calm tutelage of a seasoned teacher. Although the two would likely have had their disagreements, Qui-Gon’s compassion for the former slave might well have brought about a very different outcome. Perhaps Qui-Gon himself would have helped his Padawan return to Tatooine and free the slaves. At the very least, he would have empathized with Anakin’s restlessness with the strict Jedi Code, offering solutions beyond the scope of Obi-Wan Kenobi’s regulation-driven mind. Perhaps Shmi Skywalker would have been saved.”

In a Qui-Gon-centric timeline, Anakin’s mother not getting killed by Tusken Raiders changes everything. And, in some senses, it suggests — ever so subtly — that the idea of “the Chosen One” was partially in Qui-Gon’s mind.

Was Anakin really the Chosen One?

If you ask George Lucas, the answer to this question is “yes!” But, as many of us have delighted in pointing out for years, Lucas also wore a t-shirt once that said “Han Shot First,” even though his various re-cuts of A New Hope resulted in Han not shooting first. Like the slightly undefined narrative voice of this new Skywalker family book, it’s tough to pin down any kind of truth when it comes to the Chosen One. (Again, Rise of Skywalker happened, Rey had to re-balance the Force!)

The idea of an alternate world with Qui-Gon as Anakin’s master is interesting for a lot of reasons. For one thing, it’s possible that Qui-Gon would have had to leave the Jedi Order to actually train Anakin. Recall that in The Phantom Menace, the Jedi council straight-up tells Qui-Gon he can’t train Anakin.

By the time of The Last Jedi, Luke is not sure if the Republic-era Jedi really has their stuff together at all. The idea that Qui-Gon could maybe have trained Anakin to use his powers, while also rejecting some old Jedi dogma feels possible.

Ahsoka is a good model for this. Sure, by the time of The Mandalorian, she’s self-identifying as a Jedi. But, during Rebels, Ahsoka specifically says “I am no Jedi!” and instead, forges her own path as a do-gooder who uses the Force and busts-out lightsabers.

Could Qui-Gon and Anakin have had a similar path had Qui-Gon lived?

There’s no real indication that Lucasfilm would ever actually do a bunch of new “What If?” stories set in the Star Wars galaxy. Yes, back in 2001, Dark Horse Comics did do some great alternate history stories with Star Wars: Infinities, but at the moment, it feels unlikely that contemporary Star Wars canon would go there.

Of all the “What If?” moments, the death of Qui-Gon feels the ripest for exploration. Anakin’s status as “the Chosen One,” was simply repeated by Obi-Wan out of loyalty. Qui-Gon believed Anakin was the Chosen One, but as Anakin grew-up, it’s clear he was gaslit into believing he was the Chosen One by people who distrusted the term on principle.

The idea that Anakin was always “destined” to become Darth Vader is engrained into our reading of Star Wars. But this kind of thinking also robs characters of agency. In some senses, the unevenness of the sequel trilogy actually gives people like Kylo Ren and Rey more agency, because you never feel like the story must go in one direction or another. When Ben Solo makes choices in Force Awakens or Rise of Skywalker, it doesn’t feel like the will of the Force, it feels like a choice.

Sadly, for Anakin, after the death of Qui-Gon, that kind of agency never really seems possible. The narrative pushes the character toward what he had to become.

We deserve another take on the Chose One: An alternate universe in which Anakin Skywalker became the Chosen One — but never became Darth Vader.

Skywalker: A Family At War is available at booksellers everywhere on April 6, 2021.