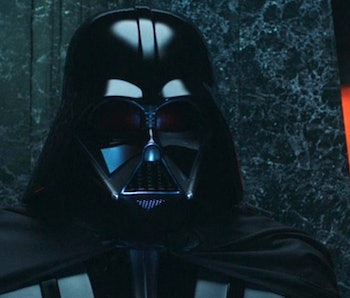 At the end of Obi-Wan Kenobi Season 1, Ewan McGregor’s exiled Jedi Master and Hayden Christensen’s Darth Vader clash lightsabers in a fateful duel. Their battle, which ranks as one of Kenobi’s best sequences, concludes with Obi-Wan and Darth Vader engaging in a surprisingly frank exchange about Anakin’s fall to the Dark Side.

This dramatic and powerful sequence delivers many of the beats that Star Wars fans had hoped they’d see in Obi-Wan Kenobi. However, it turns out that one of the original versions of Obi-Wan and Darth Vader’s climactic duel ended very differently than how it is depicted in the Disney+ series’ sixth episode.

A Different Outcome — As some Star Wars fans may already know, Obi-Wan Kenobi was originally conceived as a spin-off film in the same vein as Solo: A Star Wars Story.

However, following Solo’s disappointing box office performance, Lucasfilm drastically changed its plans for Kenobi. The project eventually transformed from a standalone film into the Disney+ series that was released this year. Stuart Beattie was one of the writers brought on to write the project when it was still planned as a feature film.

Beattie’s script ended up inspiring Obi-Wan Kenobi’s general story and many of its biggest moments, including the series’ climactic duel between Darth Vader and Obi-Wan.

In a recent interview with The Direct, Beattie, who is credited as one of Kenobi’s writers, revealed that Darth Vader and Obi-Wan’s lightsaber duel concluded very differently in his screenplay.

Beattie revealed that “Vader won” in his version of Kenobi’s third-act lightsaber duel. “They were fighting on this space station,” he said. “It was falling apart in the atmosphere of this big planet, and Obi-Wan basically fell off. Vader pushed him off, and they separated.” Beattie added, “If Obi-Wan has a chance to kill Darth Vader, he would do it. I mean, you know, how many countless lives would you save? Right?”

In other words, it sounds like Obi-Wan and Darth Vader’s climactic rematch didn’t end on the same odd, unresolved beat in Beattie’s script that it does in Obi-Wan Kenobi Episode 6.

Obi-Wan’s Complicated Victory — While Obi-Wan and Anakin’s conversation in the Kenobi finale is an undeniably great scene, it ends in a way that doesn’t feel totally natural.

After finally absolving himself of his guilt over Anakin’s downfall, Obi-Wan turns and solemnly walks away from the man who has not only spent a decade hunting and killing the galaxy’s Jedi but who will continue to do so for another nine years. It’s a moment that defies all logic.

There is simply no reason for Obi-Wan to let Darth Vader live at the end of Kenobi. That’s especially true considering the whole point of the duo’s post-fight conversation is to force Obi-Wan to accept the fact that Anakin is dead and that it was Darth Vader who killed him. Obi-Wan’s feelings for Anakin should no longer prevent him from ending Vader’s reign of terror. However, for some reason, Obi-Wan just walks away.

To have Obi-Wan walk away from his former padawan feels forced solely because canon dictates that Darth Vader can’t actually die until Return of the Jedi. What’s a Jedi Master to do?

The Inverse Analysis — There is no telling how effective Stuart Beattie’s original script would have been compared to what we got in the Disney+ series. Canon is canon. However, there’s no denying that the way in which Vader and Obi-Wan’s battle concludes ultimately defies internal story logic to preserve our meta-contextual logic of the greater Star Wars timeline.

The story needed some contrived circumstance that forced these two characters apart before they could complete their duel. In that sense, Beattie’s version of the fight would have, at the very least, explained in a sensible way why neither man succeeds at killing the other. Instead, it feels anticlimactic to watch Obi-Wan do what he always does: Demolish his “brother” in a duel and simply walk away. At what point does mercy become pure foolishness?