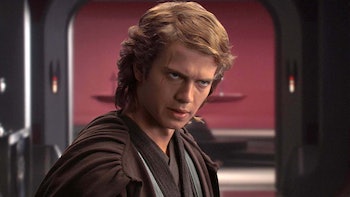 Anakin Skywalker turned to the Dark Side of the Force gradually. Although it seemed like he turned very quickly in Revenge of the Sith, his fall from grace and transformation into Darth Vader had been a long time coming. But what about his turn back to the light? With so much Vader action coming our way in Obi-Wan Kenobi, new comments from Hayden Christensen may indicate that we might be getting a bit more of Vader’s good side.

Speaking to EW, Christensen called his return to the role of Darth Vader/Anakin Skywalker “a natural continuation of your journey with the character. And that was very meaningful for me.” By “your journey” he clearly means the journey of us, the audience. But the phrasing is interesting in that he’s talking about taking Vader forward from the character we left in Revenge of the Sith, rather than thinking about Vader retroactively from the classic trilogy. In other words, Christensen is playing post-prequel Vader, not pre-A New Hope Vader.

Is this a distinction without a difference? Are we reading too much into everything that Ewan McGregor and Hayden Christensen say? Probably, but that doesn’t mean there’s not something interesting going on here. Elsewhere in the same interview, Christensen says that when he “saw Ewan as Obi-Wan again, that was a very special moment for me and one that I’ll remember for a very, very long time.”

Is this run-of-the-mill nostalgia? Or is there something deeper here?

If the story of Obi-Wan Kenobi was only going to feature Darth Vader as we knew him in the classic films, there would have been no reason to actually re-hire Hayden Christensen. After all, two different actors, Spencer Wilding and Daniel Naprous, played Darth Vader in Rogue One. His appearance there was comparable to his appearance in A New Hope in that he wasn’t really a character, but a symbol of the might and cruelty of the Empire.

So hiring Christensen to play Vader again presumably means that the story of Obi-Wan Kenobi must contain some twists. It makes no sense to bring back the actor who humanized Darth Vader if Obi-Wan Kenobi isn’t going to show us Vader’s sensitive side.

We know that Darth Vader can’t turn back to the good side of the Force in Obi-Wan Kenobi, but that doesn’t mean the character has to be depicted as pure evil. It’s been theorized that we could learn that Anakin actually didn’t slaughter all those kids in Revenge of the Sith, or that some momentary return to the light could happen in this new series.

But, more broadly, the simple fact that Christensen is back indicates that the story of Darth Vader will become more nuanced and complex, not less so. The tenor of every interview with Christensen doesn’t seem focused on how much ass Darth Vader is kicking. Sure, we should expect some Vader ass-kicking, but if Star Wars fans search their feelings, they’ll probably find that something else is going on here.

We know Anakin didn’t turn to the Dark Side in a day. But we also know that Darth Vader didn’t turn back in an instant either. The story of Obi-Wan Kenobi could give us that context. Not just the journey to becoming more like the Vader we know, but also the seeds for his redemption.