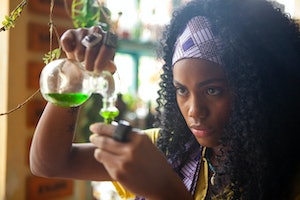 shows for fans of captivating action

It can be easy to get bogged down in the eternal churn of new Netflix shows, and the ones that get pushed to the top of the pile are often mighty similar. We love Stranger Things as much as anyone, but if you're looking to expand your horizons of science fiction or just enjoy a bit of virtual tourism, give one of these eight shows a try. There's a wide variety of international offerings on the streaming giant, ranging from criminally underrated shows to cult favorites.

First of all, this Norwegian show is not Thor: Ragnarok. In fact, it's much more Spiderman: Homecoming. Ragnarok is a teen drama depicting two adoptive brothers as they discover the Norse myths they were told as children may be truer than they first thought. This series also has a distinct environmental angle, using the destruction of natural resources as a catalyst for a clash between the Gods and the Giants.

Abyss is everything at once: a romance, a body-switching sci-fi, a murder mystery, and a bit of a legal drama thrown in there just for fun. Go Se-Yeun, an ambitious young lawyer, and Cha Min, heir to a cosmetics empire, find themselves in new bodies after their untimely deaths. This miracle was caused by an orb-like object called The Abyss, and together they must get through life with their new appearances and try to track down Cha Min's murderer.

Shadow is as close to a superhero series as you can get before crossing the line into the genre. This South African show follows an ex-cop as he is struck by lightning, somehow bestowing upon him congenital analgesia, otherwise known as an inability to feel pain. He does what anybody would do should they suddenly become immune to pain: he becomes a Batman-like vigilante figure who can take literally every beating. All the fun of a superhero show without all the...superhero-ness.

The premise for Russian Netflix Original Better Than Us is as adorable as it is intriguing: a family takes in a robot to act as a housekeeper/guardian/mother figure, not knowing she's a murderous robot on the run from an evil corporation. It's just as much a family drama as it is a sci-fi show, but it's used to its own advantage, each genre and storyline fueling the other. It's a hybrid show that balances the light with the gritty in a way that won't give you whiplash.

Cleverman is a unique Australian series that aired on Sundance TV in 2016 and 2017. It directly incorporates Australian indigenous mythology and folklore to build its world, based on the Aboriginal concept of Dreamtime. It follows Koen and Warruu as they deal with the conflict between humans and hairypeople, a sort of feral, not-quite-human population contained within a certain zone. Things only get worse when Koen inherits the superheroic powers of the Cleverman, despite Warruu hopes he'd be next in line. Cleverman uses its othering storyline as allegory for racism, immigration, and border detainment in a way that will hit home for everyone.

Reality Z is a zombie show for 2020, combining classic "safe house" tropes with an unexpected setting: a Big Brother-like reality tv show. An adaptation of Dead Set, created by Black Mirror mastermind Charlie Brooker, Reality Z takes things even further by adding a gimmick to their in-universe reality show: a Greek mythology theme. So if you've ever wanted to watch a bunch of 20-somethings in gold togas fighting off zombies, here's your chance.

Always a Witch is a time-travel show where things are suddenly less advanced than first thought. Carmen was burned at the stake for being a witch in 17th century Colombia, but she makes a deal with an evil wizard to transport herself to the modern day, where there's no trace of witchcraft anywhere. The only catch? She's not allowed to use magic either. In its first season, Always a Witch gets off to a rocky start with its race politics (Carmen was a slave in the past) but sets its path straight in Season 2, with some pirates to boot.

Dark is, without a doubt, the most complicated show on Netflix. Incorporating time loops, paradoxes, future selves, and eventually parallel universes, there's nothing this show will shy away from. It trusts its viewer to keep track of all the timelines somehow, and if you do, be it by careful watching or one of the many fan-made diagrams, you'll find a gorgeously woven tapestry of family, legacy, true love, and a good helping of teen angst.