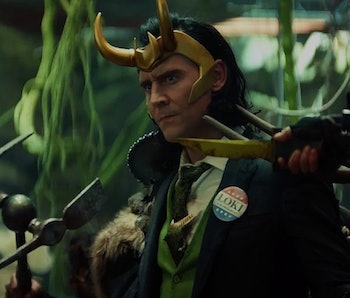 In a way, Loki is a spinoff of an adaptation of an adaptation. The upcoming Disney+ series branches away from the trickster god’s main appearances in the Avengers and Thor movies. But those films adapt their characters’ Marvel Comics storylines, which were in turn inspired by Norse mythology.

Following all those steps away from ancient myths, much has been lost in translation. But one recent Netflix series brings versions of your favorite MCU characters back to their ancestral roots – with a very Riverdale twist.

It follows Magne Seier (David Stakston), a clumsy and near-sighted teenager with dyslexia, as he moves to the historic town of Edda with his family, including warm matriarch Turid (Henriette Steenstrup) and angsty brother Laurits (Jonas Strand Gravli). But as Magne settles into his new life in Edda, he must confront these harsh truths:

While learning all this, Magne also meets Isolde (Ylva Bjørkaas Thedin), the annoying environmentalist in class. They bond, and she reveals her discovery that the Jutuls are contaminating Edda’s drinking water. But Magne’s sudden super-strength isn’t something she can help with – at least in the short time before an early, deadly twist forces Magne to question which locals he can trust.

Across its first season, Ragnarok succeeds as a hip, modern retelling of Norse mythology in which existing myths are set to repeat themselves. Magne slowly realizes he’s destined to become the God of Thunder, while the Jutul family’s members are not just powerful figures in local society. They’re also the mythological Norse giants, ancient beings who warred with gods.

But outside of that literal clash of the titans, Ragnarok offers plenty of smaller-scale drama. The first season alone is full of romance, drug use, characters experimenting with gender and sexuality – even a murder mystery. Riverdale wishes it could maintain this series’ brand of realism while reaching toward the dramatic and fantastical.

Season 1 premiered early last year, getting lost amid an early-pandemic streaming boom. Season 2 is now streaming on Netflix, and it contains even more mythology, Marvel-rivaling action, dream sequences, murder, and (of course) teen drama. In the new episodes, Magne’s army slowly grows as others like him emerge from the shadows – each with their own powers and MCU counterpart.

Laurits, Magne’s younger brother, goes on his own journey, confronting less-than-comfortable elements of his gender presentation and sexuality, while figuring out how his arc relates to his brother’s transformation and the Jutul clan’s scheming against Edda as a whole.

If you love Thor and Loki but wish both were depicted on screen more faithfully, then this is the show for you. Without feeling forced to retell Norse myths in exact detail, Ragnarok crafts its characters in a way that acknowledges their rich cultural histories without spoon-feeding it to audiences.

And when Loki rattles off something obscure about his home life in Loki, or Thor soliloquizes about the Midgard Serpent in Thor: Love and Thunder, you’ll know exactly what they’re talking about – thanks to some super-powered, super-angsty Norwegian teens.