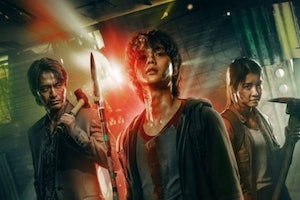 SHOWS FOR FANS OF HIGH-CONCEPT THRILLS

Too many genres fly under the radar on Netflix. Underneath the Tiger Kings and Queen's Gambits, there's a whole world full of French dystopias, Spanish allegories, and Taiwanese ghost stories. But probably the most maligned of these genres is the Korean drama. K-dramas are usually written off as fluffy, feel-good romances, but many are positively gripping tales with some sort of fantasy and sci-fi twist and, yes, the occasional romance.

Here are six Korean sci-fi series worth the watch in 2021.

Watch if you like: the weird demonic dynamics in Lucifer

Black is the perfect example of a romantic K-drama amplified with a twist. Han Moo-gang is a detective investigating a series of murders, but his romance with a woman distracts him from his work and puts him in danger. The only catch? She can see shadows of the grim reaper around people close to death, and he's actually a grim reaper personified.

It's a classic tale of star-crossed lovers and unlikely pairings, crossed with a fanciful depiction of childhood love and the afterlife.

Watch if you like: the fight-your-way-out survival of Stranger Things

Strangers from Hell, otherwise known as Hell is Other People, is the story of Yoon Jong Woo, a young man who gets a clutch internship, but is forced to live in a low-income dorm full of strange characters. What follows is a dark, murderous and gory story as he realizes he has no sanctuary — his living quarters are full of killers, cannibals, and psychopaths. He must kill his way out.

By the end of the series, it's hard to tell if his exposure to his neighbors is what made him willing to kill, or if that was his nature the entire time.

Watch if you like: the supernatural romance of Buffy the Vampire Slayer

There's nothing better than a ghost love story. Forbidden love is one thing, but love that crosses a mortal plane is on another level. This series follows Park Bong-Pal, a professional exorcist saving up for a procedure to have his medium powers removed. However, he encounters Kim Hyun-Ji, a friendly, spunky ghost who died of a traffic accident and believes Bong-Pal is her ticket to the afterlife.

As they slowly fall in love, a malevolent spirit who caused Hyun-Ji's accident stalks them, and they must work together to defeat it.

Guest combines a ghost story with a story of reuniting friends, starting by introducing three children — Yoon Hwa-pyung, a young psychic, Choi Yoon, who was born into a very strict Catholic family, and Kan Kil-Young, the daughter of a detective. These fateful three meet when their families are all murdered by a possessive demon known as Guest.

Twenty years later, each of these characters have followed in their family's footsteps. Hwa-pyung is a taxi driver who rescues passengers in supernatural trouble, Yoon is a priest specializing in exorcism, and Kil-Young is a skeptical detective. They collaborate to defeat Guest after another recurrence of demonic murders, and deal with their own trauma along the way.

Watch if you like: the ragtag supernatural friendship of Being Human

The premise of this show is simple: three people with supernatural powers run a little bar. That's it! Weoul-ju is a less-than-friendly woman from 500 years in the past, a disgraced healer sent to the future to save 100,000 souls as punishment. She hires Han Kang-Bae to help her run a pop-up bar, as he has an innate ability to get people to spill their troubles. Keeping close watch on both is Chief Gwi, a former Afterlife Cop with a history with Weoul-ju.

Together, these three listen to their patron's problems and help them solve them, all trying to gain the 100,000 souls Weoul-ju needs to make penance. It's Cheers meets Dark Souls!

Watch if you like: the apocalyptic horror of The Walking Dead

Sweet Home made a splash on Netflix in December 2020, and for good reason — it's quite the combination of all the shows above. Sweet Home follows Cha Hyun-soo as he moves into a new apartment building right as the apocalypse happens, turning all his neighbors into monsters that look like their deepest desires. That's enough of an ordeal, but on top of it all, he's suffering from the same affliction.

This series takes the zombie trope and adds a horrifying twist — what if while you were fighting all the monsters around you, you also had to fight one inside you? Hyun-soo's determination against all the internal and external threats makes for a thrilling watch.