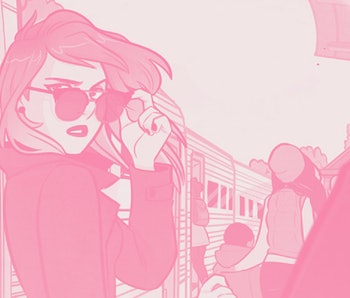 In a twisted turn of events, Nancy Drew, the iconic sleuth that helped birth popular fictional detectives like Veronica Mars and Riverdale’s Betty Cooper, was killed off in the 90th anniversary comic, Nancy Drew and The Hardy Boys: The Death of Nancy Drew #1. That’s right, a comic surely meant to celebrate and honor the enduring influence of Nancy Drew murdered her instead, all so that some dudes can swoop in and save the day.

Nancy Drew and The Hardy Boys: The Death of Nancy Drew #1 kicks off a new mystery that sees the longtime friends of Nancy Drew solving the mystery of her death. The new comic from Dynamite Entertainment opens with them standing beside her grave. It's written by Anthony Del Col, with art by Joe Eisma.

Del Col said he’s a huge fan of Nancy Drew, so then why kill her off? Here’s what he told Comics Beat:

“Over the years, there have been a lot of difficult mysteries to solve in the lives of Nancy Drew as well as the Hardy Boys,” he said. “But I wanted to top them all, and so put together the ultimate case—solving Nancy’s death! Joe Eisma and I have had a blast really coming up with some twists and turns that all fans—new and old—of Nancy, Frank, and Joe will enjoy.”

The response suggests a story that will focus more on The Hardy Boys than Nancy herself, who lives on in The CW's Nancy Drew. By killing her off, they become more central to the story while she's out of the picture. That also means taking on the case that she had been working on in her absence, go figure.

Killing off Nancy Drew is a regressive way to celebrate the character disrespectful to her enduring legacy. What does that tell the legions of young women inspired by her over the years?

Sure, the famous detective could have faked her death or someone else did to lure The Hardy Boys into the unsolved mystery she left behind. Regardless of the reasoning, fridging Nancy Drew is not as boundary-pushing as one would think. History has shown that killing off women to place the narrative focus on men is not unique or new in any medium. That it continues even now is just anachronistic and distasteful.

As a staple of the popular detective books written under the pseudonym Carolyn Keene, Nancy Drew has become a feminist icon and killing her off on her 90th anniversary is not a great look. Unsurprisingly, the decision has drawn the ire of online observers:

One frustrated fan decided that Nancy did indeed fake her own death because if she's going to die, she'll do it on her own terms.

The funniest response to all this may be the one below. Clearly, Nancy Drew and Mr. Peanut loved each other and faked their own deaths to be together because, why not?

Nancy Drew and The Hardy Boys: The Death of Nancy Drew #1 will be out in April 2020.