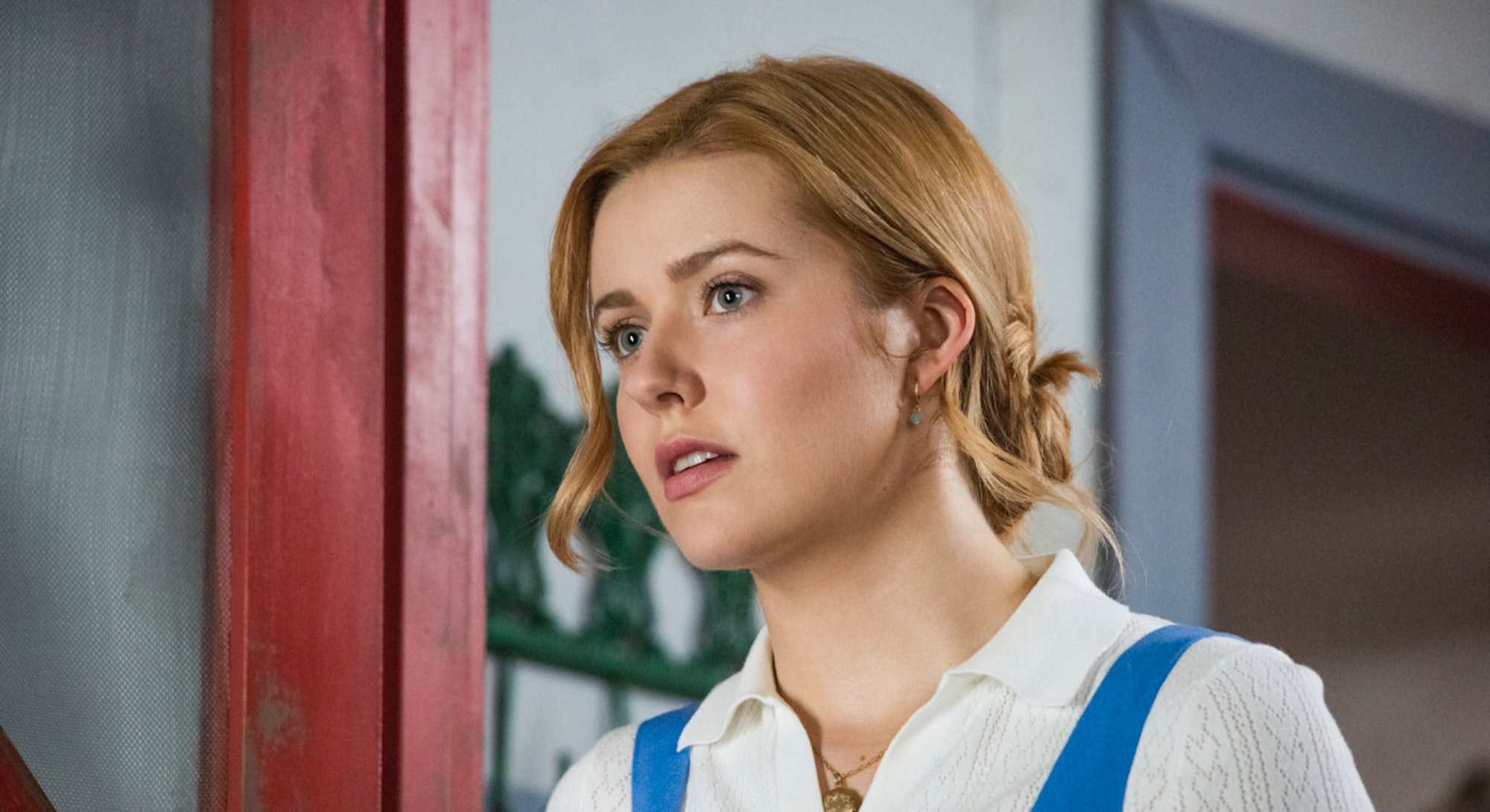 Book lovers everywhere, rejoice! Nancy Drew has finally gotten her own series. While this isn’t the first live-action adaptation of the beloved teenage sleuth, an updated TV adaptation for 2019 means there’s room for further exploration into the mystery book series and what exactly makes Nancy Drew tick.

With the series premiere of The CW’s Nancy Drew, and the obvious inspiration it draws from Riverdale and Veronica Mars, Inversers Mae Abdulbaki and Chelsea Szmania ponder whether Nancy is the detective we need in 2019, Nancy’s relationship with her dad, the tale of Dead Lucy, and more.

Warning! Spoilers ahead for the Nancy Drew Season 1 premiere.

This adaptation is clearly inspired by Riverdale and Veronica Mars. Given that Nancy Drew came before both, is she the sleuth we need in 2019?

Chelsea: There was the introduction of Nancy Drew in the 1930s, who ultimately paved the way for a character like Veronica Mars in the early aughts, but it’s always felt like Veronica was a punched-up version of the wholesome teen detective she’s inspired by. 2019’s version of Drew feels a bit watered down if we’re drawing comparisons — and it’d be hard not to given the obvious similarities! Even Riverdale’s Betty Cooper, who is as apple-pie as they come, has more personality.

Mae: It’s definitely hard to not draw comparisons between the three characters. Nancy Drew was already described as a show for the “post-Riverdale generation”, so even the producers have drawn from the aforementioned show. That comparison will probably remain unless Nancy grows into her own. On the one hand, she is very likable and resourceful. On the other, it still doesn’t feel like she’s the one driving the story and she often gets lost amid the other characters. A more developed storyline and a bit more focus will go a long way.

Chelsea: Why is it that every other character’s storyline is more interesting than her own? One cannot simply have gumption without first giving us some background. She supposedly has a bad rap with the local police in Horseshoe Bay because of all her past sleuthing (can we say Veronica Mars?) and she allegedly made a name for herself by solving cold case after cold case when she was a kid, but this show exists solely on a whole lotta telling and not a lot of showing, which leaves us with a handful of tired TV tropes. The foundation is there — it’s just not a well-developed one.

Mae: Nancy is fine, but she’s not necessarily a character I’m rooting for right now. Her reasons for investigating are paper thin at best and there’s a lot about her that’s probably meant to be edgy. Cool, she can break into places and get information, but what exactly is motivating her to do that? If they went ahead and killed her mom for drama (I know she’s also dead in the books), why not use that as part of the reason she goes back to being a detective? It would have at least been a bit more compelling.

Nick is obviously not the killer, but why do they so badly want us to believe he is?

Mae: While it seems like everyone in the pilot could be the killer, the writers really hone in on Nick as the culprit. He and Nancy are just starting off their relationship and he seems sweet enough, but the fact that he has a criminal record seems to lean more towards being a stereotype than a red herring.

Chelsea: It feels like a stereotype because, at this early point in the series, I don’t have much invested in any of these characters, including Nick, so there’s really not much at stake here. Their relationship is so premature that I find it odd this was even a storyline to begin with.

Mae: I think Nancy being suspicious of Nick would’ve worked a lot better if they’d already been in a long-term relationship at the start of the show. You want us to believe he’s really a bad guy? Fine. The only way to raise the stakes is to give them a layered history and then have Nancy question him. Otherwise, we know he won’t be the killer because the pilot’s trying too hard to make it seem like he is and it’s especially weird considering Bess has also been to jail, but isn’t scrutinized as much.

Chelsea: This whole Nick storyline is trying too hard to distract us from the bigger mystery at hand, and in doing so, I’m even more convinced their relationship is a big ol’ waste of time. Whatever happened to a little buildup and, I don’t know, chemistry? If Nancy Drew is trying to follow the sexy teen drama model, it’s seriously failing.

There were plenty of Easter eggs in the pilot. What was the biggest nod to the Nancy Drew books?

Mae: The biggest Easter Egg was, of course, Nancy’s foray to the attic. While there, she discovers an old trunk that’s hiding the dress Lucy Sable was wearing when she died. It’s a nod to Nancy Drew 21, The Secret in the Old Attic and it even pays homage to the book’s cover, which shows Nancy opening the lid of an old trunk.

Chelsea: I love that this series isn’t ignoring its roots. This is the kind of book series that has remained prevalent across the decades as a new generation of young girls look to Nancy Drew as inspiration for the kind of woman they hope to one day be or perhaps already are. A compelling plot and a familiar protagonist draws us in, but it’s this kind of fan service that will keep us engaged to find out what Easter egg could possibly crop up next.

Nancy has a strained relationship with her father, which isn’t the case in the books. Is that warranted?

Mae: I admit to not having read the books, but Nancy and her dad seemed close enough from what I’ve read. However, creating tension between her and her dad on the show doesn’t really work because we haven’t been given the full story yet. So far, it’s a bit more contrived than anything, as though Nancy really needs a reason to be angry at someone and her dad is right there.

Chelsea: There needs to be some kind of motivation for Nancy to be compelling as a character, and the obvious problems she has with her father create the kind of depth that we’re looking for, but this father-daughter relationship is hollow without any real character development. Which begs the question: Are any of the relationships in her orbit worth investing in?

Mae: That’s fair, though I admit to being somewhat invested in Nancy and George’s relationship. It’s the most authentic one so far and their antagonist relationship makes sense because their history together is explained. George was teased and Nancy let it happen. The tension is far more palpable between them. Whereas, Nancy’s relationship with her dad and Nick are fairly hollow in comparison.

Chelsea:: Yes — give us more scenes with Nancy and George! This is by far the most interesting dynamic on the show, and if their past doesn’t seriously warrant a flashback into high school, I don’t know what does…

Mae: A flashback would explain so much! Still, George is so multi-faceted already and she and Nancy could be on the road toward a reluctant friendship and I’m here for it. Going back to Nancy’s dad for a sec. It baffles me why a lot of these shows won’t let the titular characters form good relationships with their parents. Is every parent supposed to be shady and have secrets? I really want to know.

Lucy Sable adds a supernatural element to the series. Is it strange for the show to include a ghost story?

Chelsea: The Riverdale-type world of everyone hiding a dark secret, small-town diners, and a palpable ‘60s aesthetic make for one crowded space as there continues to be a push for more of those “sexy” teen dramas (Chilling Adventures of Sabrina, the upcoming Katy Keene) we loved in the early 2000s. It could be argued that without the supernatural elements, Nancy Drew is essentially Riverdale — this narrative does, after all, revolve around a group of Teens With Baggage looking to right the wrongs of the messed-up town they live in by solving its greatest mysteries. The Dead Lucy narrative adds intrigue to a show that would otherwise feel far too saturated with what we’ve already seen time and again.

Mae: I actually think the supernatural element makes it even more like Riverdale, especially after their introduction of the Gargoyle King in Season 3. Riverdale may not have gone completely into supernatural territory, but it got awfully close. The addition of the Dead Lucy storyline in Nancy Drew seems like the answer to Riverdale being unable to go there. While it admittedly makes the town of Horseshoe Bay far more fascinating, it also invites a host of other questions — like why do ghosts exist in this universe? — that the series may not be ready to answer.

Chelsea: Riverdale got too big for its britches, and by that, I mean it took the fun elements of gothic horror and turned it up so much that we were left with a Season 3 finale that had so many explosive things happen, BuzzFeed needed to create a list just to keep track of it all, and yes, that unfortunately included the Gargoyle King storyline. It would be easy for Nancy Drew to suffer from the same pitfalls, but I think it has the capability to thrive in this supernatural-laden town given how many burning questions I have about this multiverse.

Mae: I just worry because not everything has to be Riverdale and there’s enough material from the books to give Nancy Drew its own unique spin. That said, I’m usually all about the supernatural. If the series can keep it contained, then it has potential.

Nancy Drew airs Wednesdays at 9 p.m. Eastern on the CW.