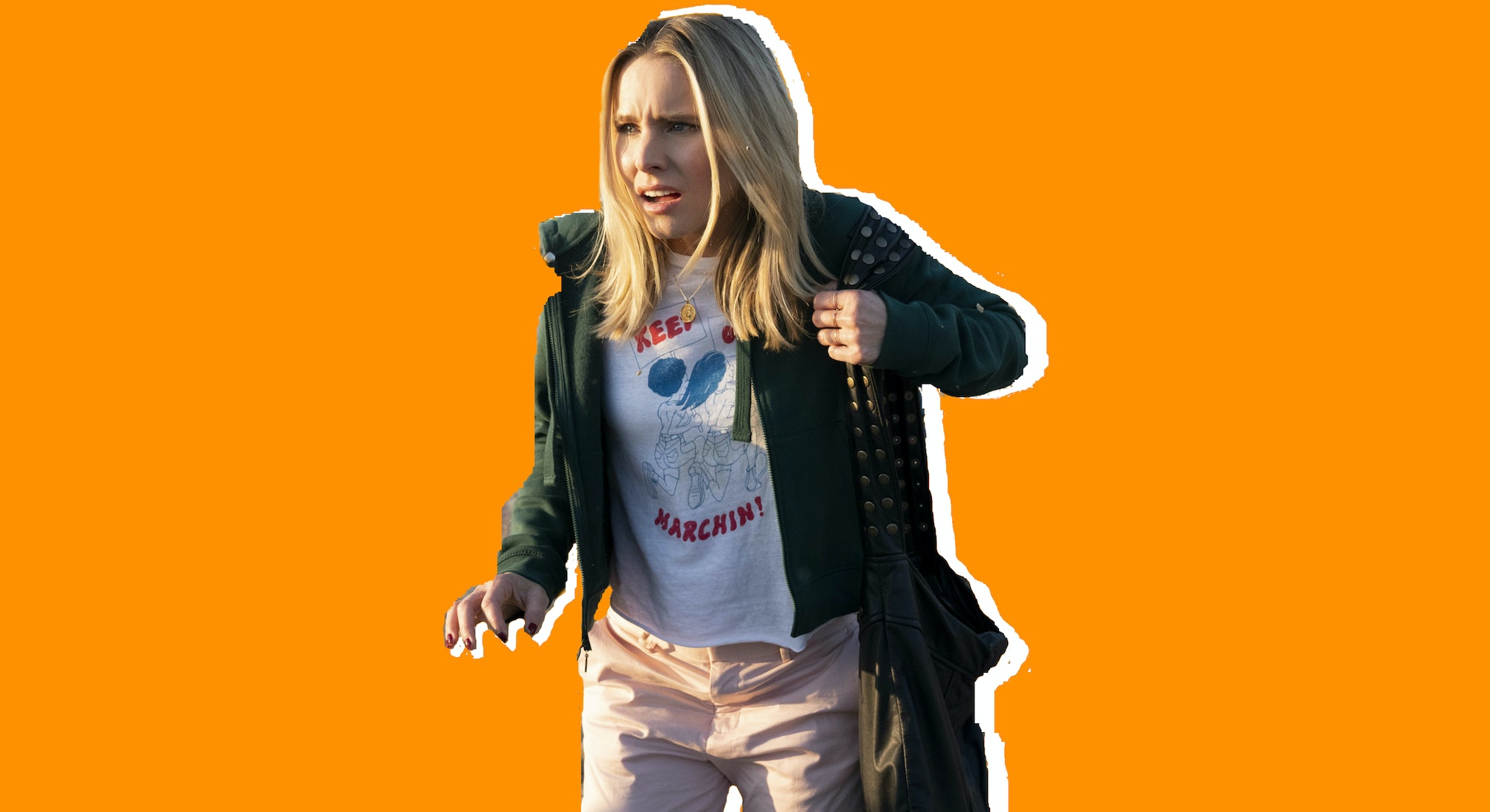 Veronica Mars herself announced the news on Friday that was both excellent and a little worrying.

Kristen Bell revealed during a panel at San Diego Comic-Con that all eight episodes of the fourth season of the series would land on Hulu all at once, a departure from a weekly schedule Hulu has previously stuck to with other shows.

Below, Inversers Chelsea Szmania, Mae Abdulbaki, and Allie Gemmill break down the five biggest questions about Veronica Mars for you, fellow marshmallows, and wonder what’s in store for an expected Season 5.

1. Was Veronica the Female Protagonist We Needed in 2019?

Chelsea Szmania: In 2004, the golden age for teen dramas, Veronica Mars was a refreshing take on a teen female lead: She was resourceful, brutally honest with a sharp, biting humor to match, and had a keen sense of the unfair class divide in Neptune. Fast-forward to 2019, and Veronica feels more foreign than familiar.

Veronica has always been guarded, but in Season 4, she is, at times, straight-up cold and unforgiving. The Veronica of earlier seasons would have fought harder to right her friendship with Nicole, and she wouldn’t have undervalued Wallace, her supposed best friend, to be nothing more than a boring married guy who hosts game nights that she can’t be bothered to spend time with. But, maybe, she’s just growing up.

Allie Gemmill: How Veronica Mars has developed characters this season has been a problem. It was a bold choice to conflate character growth with Veronica’s impulse to put walls around her emotions, only to get mad when people couldn’t meet her needs.

Veronica is fully an adult now, and yet it still feels like she’s made no attempts to address her trauma. Yes, there’s something to be said for taking time to deal with sustained, ingrained trauma at the level Veronica has seen, but when she is surrounded by people she loves who are also working on their own growth, hindering her own progress seems more harmful than helpful.

In 2019, the kind of female protagonist fans got in Veronica was one who seemed to willfully reject any kind of growth, or accept any kind of love which could heal her instead of satisfy her base needs. It was tough to watch Veronica in this way, because it alienated her from viewers and made her inaccessible. This is most assuredly not the kind of protagonist we need in 2019. Hopefully she can change a little bit before Season 5.

Mae Abdulbaki: It often seems series creator Rob Thomas prefers Veronica being a sarcastic badass in lieu of writing her with vulnerability and emotion. But it doesn’t have to be one or the other. Veronica can be both, but the 2019 version of her seems to be stuck in the past. The early seasons seemed to have more of a balance. As an adult, Veronica appears to have regressed.

She still approaches Weevil like a criminal (which also makes her look like a hypocrite considering the illegal things she’s done) instead of listening and being a good friend.

When Logan (of all people!) suggests she go to therapy, she shuts him down, instead of being thoughtful about the idea and goes so far as to say that she likes his old self better (even though he was always angry). Instead of supporting who he is now, she recalls his unhealthy past behaviors with fondness, making her look uncaring and unwilling to see how someone could change and grow, including herself.

2. That Logan Ending: Was It Necessary?

Chelsea Szmania: Perhaps the biggest surprise of all was that now-infamous ending. Logan did not need to die for there to be a compelling journey for Veronica into Season 5, despite what Thomas has to say about it.

Shedding Veronica of her teenage past makes sense, but by killing off Logan, she’s immediately thrown back into that tired routine we’ve seen time and time again: woman needs something bad to happen to her to give her a reason to be interesting.

The grown-up version of Veronica and Logan’s relationship is a pleasure to watch. They had refreshingly honest obstacles to navigate in their adult relationship. (Towing the line between independence and putting in the needed time for a relationship to work comes to mind.) It’s just too bad we didn’t get to see any of that play out.

Allie Gemmill: It’s a helluva choice to kill off the one man helping keep your protagonist connected to her sensitive side. Having Logan and Veronica get married after years together, all the time spent watching them find ways to get one another to open up and navigate a true human connection, only to rip it away when it seemed like everything was going to end well was borderline cruel.

Veronica didn’t need to watch Logan die. There was no reason he had to be sacrificed for the sake of storytelling. It felt like a cheap, dramatic jab in the end, and for what? To keep Veronica repressed and angry? Hard pass.

Mae Abdulbaki: Thomas admitted that he felt Logan had to die for Veronica to move forward in her life and, frankly, the idea that a loved one must be killed off for the protagonist to grow is not only antiquated, but lazy and cheap.

Veronica had plenty of time to deal with her issues — and with Logan’s help, too — over the course of Season 4, and she didn’t. The notion that she has to be alone and isolated to continue being a private investigator is regressive and bleak. It’s OK for Veronica to have some happiness in her life. That doesn’t make her any less of a fascinating character. Conflict can be mined through other means, and creating drama by way of a major death and then skipping a year ahead is a sign of a writer’s lack of creativity. Additionally, Logan’s death is now just another trauma Veronica has to deal with on top of every other trauma she’s gone through.

As we’ve seen before, she’s not exactly good at dealing with them, so we’re back to square one. Admittedly, Logan is probably the one character who has grown the most since the original run of Veronica Mars, and Thomas’ decision to kill him off after he’s reached some semblance of normalcy and life balance is incredibly frustrating.

Chelsea Szmania: There were a few too many storylines thrown into the mix, and it would have been impossible to wrap them all up in just eight episodes. Will the show revisit Veronica and Nicole’s friendship or will that be abandoned now that she’s seemingly gotten out of Dodge? Is the show done with Weevil’s character arc, or will we finally get a better understanding of why he ended up on his risky path?

Mae Abdulbaki: Thomas will have to develop the characters in a way that doesn’t shortchange their emotional traumas. Several plot threads — the congressman’s storyline, the random man in the desert running for help, Penn being revealed as the Sea Sprite bomber, and even Weevil’s connections to Clyde — are left unanswered.

Many of these plot threads may have been introduced as red herrings, but it’s clear the season needed more than eight episodes to help wrap things up in a satisfying way.

If there’s a Season 5, Veronica Mars could do with less subplots and a lot more focus on consistent storytelling. It would do wonders for the show.

Allie Gemmill: A prime example of a loose end: At the end of Episode 4, “Heads You Lose,” we see a man riding around in the desert in what looks like a dune buggy. He stops and waits, watching a man who appears to be a hostage running away from his captors. This scene has zero ties to the rest of the story, and it’s never addressed in the rest of the episodes. Why was this included? What was Veronica Mars hoping to set up?

This season felt incapable of handling it’s multiple plot threads, and it only slowed down the season’s momentum.

4. Will Matty Hold Up as the New Veronica?

Chelsea Szmania: It became clear early on that Matty (played by Izabela Vidovic), a Mars sleuth in the making, was meant to serve as a replacement for Veronica. They not only possess a similar likeness (highly intelligent, clever, a burning rage of a thousand suns) but a shared motivation to seek revenge for the murder of their loved ones.

If given the time and attention she deserves, Matty could be the titular protagonist that future seasons need, but as it stands, this Marshmallow is not convinced.

Allie Gemmill: Matty is definitely going to have big shoes to fill if she is going to start working at Mars Investigations alongside Keith.

Matty also seems to be a bit more cunning about her actions than Veronica was in the past, which could pose a problem. Similarly troubling is that Matty doesn’t have the personal bond with Keith that Veronica does, which could lead to trouble between the two in the future.

Mae Abdulbaki: Matty could wind up being too much like Veronica in the sense that it’ll be a repeat of the original series with a new character. If done right, Matty has a lot of potential. But there’s still a lot left to learn about her.

5. Was It Smart to Mainly Focus on the Overarching Mystery?

Chelsea Szmania: There’s always one overarching murder case that Veronica and her father, Keith, must solve, as is the style of Thomas. The Sea Sprite bombing, however, became so much of the focus of Season 4, that it felt like a lazy way to move the story forward.

By Episode 8, there were so many twists and turns, it turned into more of a parody of itself rather than the beach town noir that fans have come to love. Halfway through the finale, I found myself wishing it would just end already so we could move the heck on.

Allie Gemmill: Centering this season around a singular mystery was a notable shift from seasons past, but what’s wrong with making a bold choice every now and then? Although the mystery was handled clumsily, and there were some glaring plot holes as the mystery progressed, keeping the focus tight on that aspect of the world of Veronica Mars felt right. It was nice to check in with different characters, but there’s only so much screen time to be devoted to certain relationships and friendships. For my money, keeping the season focused on the mystery was the right move.

Mae Abdulbaki: Thomas has discussed many more seasons of Veronica Mars and how the show could go on until it becomes Murder, She Wrote, but by focusing too much on the mystery, Season 4 lost a lot of why fans were invested in the show to begin with: the characters.

After all, any serialized show like Veronica Mars has to focus on its characters driving the story or risk becoming Game of Thrones Season 8, wherein all character growth is thrown out the window in favor of spectacle.