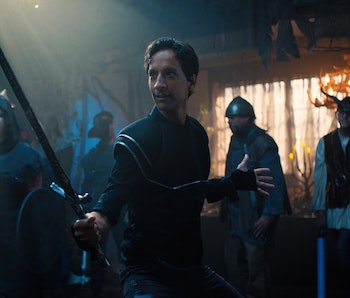 How many butt holes do you think Pootie Shoe would give Mythic Quest Season 2? I want to say five out of five.

Arguably one of the most underrated TV comedies of the streaming age, Mythic Quest has wrapped an incredible second season on Apple TV+. With the creators logged off (for now), many questions remain unanswered about what’s next for Ian, Poppy, and the rest of the overworked employees at Mythic Quest HQ. But will there be a third season of Mythic Quest?

Here’s everything we know so far. Bookmark this page and come back often. We’ll update this page with more information including its cast announcements and more when they’re available.

Is Mythic Quest renewed for Season 3?

Importantly, the show is not canceled or on hiatus, officially speaking. Creator and star Rob McElhenney told Collider that he is not “yet” working on a third season due to commitments to the fifteenth season of It’s Always Sunny in Philadelphia, which he called “the other show.”

“I learned from years and years of like, when you're acting, you show up at a certain time and then when you're done, you leave. But the problem is with writing is that you're never free from it. It's always in your head when you're walking around, when you go to the grocery store, you're walking the dogs. It's always there, unless you can compartmentalize and stop those thoughts. So I learned a very long time ago, which is I do not start thinking about whatever I'm working on until the first day of the writer's room.”

In other words: McElhenney isn’t shutting the door on more Mythic Quest. He just wants to finish up his existing prior obligations before continuing to explore it.

When will Mythic Quest Season 3 arrive at Apple TV+?

There is no premiere set for the third season of Mythic Quest. With McElhenney himself not clued in on when he will break its story, it’s anyone’s guess when or if the show will return. But It’s Always Sunny Season 15, which is keeping McElhenney busy, is expected to debut in fall 2021.

Realistically, if a third Mythic Quest season isn’t plotted or entering pre-production by the end of the year, a probable premiere in late 2022 or 2023 is likely.

Where can I watch the trailer for Mythic Quest Season 3?

There is no trailer for Mythic Quest Season 3.

Who will star in Mythic Quest Season 3?

While no official cast has been announced, it is a safe assumption that the majority of the principal cast of Mythic Quest will return for a third season.

What happened at the end of Mythic Quest Season 2?

The end of Mythic Quest Season 2, titled “TBD,” was a big one. The biggest shakeup to MQ HQ involved the departure of both the game’s creative director, Ian Grimm (McElhenney), and its lead engineer/co-creative director, Poppy Li (Charlotte Nicdao).

Throughout the second season, Ian and Poppy earned each other’s respect to such a degree they now see each other as equals. This arc was capped off when, in “TBD,” they decided to leave Mythic Quest — that is, the fictional MMO the series centers around — to create their own game. At the end of the Season 2 finale, both Poppy and Ian begin jotting down ideas for their new game on a restaurant napkin.

Their exit also leaves David (David Hornsby) in charge of operating Mythic Quest. As it’s been established that David isn’t well-versed in either creative direction or programming, how he’ll manage the game is sure to be... entertaining to watch, to say the least.

But those weren’t the only changes to the world of Mythic Quest. Brad Bakshi (Danny Pudi), the studio’s head of monetization, allowed himself to get arrested for a crime committed by his assistant, Jo (Jessie Ennis), to earn “street cred” as a moneyed executive.

Meanwhile, testers Rachel (Ashly Burch) and Dana (Imani Hakim) agree to a long-distance relationship as Rachel embarks on a creative writing education at Berkeley and Dana pursues game programming, with tuition paid for by the studio. What’s interesting is that both Poppy and Ian are the ones who signed off on Dana, who saw an ounce of potential in her demo. But with both Poppy and Ian now gone, will MQ HQ be able to live up to its promise to Dana?

Last but not least, C.W. Longbottom (F. Murray Abraham) had his backstory! told in the outrageously wonderful Season 2 episode, “Backstory!” With his grudge settled with estranged and terminally ill friend Peter (played by William Hurt), C.W. ends Season 2 with a fresh slate — and open possibilities as to where he can go next.

What is the plot of Mythic Quest Season 3?

We can only assume the third season of Mythic Quest will pick up where Season 2 left off. It is possible the show will follow Ian and Poppy striking out on their own to make a competitor to Mythic Quest whilst succumbing to their pride and egos.

Nicdao even teased this story in an interview with Forbes, saying:

“In Season 1, Ian’s the boss [and] Poppy is kind of his underling. And then [in] Season 2, they have this equal power. And then [in] Season 3, we’re going into this new space, hopefully, where Poppy has got a lot of power. It’s her idea. And I’m personally interested to see what she does with that and what it does the dynamic between the two of them.”

“As much as they'd like to think that there’s gonna be a new and fresh start,” adds David Hornsby, “I think on our show we want to push the ball forward and see, ‘Yeah, let’s put them into some new territory.’ Just like we’re doing this season with new pairings. But at the end of the day, they’re still who they are and so, I think we’ll some new paired with some old.”

For his part, McElhenney told Collider he believes he’s blown the show up:

“The number one thing you don't want to do at the end of a successful season of television is blow the show up. And so we thought, well, then I guess we're going to have to blow the show up. If we want to keep trying to stretch and keep trying to do something new and fresh, then we have to actually take massive risks. And the biggest risk that we could find there at the end, was to essentially end the show as we know it and see where it takes us.”