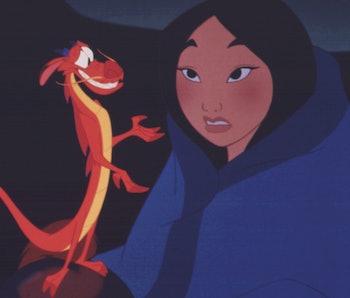 No Mushu for you, or anyone else. Maybe ever again. Disney revealed the reason it ditched the beloved walking, talking, and wisecracking dragon from its 2020 live-action Mulan remake, and it boils down to one word: China (aka, the world's largest market for theatrical films — especially right now — and a clear target for Disney's growth in the 21st century).

In a report published on February 26 by The Hollywood Reporter, everything from the coronavirus to the Hong Kong protests is covered in interviews with Mulan star Liu Yifei, director Niki Caro, screenwriters Amanda Silver and Rick Jaffa, and producer Jason Reed. The story also includes quotes from Dorothy Lau, a professor at the Academy of Film, Hong Kong Baptist University, and USC professor Stanley Rosen.

Overall, The Hollywood Reporter reveals a movie that not only worked to appease Chinese censors and tastes (the filmmakers removed a kiss between Mulan and a love interest because it "doesn't feel right to the Chinese people") but also transformed the story away from a family animated musical into a real, epic war drama.

"It's a woman's story that has been told for centuries but never by women, and we felt like it was really time to tell that story," said screenwriter Amanda Silver.

Although Mulan is a remake of the 1998 animated Disney musical film, the story is inspired by the legend of Hua Mulan, a 6th-century folk tale about a woman who poses as a man to join the Chinese army. It's a popular story that children in China grow up hearing about, which made it a choice story for Disney to produce in a time when the Chinese film market is as strong, if not stronger, than North America.

It was prioritizing the legend, not keeping a generational classic intact, that the filmmakers say was their goals for the film. That meant no musical numbers and certainly no Mushu.

Said Reed, "We had a lot of conversations about it ... [We wanted] to tell this story in a way that is more real, more relatable, where we don't have the benefit of the joke to hide behind things that might be uncomfortable and we don't break into song to tell us the subtext."

Mushu, Mulan's sidekick dragon voiced by comedian Eddie Murphy, was invented for the 1998 movie and wasn't part of the original Hua Mulan legend. But Mushu's absence in the new film's trailers confused western audiences who grew up on the animated movie.

USC professor Stanley Rosen said the character was seen as trivializing Chinese culture by Chinese moviegoers. "Mushu was very popular in the U.S., but the Chinese hated it," they said. "This kind of miniature dragon trivialized their culture."

"You have to deliver on the war of it," Caro said. "How do you do that under the Disney brand where you can't show any violence, gratuitous or otherwise? Those sequences, I'm proud of them. They're really beautiful and epic — but you can still take kids. No blood is shed. It's not Game of Thrones."

Still, after all the work it took to bring Hua Mulan's story to the screen in a way that doesn't look or feel exploitative with cartoon dragons, Mulan may not have a smooth theatrical release in its hero's native home. Fears of the coronavirus loom over the film, which is slated to hit theaters on March 27. Since late January, the outbreak has forced a shut down of all 70,000 theaters in mainland China, with no confirmed date to reopen. Disney's president of production, Sean Bailey, told the magazine he's "looking at it day by day."

Without knowing what will happen tomorrow, next week, or next month, the only Mulan audiences may get to see is still the 1998 film on Disney+. You know, the one with Mushu.

Mulan will open in theaters on March 27.

More like this
Entertainment
8.3.2022 10:00 AM
Lightyear’s post-credits scene secretly sets up a nostalgic Pixar sequel
By Dais Johnston
Entertainment
8.3.2022 11:00 AM
Zurg creator reveals the Marvel villain who inspired Lightyear’s nemesis
By Brian VanHooker
Culture
8.10.2022 11:30 AM
10 years ago, Jeremy Renner ruined the best spy-thriller franchise of the century
By Adrian Manuel
Related Tags
Share: