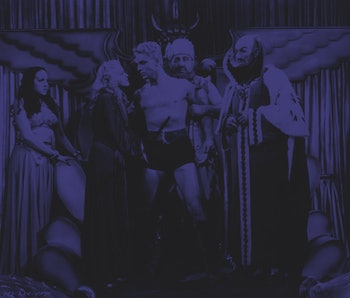 In 1976, at the Star Trek Bicentennial-10 convention in New York City, Nichelle Nichols was asked by Starlog reporters what she thought about the 1930s Flash Gordon. She replied with a joke: “Oh, Flash Gordon — our grandpa!”

For most of us, Buster Crabbe’s movie-serial version of Flash Gordon isn’t like a sci-fi grandparent; it’s more like ancient history.

While the 1980 kitschy feature film gets the lion’s share of the attention of Flash Gordon action, it’s fun to let this factoid sink in: that old ‘80s Flash Gordon was, at the time, a contemporary attempt to pay wacky homage to the good-old-days.

For better or worse, the original Flash Gordon serial is the ancestor of Star Trek, Star Wars, and a myriad other filmed sci-fi franchises. Here are two ways to watch it totally for free online right now, and what to expect when you do.

First things first. Premiering in 1936, Flash Gordon was not a TV show. It was a movie serial, which means the installments played in movie theaters. Sometimes this means the “episodes” played on their own, and sometimes they played before feature-length movies during a Saturday morning matinee. But, if you’re remotely confused as to why George Lucas decided to style the open text crawls to the various Star Wars “episodes” the way he did, look no further than the various installments of the 1936 Flash Gordon.

Like, if you think “Attack of the Clones” was a tough title to swallow, then you’ve never seen Flash Gordon Chapter 3: “Captured by the Shark Men.” Like all the Flash installments, these individual episodes began with text on the screen, letting you know what had happened in a previous installment. (For example: watch out for those Shark Men. Seriously.)

Now, it’s a simple fact that it’s impossible to view Flash Gordon objectively, because of its stylistic influence on the structure(and occasionally terrible dialogue) of Star Wars. But, more hilariously, let’s talk about how meta and weird it was when George Lucas decided to make the 1977 Star Wars retroactively into “Episode IV.” He was pretending like Star Wars was a Flash Gordon-style movie serial that had already been going on, and that we all just happened to miss the first three installments. If the original Flash Gordon had pulled this same trick, people would have been driven insane. Wait? What did I miss? Why is the Shark Man episode Chapter 3 if there are no Chapters 1 and 2?

The point is, even if you personally remember a time when Star Wars Episode I didn’t exist (I do!), it’s still pretty weird when you think about that through the lens of what Lucas was actually referencing, Flash Gordon.

How to watch the 1936 Flash Gordon online

There are two ways to watch the 1936 Flash Gordon online. The first way is to hit up Tubi, where a condensed feature-film version of the serials exists, which was retitled Rocket Ship. However, because that version will lack individual episodes (with those fun subtitles), you can also watch the entire “show” complete with episode breaks on YouTube. In this format, Flash Gordon was retitled “Space Soldiers,” but that’s only because when it was aired on TV in 1954, there was another “new” Flash Gordon show happening at that time, too. However, the 1936 version is the one we remember for a very good reason.

Charting the history of where bizarre science fiction tropes come from is part of the journey of watching the 1936 Flash Gordon. But the other part is when you find yourself saying, “wait a minute ... is this talking bear actually an alien?” To call the 1936 Flash Gordon “goofy” is like saying books come from trees. If you think this nearly-century-old brand of sci-fi is outdated, you’re right. What’s interesting about watching Flash Gordon now isn’t to notice that it's timeless (it’s not), but instead, to notice what everyone has stolen from it.

Structurally, and in the broad strokes, half of the big “space opera” sci-fi that people get worked up about now can be found, in a less-evolved form, in Flash Gordon. Can you have Star-Lord’s machismo in Star Trek 2009 without Buster Crabbe’s Flash? No way. Would George Lucas have figured out how to make us worry about long drawn-out scenes where people are using a long-distance ray to knock down a spaceship? Again, no. From last-minute rescues to stressful scenes huddled in a cramped spaceship, nearly every plot device trotted-out in Star Wars, Star Trek, and Doctor Who can be found in Flash Gordon.

With Flash Gordon, talking bears and sick old-timey ray guns are just the tip of the space sword. In the 1980 movie version, Dino de Laurentiis played up all the repressed S&M aspects of the 1936 serial with kitschy glee. But in the 1936 version, they’re not really kidding, but they’re also not owing up to it either. Unlike the 1979 Buck Rogers, this muscular outer space hero isn’t self-aware at all. Buster Crabbe’s Flash is like if Chris Evan’s Steve Rogers never got to be funny. He’s a hunky square, and that’s the way he likes it.

Honestly, Crabbe as Flash is the greatest gift this throwback into sci-fi history can still give. Ever since the 1960s, science fiction TV and film often cribbed from Flash Gordon, but always with a little bit of intentional irony. Even William Shatner’s Kirk had a twinkle in his eye in Star Trek when he acted like Flash. And, by the time you get to Han Solo, the Flash Gordon influence is borderline performance art. But back at the beginning, it was a tiny bit more honest. Not better. Not even more creative. But certainly raw and bold.

Watch the 1936 Flash Gordon on Tubi or on YouTube.