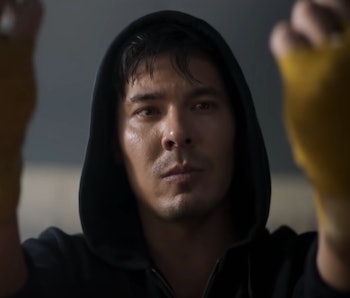 When the trailer for Mortal Kombat was released last week, fans were surprised to meet a new protagonist never before seen in the video games. Cole Young, played Lewis Tan, is a new character invented for the 2021 film (streaming April 18 on HBO Max) and a possible, if questionable, replacement for the cult favorite Johnny Cage.

But on Reddit, fans believe Cole Young is a secret legacy Mortal Kombat character in disguise. Here's what you need to know.

But First: HOW DID TV AND MOVIES GET YOU THROUGH THE PANDEMIC? We want to hear from you! Take this quick Inverse survey.

While it's Liu Kang who often takes the role of the heroic lead in the story of Mortal Kombat, it's now Cole Young who acts as the audience's vehicle into the lore of Mortal Kombat. But on Reddit's r/FanTheories, lifelong fan u/enonymous617 theorizes that Cole Young is secretly another Mortal Kombat character who still has a very sparse backstory... Chameleon.

"The first thing that struck me was his name: Cole Young," writes u/enonymous617, who says the name is too far afield from other Mortal Kombat monikers; it "doesn't sound cool" like Liu Kang or "strike fear" like Shang Tsung. "It's just a name, or is it?"

As u/enonymous617 writes, "What if Cole is short for Chamel?" Chamel Young. Chameleon. "Hiding in plain sight just like when he debuted in the video game."

Who is Chameleon in Mortal Kombat?

Unless you're a hardcore Mortal Kombat fan, you've probably never heard of Chameleon. In fact, you're probably already confusing him with Reptile, a different character with rather similar characteristics. (Both started out as secret characters, both are named after lizard creatures, and both have the power to imitate other characters.)

A lesser-known ninja with the least fleshed-out story and history in all of Mortal Kombat, Chameleon is an imitator ninja whose most unique trait is copying the powers of the other Mortal Kombat ninjas, including Sub-Zero, Scorpion, Noob Saibot, Smoke, and more.

After his first unofficial appearance in home versions of Mortal Kombat 3 (playable only with a Game Genie), Chameleon made his official debut in 1996's Mortal Kombat Trilogy as a secret character. He was accessible by inputting a specific button sequence when selecting any of the game's ninjas. During gameplay, Chameleon changes colors (a "palette swap") while being able to use all of the signature moves of the character Chameleon briefly imitates.

Another strange thing about Chameleon is his unusual lack of a story. This is strange for Mortal Kombat, where even joke characters get an entire Wiki page. Unlike the other characters of Mortal Kombat Trilogy, Chameleon doesn't get an ending screen in the story-driven arcade mode. Instead, the game just ends. (However, one "reward" players get to select is a one-on-one fight with Chameleon, who is introduced as one of "Shao Khan's deadliest warriors.") Chameleon has also never had any official artwork released by the game's creators. A Google search for "Chameleon" brings up only fan-made, Photoshopped artwork or screenshots from the game.

After Trilogy, Chameleon made one more playable appearance in 2006's Mortal Kombat: Armageddon. Once again, the ending reveals very little about Chameleon except that he had been "ever-present" since the first Mortal Kombat game and that "he had remained hidden from sight, waiting for his moment to come." Chameleon hasn't been playable in any Mortal Kombat game since, but has a cameo in the open-world krypt of Mortal Kombat 11.

Why Cole Young could be Chameleon

u/enonymous617 further theorizes that Scorpion and Sub-Zero seem to be on the hunt for Cole, because "they want to know who is borrowing their moves." Having watched the trailer about a dozen times myself, there is no indication that Sub-Zero and Scorpion are on the hunt for Cole, though they do cross paths in the movie. (Cole appears onscreen with both Sub-Zero and Scorpion in the trailer, in a blink-and-you'll-miss-it moment.) But that doesn't invalidate the theory, as Cole could still have a deep link to both characters — such as using their powers.

Furthermore, as Chameleon is one of Shao Kahn's "deadliest warriors," Cole Young could be a sleeper agent on Earthrealm. It's not an impossible twist to imagine Chameleon being sent to Earth, with his memory wiped while he lays low, and then "reactivated" by Shao Kahn when it's time. It would be a gnarly twist on a character like Cole Young, someone with virtually no history otherwise. Sounds just like Chameleon.

Mortal Kombat will begin streaming on HBO Max on April 18.