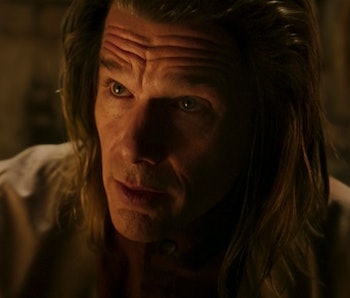 Heading into the premiere of Marvel’s Moon Knight, many comic book readers were convinced that Ethan Hawke’s Arthur Harrow would be revealed to be the modern-day Sun King. In the comics, the Sun King is the Earthly avatar of Amon Ra, the Egyptian god of the Sun, who’s both the father of Khonshu and his enemy. That, in turn, makes Amon Ra’s Sun Kings and Khonshu’s Moon Knights enemies too.

However, Hawke’s Arthur Harrow is actually the avatar for Ammit, an Egyptian deity who has the power to determine whether a person will one day commit a heinous act. Equipped with that knowledge, Harrow seeks to release Ammit from her tomb so she can erase all evil from the world by prematurely killing anyone capable of perpetrating it. Unfortunately, that’s a plan that has already been attempted in the Marvel Cinematic Universe.

Fury responds by telling Steve that the helicarriers are the product of Project Insight, a S.H.I.E.L.D. operation to eliminate any possible threats before they actually commit atrocities. Steve dryly asks, “I thought the punishment usually came after the crime?”

Unsurprisingly, Project Insight turns out to be a very bad idea. When it’s revealed that S.H.I.E.L.D. has been secretly infiltrated by HYDRA, the villainous organization attempts to use Project Insight’s helicarriers to eliminate anyone who is “a threat to HYDRA — now or in the future.”

Play It Again, Marvel — When The Winter Soldier was released, its Project Insight plot justifiably resulted in numerous comparisons to Minority Report, a film about a futuristic society where police use psychics to arrest criminals before they commit crimes. Now Moon Knight is reusing the same basic plot, but so far it isn’t telling it with nearly as much interest as The Winter Soldier and Minority Report.

If Moon Knight were bringing anything new to the storyline, its use of the idea might not seem quite as disappointing. However, the political commentary present in both Winter Soldier and Minority Report is absent from Moon Knight, and neither Harrow nor Ammit feel as intimidating or dangerous as HYDRA does in Winter Soldier. As a result, it’s hard to watch Moon Knight and not feel like Marvel is simply retreading old ground by reusing a plotline from one of its best films.

To make matters worse, Marvel really didn’t need to tell this story again. The studio could have easily made Hawke’s villain the modern-day Sun King to Oscar Isaac’s Moon Knight, and it could have used that conflict to tell the same story about two men being abused and taken advantage of by their gods that it’s currently trying to depict.

The Inverse Analysis — By choosing to throw out Arthur Harrow’s comic book backstory, and by making Ammit the primary antagonistic deity in Moon Knight, Marvel Studios has tried to come up with its own unique story for Oscar Isaac’s Marc Spector, one that largely exists separate from the comics. However, the studio has not only missed out on some storytelling opportunities that are present in several Moon Knight comics, but has also reused a storyline from one of its own movies.

It’s the kind of move that forces one to wonder if, after producing 30+ MCU shows and movies, Marvel is now struggling to come up with new stories to tell. If that’s the case, then Moon Knight likely won’t be the last time the studio ends up retelling a tale that fans have already seen play out.

More like this
Entertainment
Jan. 17, 2023
Guardians of the Galaxy 3's Adam Warlock reveal may be a big misdirect
By Eric Francisco
Entertainment
Jan. 25, 2023
The MCU could bring back a hero from its most underrated TV show
By Dais Johnston
Entertainment
Jan. 30, 2023
Doctor Who Could Become the New Marvel — But There's a Catch
By Ryan Britt
LEARN SOMETHING NEW EVERY DAY.
Related Tags
Share: