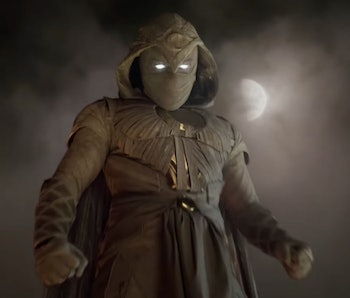 Moon Knight faced an unusual and difficult challenge. It needed to portray a dark, gritty superhero story, but it also needed to portray Dissociative Identity Disorder in a way that was accurate and didn’t add more stigma to a subject that pop culture has already struggled to show with accuracy and compassion. Season 1 sort of managed this, in that it clearly showed how DID works, but it still sensationalized the disease.

Oscar Isaac recently commented about a possible Season 2 of Moon Knight. Hidden in his words was a sign that the team behind the show has been doing their research, and could improve on the first season’s handling of mental health.

When asked at New York Comic-Con about a possible Season 2, Oscar Isaac demurred, but eventually said, “All I can say is that this isn’t the last we’ve heard of the system that is Moon Knight.” This doesn’t necessarily mean there will be a Moon Knight Season 2 — Marc Spector/Steven Grant/Jake Lockley could appear in a future Marvel crossover project — but regardless of how the character reappears it would be nice to see an improvement in how DID is handled.

But the final moments of Season 1 did hint at more to come, and if there is a second season it sounds like it could be more accurate to the specifics of Dissociative Identity Disorder. Isaac referred to the character as a “system,” which is the term therapists and people with DID use to refer to all their alternate personalities (or “alters”).

The term is a way for people to acknowledge that they are more than one identity. It’s a system akin to the cardiovascular or nervous systems: Different parts work together to achieve a common goal. In this case, the goal is to get through daily life. We saw these aspects in Moon Knight when Marc and Steven had to work in tandem to defeat Arthur Harrow.

Mental health is not a new subject for the MCU, but Moon Knight is probably the first time we’ve seen it explored so explicitly. For example, Wanda Maximoff appears to be suffering from PTSD after losing Vision, and we see her cope and lash out throughout WandaVision and Doctor Strange in the Multiverse of Madness. But even if the portrayal of her struggle was generally accurate (albeit superpowered), her condition was never named. Moon Knight was the first time we’ve seen a character’s diagnosis as a pivotal part of who they are.

If we do see a Season 2, Isaac’s comments hopefully reveal that Moon Knight will do further work to show that people with DID are just trying to live their lives.