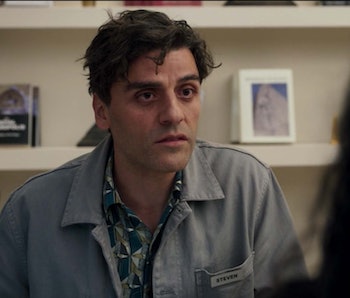 There’s always more than meets the eye in a Marvel movie or show. At least, at first. The Marvel Cinematic Universe is infamous for hiding blink-and-you’ll-miss-it Easter eggs in the background. And often, these hidden clues tease either what could happen next or draw a surprising connection between two different Marvel projects.

Moon Knight is no exception. While Episode 1 doesn’t seem to draw on too many MCU-related links, it does have a number of Easter eggs, including one that gifts viewers something special.

Scanning for clues — It’s easy to get swept up in Moon Knight Episode 1 as we are introduced to a new hero and world that are equally complex and fascinating. So of course, you may not have thought twice when you watched Steven Grant (Oscar Isaac) walk into work and pass by a QR code on a museum wall. Check it out in an official still from the episode below.

Luckily, though, some fans did, including TikTok user sarahelena930, and discovered the QR code actually works. It’s a bit tricky to scan (as the Tiktoker explains), but once it works, the code will direct you to a website where you can read a free digital copy of Werewolf By Night #32. This issue, originally published in 1975, is where Moon Knight made his Marvel Comics debut.

While most Easter eggs offer up foreshadowing or plot clues, this one gives viewers a free gift from Marvel Unlimited. The website also states that it will be updating weekly with more “exclusive Moon Knight comic books.” With that said, we expect Werewolf By Night #32 will be available to read for free until Episode 2 comes out on April 6. After that, you’ll need to revisit the site each week to see what other classic Moon Knight issues are featured.

The Inverse Analysis — Moon Knight is not the first superhero project this year to offer a comics-related hidden clue to fans. The Batman’s post-credit scene teased a Riddler-themed website that eventually revealed an announcement for the upcoming DC Comic, Riddler: Year One. The new comic book is a prequel to The Batman and written by The Riddler himself, Paul Dano.

In their search to find out how Moon Knight connects to the greater MCU, fans have clearly stumbled upon an unexpected gift. It may not tell us if Steven Grant (or Marc Spector) will run into an Avenger at some point in the series, but it does say that Moon Knight’s comics origins are important.

Between The Batman and Moon Knight, DC and Marvel are finding clever, new ways to invite viewers to read the comics that inspired the movie and TV shows they love.

More like this
Entertainment
Jan. 25, 2023
The MCU could bring back a hero from its most underrated TV show
By Dais Johnston
Entertainment
Feb. 3, 2023
Marvel just revived its primate assassin — What to know about Hit-Monkey
By Mónica Marie Zorrilla
Entertainment
8 hours ago
Ant-Man 4 Comment Debunks a Dark Rumor About Quantumania's Ending
By Eric Francisco
LEARN SOMETHING NEW EVERY DAY.
Related Tags
Share: