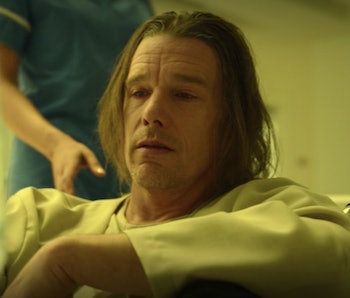 Moon Knight is a true globe-trotting adventure, bouncing from London to Egypt and even the afterlife. But it never falls into the eternally tempting trap of exoticism; it shows the world as it is, not as some strange foreign land like many blockbusters are wont to do. Egypt is simply another location, a place where people live and work among ancient ruins. It seemed like a change.. but then the post-credits scene changed everything.

Whether you’re watching a new Chris Hemsworth movie or old episodes of Breaking Bad, it’s hard to ignore the constant trope of the “yellow filter.” This term refers to a jaundiced hue that gets applied to scenes in “exotic” locals, especially Mexico, India, or other countries closer to the equator. Now, color correction and alteration has been part of the film production process since film was hand painted to add color, but in this case it feels anything but natural.

This can be traced back to Steven Soderbergh’s Traffic, which used colorization and filters to delineate between three different storylines, with the story set in Mexico using a yellow filter. But now, it’s everywhere, from James Bond to Arrested Development. That’s why fans were relieved when Moon Knight didn’t pull this tired old trick when the action moved to Egypt — Mohamed Diab, the Egyptian director, presumably knew just how unrealistic it is and avoided it.

Then, in the last moments of Moon Knight, this was negated. The post-credits scene shows Arthur Harrow in a mental facility, only to be brought out to a limousine where Khonshu is waiting. Khonshu reveals his new avatar is the mysterious third personality of Marc Spector/Steven Grant, the Spanish-speaking Jake Lockley. All of this is shown with the yellow filter.

It’s clear the scene is set in London: We even see them drive off towards the skyline. But it’s tinted a sickly yellow in a way that makes it look like the entire thing is set in either a “third-world” country or a dream, and presumably this is one of the few Moon Knight scenes we can be sure takes place in reality.

So why was this scene tinted yellow? Well, there are two theories. The first is subversive. Most viewers expect this filter to be used in foreign countries, so using it for a scene in London subverts the expectations and underlines the uneasiness of the sudden realization that Marc isn’t the “crazy” one here, but Harrow.

The second explanation is more disappointing: Unlike the Jake Lockley of the comics, this Jake speaks Spanish. Could this “exotifying” filter be used not to make a location seem otherworldly, but the character of Jake Lockley? Regardless of the reasoning, the choice is noticeable. Hopefully it’s not a slip back into the lazy and harmful visual shorthand of the past.

More like this
Entertainment
Jan. 25, 2023
The MCU could bring back a hero from its most underrated TV show
By Dais Johnston
Entertainment
Jan. 30, 2023
Doctor Who Could Become the New Marvel — But There's a Catch
By Ryan Britt
Entertainment
Jan. 20, 2023
Surprise Invincible Season 2 trailer reveals late 2023 premiere
By Eric Francisco
LEARN SOMETHING NEW EVERY DAY.
Related Tags
Share: