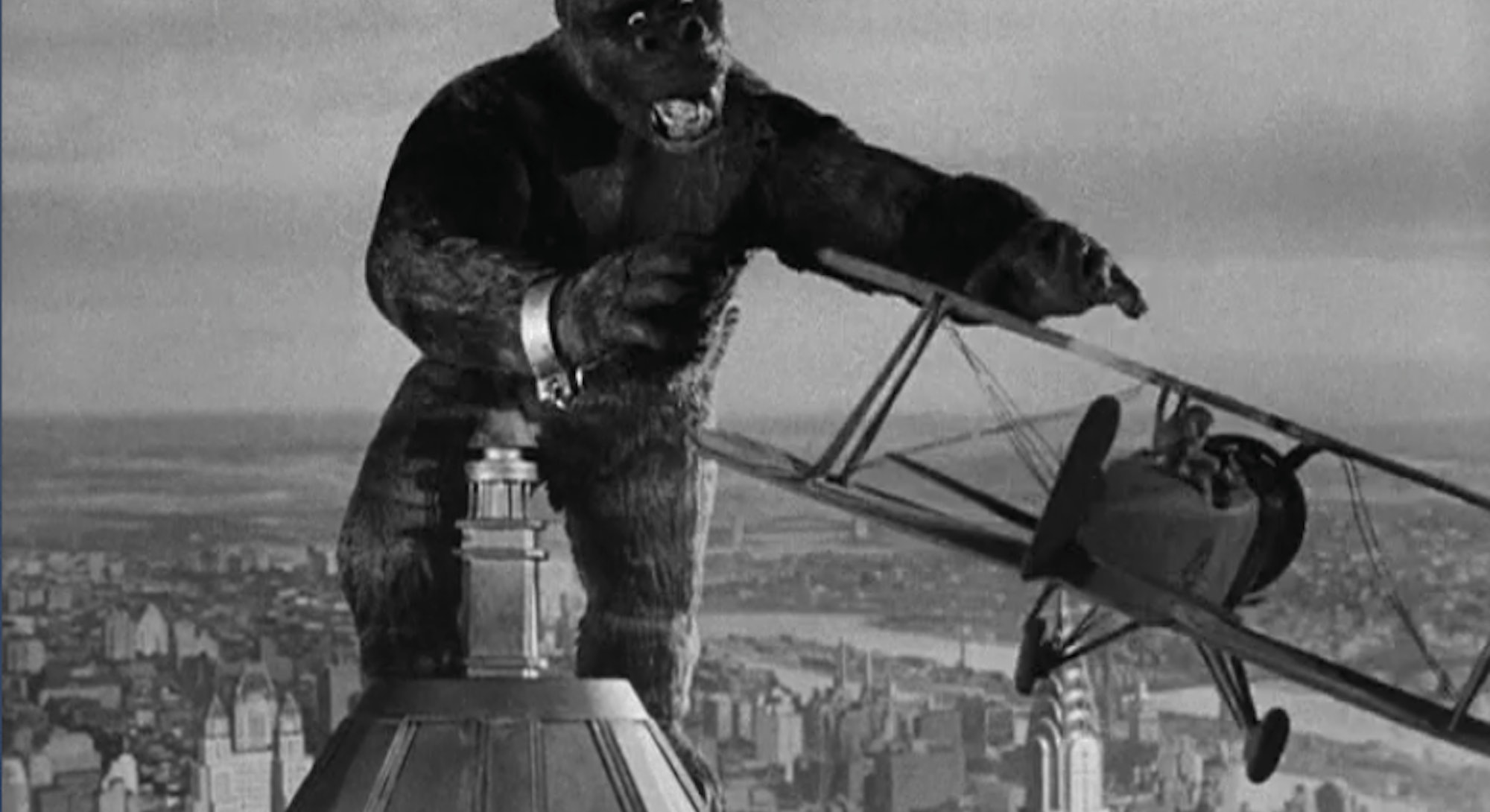 Kong: Skull Island features the biggest version of the legendary primate yet, tossing helicopters and wrestling monsters in between scenes that more quietly reflect on the ravages of war. Kong is a marked progression for both the titular gorilla and the politics underlying the story of his discovery. The movie is the third remake of the 1933 original, which, to the modern eye, is both charming and unshakably retrograde in its racial themes and depictions.

To track the development of the famed monster over the years, Inverse spoke with Kong scholars John Michlig, author of Eighth Wonder and Cynthia Erb, author of Tracking King Kong: A Hollywood Icon in World Culture, who offered insight to the various iterations of the ape.

Directed by Merian C. Cooper and Ernest B. Schoedsack, the original film was a smash hit that utilized cutting edge stop-motion technology and took audiences on a new kind of exotic adventure. Cooper was a famed fighter pilot, journalist, and adventurer, who wrote stories about far flung locales around the globe for Americans who could hardly fathom places so far away.

King Kong is a fantastical depiction of those far-off lands, with a meta story that featured a movie crew that stumbles upon primitive, almost animalistic local villagers. Those villagers are the worst kind of stereotype: They dance around in loincloths and coconut bras, commit human sacrifice, try to trade six of their women for the production’s blonde woman (Fay Wray), and worship a gigantic beast that kills them. It is, by today’s standards, ridiculously racist, though Michlig notes it was more reflective of common attitudes in the 1930s than any political statement.

“It was just taken for granted that you could make a story point that a pale woman with blonde hair is much more valuable than any of the other women that happen to be on the island,” Michlig says. “The fact that you have firearms gives you some upper hand, but there was a whole island full of people there who couldn’t overcome these people for some reason. But that was just the thought back then, that if you come from the higher civilizations, you’re going to easily overthrow whatever small island you go to.”

The movie’s protagonist is a director named Carl Denham, who served as a stand-in for Cooper himself. The co-director was a fighter pilot, prisoner of war, explorer, writer, and filmmaker; he was one of those turn-of-the-century renaissance men whose adventures made the world smaller and inspired generations of wide-eyed kids. But those trips were not made in goodwill or in search of lessons from new cultures that he respected as his equals — an attitude that bled into the film.

“There’s passages in some of Cooper’s memoirs, where he’s describing a native village, and because he’s the white man from an industrialized civilization, he says he’s just going to confront the leader of this entire village and basically dress him down like he’s a child in front of his whole tribe,” Michlig explains. “If you happen to take their object of worship away, that’s just your right, because you came from an industrialized civilization. There was never any question about that at all in the first film.”

With that in mind, Erb notes that there was no particular intended message being delivered about racial relations.

“When Cooper and Schoedsack were asked about King Kong, they always resisted interpretations of all kinds,” she said.

Michlig notes that the original Kong was a tight 100 minute run time and had a perfect three act structure: It starts in New York and follows a journey to the exotic Skull Island, where they face down villagers and capture the giant ape and then goes back to New York, where Kong breaks loose, wreaks havoc, and climbs the Empire State Building. The need to tell the story in an economic and exciting way may have led to more expedient — and less sensitive — plot points, with so much ground to cover. But more than anything else, King Kong was a distillation of an old school adventurer’s experiences and worldview.

“To Cooper, King Kong was all about his experiences — he’s even in a plane at the very end of the movie, as one of the people shooting down King Kong,” Michlig says. “He took aviation, exploration, weird and mysterious places, wild animals. He put it all together because he thought, ‘This is what adventure is.’ Then, just like Carl Denham in the movie, he said, ‘Oh, we’ve got to throw a dame in there.’ It’s very literal, that he just threw it in there because that’s what he knows people like.”

Erb concurs, noting that the movie was also a sort of summation of Cooper’s filmmaking experiences up to that point.

“Cooper always said the movie was about them and there was something to that,” the author said. “They worked together with [cinematographer] Marguerite Harrison (on 1925’s Grass) and [writer] Ruth Rose (on Chang), so they really were travel/adventure filmmakers going around the world with women making these movies. Beyond that, I think Cooper wanted everyone to just accept his ‘Beauty and the Beast’ theme at face value and not probe too much further.”

Kong was brought back for a quickie cash-in sequel released just nine months after the original. Son of Kong was not particularly good, or ground-breaking, and has largely been forgotten. A decade after World War II, his impact was felt in Japan, as the giant, city-crushing ape helped inspire the creation of Godzilla — a much more political monster, to be sure.

Then, RKO, the company that produced the two Kong films in the ‘30s, licensed out the rights to the character to Toho, the famed Japanese studio. Toho, showing extreme foresight sixty years before the current crossover franchise trend got started, pit Godzilla and King Kong against one another in a cheap, cultural battle royale. The melee required doubling Kong’s size, which to Michlig became a way of inadvertently dehumanizing the beast.

This rubbed Cooper the wrong way, as he believed he had the sole copyright to King Kong, and the incident sparked over a decade of legal action.

“There’s no relationship between that giant creature and a person; Godzilla, when he’s smashing buildings and stuff, people don’t exist to Godzilla,” Michlig noted. “He’s just this giant spectacle of a thing. He’s not going to stop and have a moment with some person. Whereas, the beauty of the whole King Kong thing was, for some reason or other back in 1933, they decided he’s going to be big, but we’re going to hold the line on the size.”

Dino De Laurentiis was, like Cooper, a showman. He put Italian cinema on the map after World War II and produced both New Hollywood classics (Three Days of the Condor), would-be blockbuster misfires (Dune, Flash Gordon), and horror movie sequels (Halloween II). In the early ‘70s, he decided to remake King Kong and boasted that they would create an incredible robotic monster that would be on the cutting edge of effects technology.

The producer wanted his movie to be lighter and more entertaining than the original, but it was also impossible to ignore the tumultuous politics of the era. Instead of an adventurous (and unconsciously racist) filmmaker, the leader of the expedition to Skull Island is a ruthless, ladder-climbing oil company executive, played by Charles Grodin. He promises his bosses at Petrox that he’s found a historic motherlode of oil on a mythical island and risks the life of everyone in his employ to get it.

An environmentalist professor (played by Jeff Bridges) sneaks onto the oil tanker bound for Skull Island; he is the group’s long-haired voice of reason and morality — which the greedy, heartless oil executive promptly ignores. But neither Michlig or Erb sees any intentionally pointed message in the story, which was written by Lorenzo Semple of Batman TV show fame.

“He was all about parody,” Michlig said. “That was just shorthand. We were in the ‘70s. Oil prices. Who are the bad guys? The oil companies because they’re squeezing us to get as much as they can out of us. It was just kind of easy.”

Erb added, “I got a vague sense Kong was supposed to represent the oppressed. Apart from that, it seemed they came up with a hodgepodge of themes intended to make the film seem more relevant to the times.”

On the bright side, the villagers were less blatantly barbaric, albeit heavily stereotyped in other ways.

In 2005, Lord of the Rings director Peter Jackson used all of his clout to finally make his dream project: a super-sized adaptation of King Kong that clocked in at over three hours long. He reverted back to the 1933 setting, but explored much more thoroughly the characters and showbiz themes that are glossed over in the original.

After creating one of the biggest movie franchises in history, and winning a load of Oscars just two years prior, Jackson took aim at the movie studios in his Kong. As played by Jack Black, Carl Denham is an off-kilter visionary; he has to resort to lying and stealing only when boring, conservative studio executives shoot down his grand plans to shoot an adventure film in a far-off locale. The pre-production of the LOTR movies was only a little bit less arduous.

Jackson’s King Kong traces the same journey, from New York to Skull Island and back, while trying to avoid the racial pitfalls that plagued the original. In the 2005 version, the natives on Skull Island have been marooned away from civilization for hundreds of years and have gone accordingly insane; they’re more like rabid ghosts haunting the exotic jungle than functional humans — violent and fanatical in worship of their gorilla god.

“There seemed to be a lot of intoxication going on,” Michlig said. “You could see very well that they once were a certain civilization. But now they’re locked up on this little, bitty corner of the island, and they can’t get the right food. (Though they can, obviously, get all those narcotics.) You can’t blame their actions on them. Their circumstances have made them what they were.”

By making the villagers victims of nature, Jackson was able to both play up their brutality but also excuse them from their actions.

In this weekend’s Kong: Skull Island, director Jordan Vogt-Roberts and his team of screenwriters went in the exact opposite direction. The islanders in the new movie are for the first time, passive and helpful, sheltering the newcomers who have crash-landed on the island. That the Westerners who arrive are still far more advanced than the villagers seems inevitable for the King Kong mythos, but not making them savage is a small corrective step, at the very least.

As the beginning of a longer planned franchise, it also has a chance to take the mythos in new, more progressive directions. Already, it rings an anti-war note, with Samuel L. Jackson as a Col. Kurtz-like military leader, leading his men to a certain doom. Kong is no longer the biggest villain — in fact, he’s the good guy.