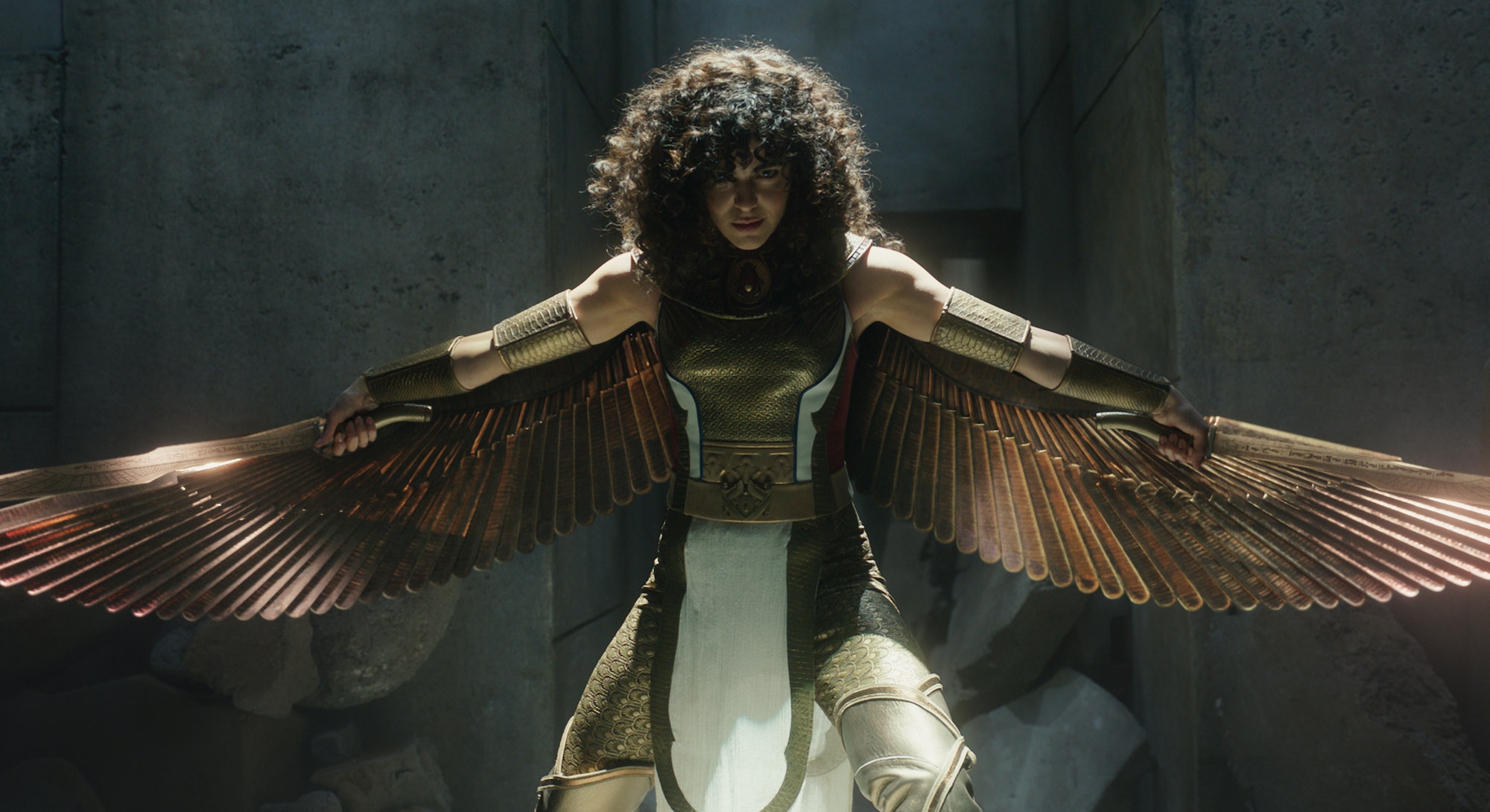 May Calamawy is still processing her Marvel debut.

“Being a superhero feels like you're truly stepping into yourself and allowing yourself to shine as you are,” she tells Inverse.

The Ramy actress plays Layla El-Faouly in Moon Knight, and in the show’s finale, she becomes Scarlet Scarab, the first Egyptian superhero in the Marvel Cinematic Universe.

“I know not everyone is going to look at Layla and go, I relate to that woman,” Calamawy tells Inverse, “but I hope she becomes a testament of being true to yourself because that's going to always be every single person's superpower.”

“So many people are sending me photos or telling me they're throwing their straighteners out and finally embracing their curls.”

Layla was introduced as Marc Spector’s (Oscar Isaac) formidable archeologist spouse, who, over the course of six episodes, was forced to come to terms with the existence of Steven Grant (Marc’s other personality). Then, of course, there’s Moon Knight — Marc’s vigilante alter-ego guided by Egyptian god Khonshu (F. Murray Abraham) — as well as the growing threat from cult leader Arthur Harrow (Ethan Hawke). To prepare herself for the show’s physical side, Calamawy underwent a serious training regimen.

As many fans will notice, this version of Scarlet Scarab is drastically different from the comics. The superhero was rewritten as a woman and, instead of following the aesthetic most female superheroes adhere to, Calamawy, who is of Palestinian and Egyptian descent, embraces her curly hair. Calamawy acknowledges the personal and cultural importance of maintaining it for the camera.

“I had so many people reaching out,” Calamawy tells Inverse. “So many people are sending me photos or telling me they're throwing their straighteners out and finally embracing their curls, all thanks to Layla. It helps me as well. I finally love my curls. Finally.”

Calamawy spoke to Inverse about the creation of Scarlet Scarab’s costume, where she’d like to see her character go next, and her thoughts on the complicated relationship between Layla and Marc Spector.

INVERSE: What’s next for Scarlet Scarab? Who from the MCU would you like to see her interact with?

May Calamawy: There has been nothing yet that I know of what could happen with Scarlet Scarab. But I love Dr. Strange, that would be cool. Blade would be cool because I've worked with Mahershala Ali and I think he's so wonderful. And then, I love all the women. I love Agatha. I feel like in the beginning, I used to love anyone that was kind of a villain like Nebula. I found them so complex. But honestly, it really depends on the story. I kind of want to be with all of them.

When researching Scarlet Scarab’s comic book history, did you learn anything that surprised you?

He was a true advocate for his country and a fighter for Egypt. He fought for what he felt was right and it didn't matter who it was that was crossing his path. It's pretty political when you read it.

Don’t forget about the superpowers.

It's funny because I wanted all his powers. He can zap strength from the different people he's fighting and take their powers. He can fly. I was like, “Guys, I want all of this!” I think they purposely wanted to keep Scarlet Scarab’s powers a mystery so they could be expanded on.

What did you find most challenging about stepping into the role?

From the physical perspective, it did get a bit tricky. By the second half, there was choreography that we just had to get through, whereas in the beginning, they were just trying to get the fear out of me with basic strength training, kickboxing, and knife work.

“Being a superhero feels like you’re truly stepping into yourself and allowing yourself to shine as you are.”

What does it mean to you to play an Egyptian superhero?

It's interesting. The hair is an aspect of what helps me get into character. I had told the head of hair and makeup that I wanted my hair to be left alone. It needs to be curly and it needs to be big. I also didn't want any heat on my hair. So they got me a hairpiece where the front is all my hair, and the back is the hairpiece and it really protected my hair. You cannot focus on continuity with curly hair. There's no such thing. If I just lay on it, it's going to look different the next minute. Whereas with straight hair, you can sleep on it, and the next day, they're like, this is great.

Some people may not see how much this matters, especially when you’re in front of the camera in such a high-profile project representing your own culture.

Being a superhero feels like you're truly stepping into yourself and allowing yourself to shine as you are. As an actor, I've had to do a lot of work to allow myself to pursue this and not follow certain norms that maybe people from my society at my age would already be conforming to. I had to really evaluate a lot and recognize how I wanted to live my life as opposed to how anyone else would.

To really step into what's true for me has taken a lot of courage. And, I know not everyone is going to look at Layla and go, I relate to that woman, but what I hope is that she becomes a testament of being true to you. Because that's going to always be every single person’s superpower.

Talk to me about the costume. How much of it was CGI? What was your reaction the first time you suited up?

Dude, those wings were so heavy. I had to walk around with them all the time. I'm kidding, they were obviously CGI.

Female superhero costumes can be really empowering, but there’s also the flip side that it just sexualizes a woman. And Mohamed Diab, the director, was very specific that he didn't want to do that. Also if Layla is going to fight, what is the most efficient way to do it while also looking cool? We found that in Scarlet Scarab’s costume. They flew over this artist Wilberth Gonzalez, and he painted everything on the costume. The detail was insane. It's gorgeous. I can't believe he did it all by hand. It felt like I was wearing this piece of art.

“It felt like I was wearing this piece of art.”

Did wearing it make you nervous, considering all the work that went into creating it?

Not nervous. But it was somewhat of a ritual putting everything on. It was first the leggings, and then the boots (and I couldn't put those boots on alone) and there were the arm braces, and then there was the main piece with the scarab that clipped it together in the back. And, of course, the knives.

Putting on the whole thing was an event. When I first put it on, I didn't really look at myself. I just walked on set and everyone's reaction to it was like, ‘Oh!’ and I was really bashful, like, ‘Oh my gosh, I can't believe I'm wearing this!’ That seems to be how I feel about this whole experience. I am feeding off of people's reactions, which I don't know if that's always healthy, but it's for the fans, really. I'm so happy that they are happy. And when I look at the costume, I really feel like it's a beautiful and very different costume.

“Wouldn’t it be funny if Layla was pregnant with Jake's baby?”

The last superhero married couple on Disney+ was Vision and Scarlet Witch in WandaVision, which didn’t end very well. How are you hoping the relationship between Marc/Steven and Layla will evolve, especially considering the post-credits Jake Lockley reveal?

Gosh, it's like there are three people in there!

We used to come up with so many jokes when we were rehearsing every episode. Like, wouldn’t it be funny if Layla was pregnant with Jake's baby? It just seems like we're gonna have to wait and see whatever magic comes if, and when, we get to continue this story.