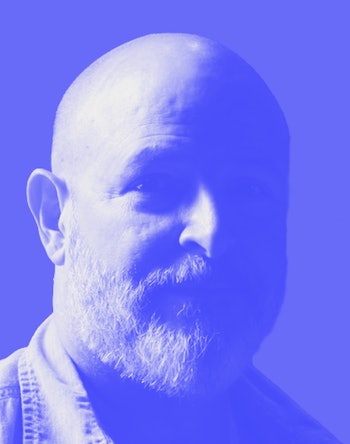 If you're a comic book writer working today, the ultimate goal is to see your creations brought to life in a big-budget movie with celebrities in skin-tight leather suits

Mike Mignola has lived that dream. The prolific artist and writer created Hellboy in 1993 for Dark Horse Comics (DC passed on his pitch) and has since spawned an entire "Mignolaverse" of connected superheroes and villains, along with three movies (two from Guillermo del Toro starring Ron Perlman and a third featuring David Harbour as the Hell-spawned anti-hero) plus multiple animated films, video games, and even a reference on The Simpsons.

You might think Mignola would be eager to ramp up movie production and build a cinematic universe to rival Marvel's, but that couldn't be further from his mind. He tells Inverse that "nothing at all" is in development from Hollywood at the moment. He's actually much more interested in returning to the basics.

“Lately, I’ve started to get the itch to try actually drawing comics again,” Mignola says. “I didn’t think that would happen. I sort of thought I was done with that so we’ll just have to wait and see how that goes.”

“Lately, I’ve started to get the itch to try actually drawing comics again.”

Inverse connected with Mignola in a rare interview to hear the macabre master reflect back on his fertile 35-year career, what he learned working as a concept designer on Disney's Atlantis: The Lost Empire, winning an Eisner Award with his seven-year-old daughter, keeping editorial control over the flourishing Mignolaverse, the creative rewards of dipping into the reflective world of watercolors, and why he’s not worried about competing with the Marvel Cinematic Universe.

You visited Disney Studios early in your career and saw legendary illustrator Paul Felix’s intricate concept art for their ambitious Tarzan animated feature. How did that affect you?

It was surreal being at Disney to begin with. I certainly never expected to find myself wandering those halls, and the walls were lined with pre-production art for the upcoming Tarzan, amazing stuff and a lot of it was by Paul Felix. When I saw that stuff my first thought was actually a little bit of panic, thinking “They know I can’t do stuff like that, right?” and “What the hell am I doing in the same building with a guy who can draw like THAT?”

As a production designer on Atlantis: The Lost Empire, what do you remember about your concepts and worldbuilding and how did you absorb the experience moving forward?

Atlantis was a great experience. Once I settled into it I had a good time. I had never really thought about “world-building” at the time (though I suppose I was sort of doing that in Hellboy) but that’s what was going on there. There was so much design work going on, stuff that would never make it into the film — like how the plumbing would work in the city of Atlantis (somebody really did figure that out) for a film that was NEVER going to feature the plumbing. I was a bit thrown by it all because, being a comic book artist, I was used to working relatively fast — you settle on your story and then design what you need.

But even the story was so fluid for so long. I remember one off-hand comment I made radically changed the last third of the movie. It was all just new and interesting. I probably could have worked on the film a lot longer, but I was well into the Hellboy stuff by then so I only worked on it a few days at a time. I remember doing a pile of drawings that really did a lot to establish the look of the city—I drew probably all those in just a couple of days. I think the artist who did that diagram about the plumbing probably spent more time on it than I did on the whole city.

In 2002 you teamed up with your daughter Katie for the Eisner-winning The Magician and the Snake. What was the experience like seeing that creative spark, and would you consider teaming up again in the future?

When Katie told me that Magician And The Snake story I was actually a bit stunned. It seemed to come from nowhere. I can still point out where we were on Seventh Ave in New York when she told me the story. I don’t know that she’d made up any stories before that, at least she’d never told me any. After we did that one together I do seem to remember trying to get her to come up with more, also tried to get her to do artwork, but nothing really happened. She’d already set her mind on being a veterinarian so I guess it was just a magic one-time thing.

In summoning up a singular vision for the Mignolaverse over the past 25 years, what is the biggest challenge in maintaining cohesive control?

About control… I guess picking other writers that you know and are comfortable with, writers who understand and respect your vision. I was very lucky with John Arcudi and Chris Roberson, and Scott Allie who held the whole thing together as editor long before he started actually writing stories.

When selecting writers and artists to collaborate with on various projects, what variables do you look for first?

The trick has been to use a small group of writers and give them a lot of room to roam around with their stories, so they get to do what they want to do, but keep the stories moving in the general direction I imagined. At least, that’s how the Hellboy stuff has worked — the stuff with Chris Golden (Baltimore and Joe Golem) is a bit different as we very much co-created those. To a large extent, I knew how to start those things, but Chris was the one to figure out where they were going.

Do you have a specific routine or regime you employ when tacking new ideas?

When did you first encounter the weird world of horror author H.P. Lovecraft and how did it help forge your signature style?

Lovecraft… late ‘70s, early ‘80s, my brothers and I spent a lot of time in Berkeley prowling through all the used book stores. I discovered a lot of guys during that period. I was introduced to Robert E. Howard through the Conan comics, learned about the old Weird Tales magazine where those stories originally appeared, and so part of my mission in those days was to seek out the other authors — like Lovecraft — who were published there.

What aspect of any Hellboy spinoff series — like Witchfinder, Baltimore, Joe Golem, Lobster Johnson, or Crimson Lotus — are you most satisfied with?

That’s an easy one — the thing I’m most proud of is how everything fits together. For 25 years we’ve been telling these stories, filling out the history, and expanding this world; and I think everything all fits really well. I can’t think of any storylines we’ve done that did work, but that we have to ignore or caused a continuity problem. 25 years and we’ve never had to reboot our world.

“25 years and we’ve never had to reboot our world.”

You’ve said before that Conan the Barbarian creator Robert E. Howard’s muscular prose and storytelling inspired you. Which of his characters or stories do you relate to most and why?

His stuff has been an inspiration since I started reading him in high school. I think the way I’ve chosen to tell the stories — mostly a mix of stand-alone short stories and longer novel-length stories rather than one long-running series (still mostly the comic book standard when I started Hellboy) — owes a lot to how he and others wrote for the pulps. And my favorite Howard characters, Conan and Solomon Kane, mostly wander the earth, running into trouble along the way. That was very much the model for Hellboy.

Do you enjoy the historical research process and what are some of your go-to guides for reference?

I enjoy research up to a point, and usually more mythology and folklore rather than history. I do enough fact-checking of history to make sure I don’t make big mistakes, but for the most part, I come up with stories and then do research to add detail—names and places, magic spells, etc. I’ve always read a lot, so a lot of stuff is rattling around in my head from all the stuff I’ve read, enough to usually put some kind of story together on my own. And I have a huge home library, so research is usually a matter of going through my books muttering, “I know I read something about this somewhere, but where?”

Midnight Circus was a sensational mood piece that resonated strongly with Hellboy fans. What is it about that particular fairy tale-type book that inspired you?

I am very inspired by fairy tales and folklore and have read enough of that stuff that I think I have a feel for them. In the case of Midnight Circus, I was more inspired by a couple of books that I fell in love with when I was young: Pinocchio — reading that was as huge for me as Dracula. — and Ray Bradbury’s Something Wicked This Way Comes. Banging those two books together in my head pretty much just created Midnight Circus. That was an easy one.

Of all your Hollywood projects in development, which ones are you most anticipating?

Right now, nothing at all is in Hollywood development — which is fine as my focus is always on the books. Hollywood means giving up complete control, which is not always easy when you’re used to having final say on how your stories turn out. It is a challenge, and when it’s going well, I do like the collaboration. But it's tricky.

After a staggering 80 volumes of work amassed, what arena is still unfulfilled for you and where do you see your craft ten years down the road?

I can’t think 10 years down the road. Right now I’m enjoying painting and plan to continue that, just mostly painting for myself — for fun not for publication. But I’m also looking forward to writing a new series or two, continuing on from Hellboy in Hell and Koshchei the Deathless. Lately, I’ve started to get the itch to try actually drawing comics again. I didn’t think that would happen. I sort of thought I was done with that so we’ll just have to wait and see how that goes.

What has watercolor painting done to soothe your soul and how does it translate or transition into other facets of your life and art?

About the paintings — It’s taking a while to really wrap my brain around what those are all about. After so many years of doing things for publication, thinking everything has to ultimately be collected into a book, it’s actually a whole new thing doing stuff just because I want to do it — getting back to making art just to be making art, doing stuff just for me. I guess maybe this is what it’s like to have a hobby.