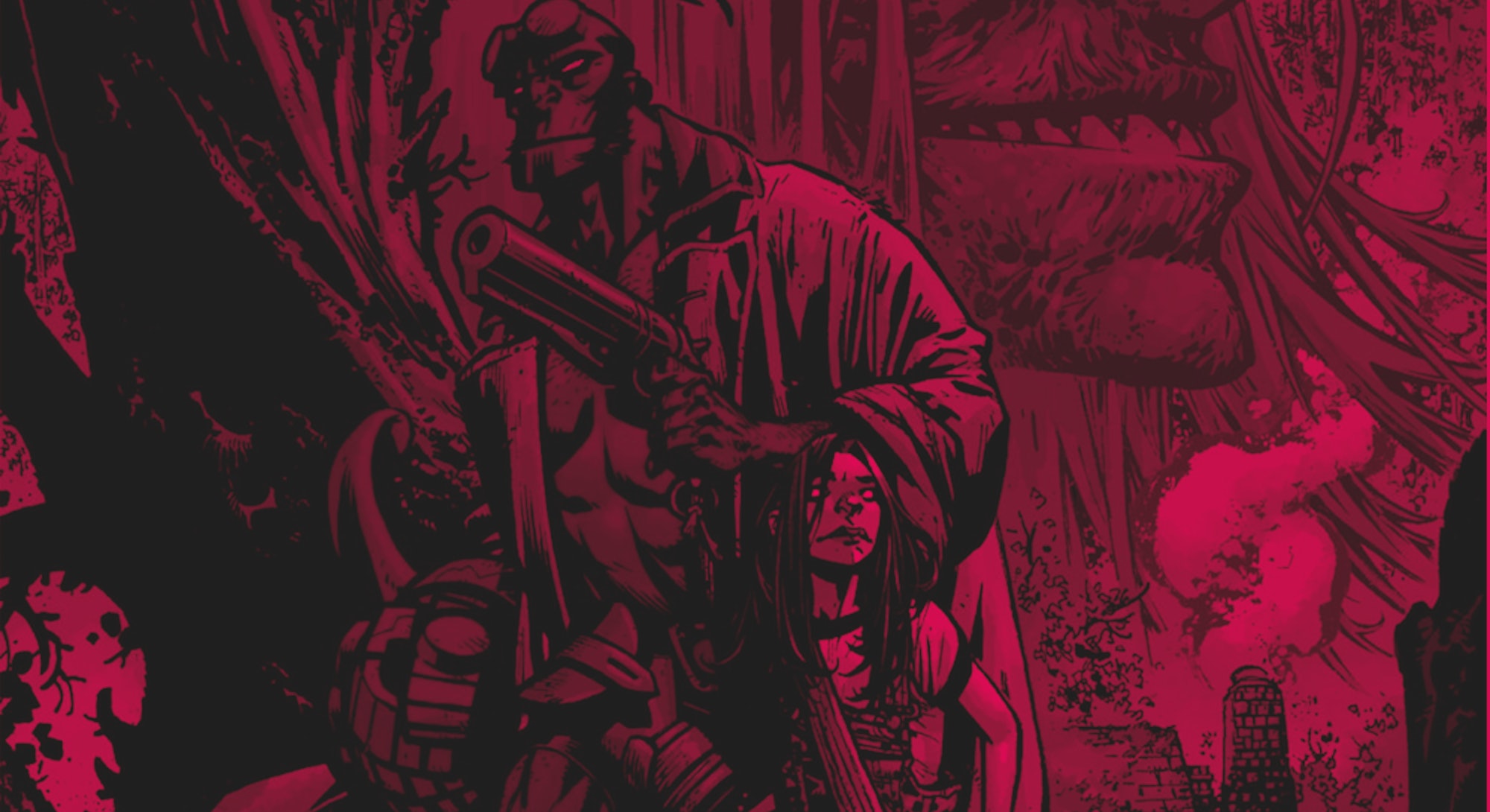 Lurking deep in the heart of the Appalachian woods of 1958, Mike Mignola's The Crooked Man, is one of its creators' best-loved stories in a quarter-century of work.

Its title loosely inspired by an 1842 children's nursery rhyme of the same name composed by James Orchard Halliwell, this Eisner Award-winning Hellboy fable was originally published as a creepy 3-issue miniseries by Dark Horse Comics back in 2008 and can be experienced in its totality in Hellboy: The Complete Short Stories Volume 1.

Paired with celebrated artist Richard Corben (Hellboy: Makoma, Punisher: The End), Mignola's bewitching horror yarn begins in the mountains of Virginia and revolves around a duplicitous demon known locally as The Crooked Man. Hellboy bumps into a cursed man named Tom Ferrell who's sold his soul to the sneering creature, and together they attempt to locate the ramshackle abode of the backwoods beast to try and save Tom's damned soul.

"Even as I was writing The Crooked Man, I knew I wanted to return to those mountains and see Tom Ferrell again, and those Melungeon witches," Mignola tells Inverse. "But The Crooked Man turned out to be pretty much my favorite Hellboy story — I was happy with what I wrote and really thrilled with what Richard Corben did with it, so I thought best to leave it alone.”

But now, in direct reaction to that iconic story's popularity, a spirited new two-part sequel is brewing titled Hellboy and the B.P.R.D.: The Return of Effie Kolb. The first chapter arrives February 19 and includes atmospheric panels by Eisner-nominated artist Zach Howard and the mystical talents of award-winning colorist Dave Stewart and letterer Clem Robbins.

“Sometimes you just have to wait till the right artist comes along.”

“I stopped thinking about it until one day I stumbled across a really nice drawing of Hellboy by Zach Howard,” Mignola says. “I looked around online and found a bunch of Zach's pages with amazing tree drawings and that’s all it took—I was right back there in those haunted woods and the story just started writing itself. Sometimes you just have to wait till the right artist comes along.”

Picking up in 1967, nine years after he vanquished the malevolent entity called The Crooked Man, Hellboy heads back to Appalachia when a young psychic warns Tom Ferrell of more simmering evil. However, the hillbilly demon’s mansion is no longer empty, and threats both new and old fester in that shadowed forest.

Getting a jump on the sequel's release next week, Inverse is ushering in a special 5-page preview of the debut issue, alongside a special chat with its impressive artist, Zach Howard.

Inverse: What was your first reaction when Mike Mignola asked you to come aboard the follow-up to his and Richard Corben's original 2008 miniseries?

Honored. It can be intimidating to stand in the shadow of a legend, much less two, but I have one hell of a chip on my shoulder and a toolbox full of sharpened instruments. I was ready. And I’m at my best when nervous. I wasn’t going to let Mignola down. No matter what.

“I wasn’t going to let Mignola down. No matter what.”

Why does The Crooked Man resonate with you as an artist and what mood and tone did you hope to conjure up in this sequel?

It’s Hellboy. Mignola is the most profound sequential artist of my lifetime and my most direct influence. However, I straight-up shit the bed with poor skills the first time I drew Hellboy for Mike, and I needed another crack at it to right the ship and complete my career.

My mood and tone are the same as usual. My work lends itself to dark, intense stories and it was easy to adapt the script into my line of production. Hellboy, fortunately, fits me like a glove.

I had just finished a Cape sequel that took place in a similar setting, and I was rather well-versed in drawing the environments. I could then just concentrate on putting my juice into the characters and story. I’m a huge Miyazaki fan and his coming-of-age stories. Mignola gave me the lovely character of Sarah to sate that story desire.

What was the collaboration like with Mike Mignola and Dave Stewart and how did the eerie Appalachian environment stir your creative impulses?

To say that it’s invigorating to collaborate with Mignola would be an understatement. I, for the most part, give zero shits about what other people think of my work, but I’d be a liar if I didn’t admit to being nervous about wanting to succeed with his IP. Fortunately, Mike wrote one hell of classic Hellboy script and gave me tons to work with.

Learning to draw Hellboy was the most difficult part, though. He’s such a uniquely constructed character–a pure expression of how Mike draws. I think most artists fail at interpreting his genius. Watching these artists just go about their ho-hum commercially driven production style while drawing him is a reflection of how apathetic this industry is about sequential art and true achievement.

The US comic book industry is basically equivalent to fast food. Make it fast, cheap, and lacking in any notable nutrition. Hellboy is a fucking 5-star-rated epic meal–a brilliant character. If you bring your Arby’s Roast Beef Microwave Cook mentality to something that needs thoughtfulness and finesse, you get a polished turd at best. And most likely a Hellboy with lips. Hellboy needs a chef that is willing to plan, prepare, and do the work.

Part of the magic of this IP is the magic of how Mignola draws his sequential work. The wonderful universe that he created is directly tied to how he visually expresses himself. So the burden of an artist who is interpreting his genius is to find those elements and bring them into your style. He’s too potent of a creator to ignore this. So that is what I went about doing. Successful or not, I certainly tried.

I didn’t work with Stewart directly, but it’s a profound privilege to have my crap colored by him.

The Appalachian forest has all the elements that kind of show off what I’m good at–dark, dense, oppressive volumes. I can layer foliage as needed, create directional panel progressions easily, and provide substantial texture options. Endless ammo for storytelling with a setting like this.

You've stated that this will be your final gig as a sequential artist. How did that factor into this grand finale with your style and design choices?

Well, I have a love affair with sequential storytelling and have no plans of stopping that, per se. However, I’m pretty certain that I don’t fit into the US comic book industry in any way that brings me sustained happiness.

I’m tired of working countless hours for those that just see me as a Golden Goose, and of being thrown away if I don’t perfectly fit their brand of hubris. I respect the medium too much to be generally compatible — but it’s important to note that this is my fault and not the industry’s. It is what it is, but I know that I just bring chaos to the poor people that have to work with me. It’s not really fair to anyone.

I am leaving the industry as an interior artist. I’m not bleeding for anyone but myself from here on out. I don’t care if I have to sell my books out of the trunk of my car, but it’s just me and my muse now. Everyone else can play King of the Shitheads and give each other trophies. I’ll be in my lab.

How did this factor into Hellboy? I started my career with Hellboy and now I get to hang my damn hat on it. This is a special opportunity and I’m bringing 100% of my ability to every single line of every single page until either I reach my goal or my fingers fall off. Where that lands me, I suppose the Fates will decide. But I’m going down swinging like it’s my fucking Rocky moment. Cue “Going the Distance” by Bill Conti.