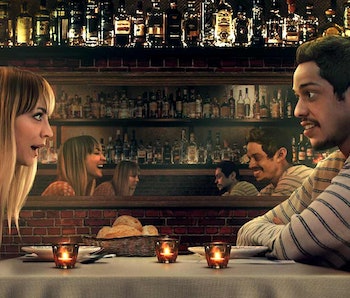 Peacock’s latest original movie, Meet Cute, poses the question everyone from Ariana Grande and Kate Beckinsale to Kaia Gerber and Kim Kardashian may have asked themselves. If you could, would you go back in time and relive your happiest moment with Pete Davidson? For Kaley Cuoco’s neurotic New Yorker, the answer is definitely (and obsessively) in the affirmative.

The Big Bang Theory alum plays Sheila, a production assistant we first see chatting up Gary, Davidson’s graphic designer, at a crowded sports bar. He’s an unassuming twenty-something more interested in doodling on beermats than watching the soccer game gripping most other patrons. Initially, their conversation is stilted and awkward. “Thirsty? For a drink, not sexually,” she stutters. Still, Sheila knows that however labored her chatter is, she’s about to have the night of her life.

As she soon reveals, Sheila has experienced this exact evening before. While getting a salon manicure, she stumbled across a tanning bed that doubles as a time machine. And instead of using it to change the course of history, she repeatedly rewinds the clock by just 24 hours.

“I don’t have to be perfect... By the end of the night, we are always on cloud nine,” she reasons to Gary, who doesn’t believe a word but plays along anyway. “Do you know John Connor?” becomes one of his regular questions.

Proving herself a creature of habit, Sheila doesn’t even change their itinerary. The pair always head off to the same Indian restaurant, take the same boat ride to reminisce about random childhood memories, and enjoy the same hipster ice cream joint that soaks its milk in Fruity Pebbles. Their dates also always end on the same sour note: Gary making his escape after Sheila takes the time machine talk a little too far.

Sheila’s reluctance to move past the safety net of their first date proves Meet Cute isn’t your standard time-looping rom-com, a subgenre that’s enjoyed a renaissance thanks to streaming hits like Palm Springs, When We First Met, and The Map of Tiny Perfect Things. Director Alex Lehmann has quietly established himself as a leading figure of the post-mumblecore scene — see the monochromatic love story of Blue Jay, the poignant friendship tale of Paddleton, and recent intimate father-daughter two-hander Acidman — and his qualifications serve him well here.

It’s little surprise, therefore, that Lehmann’s fourth work of fiction (he also helmed the inspiring documentary Asperger’s Are Us and its TV spinoff) is largely free of groan-worthy contrivances and larger-than-life romantic gestures. Although the set-up is far more fantastical than his previous efforts, the drama that unfolds is still grounded in reality. Gary and Sheila interact like relatively normal humans, with the leads presumably given the go-ahead to improvise their way around Noga Pnueli’s astute script.

Davidson has certainly never been more charming away from the Saturday Night Live set. His previous starring vehicles, the self-indulgent The King of Staten Island and boorish coming-of-age Big Time Adolescence, did little but play upon his stoner man-child persona. But Davidson’s demeanor here sees him finally match the vulnerability of his famous puppy-dog eyes. You can perhaps understand why Sheila, and apparently the entire female population of Hollywood, are so smitten.

Cuoco has a much trickier role. Not only does she have to flutter her eyelashes enough to make her affections reciprocal, but she also has to sell Sheila’s cocktail of depression, childhood trauma, and bunny boiling mania while still remaining sympathetic. Luckily, Cuoco is up to the job, summoning the same frantic energy and comic timing that made The Flight Attendant one of last year’s must-watches. And there’s a streak of black humor that runs through Meet Cute, from the fact that Sheila must fatally run over her old self each time she restarts the day to her downright icky attempts at correcting the course of her date.

But as is often the case with time-jumping movies, Meet Cute loses its way a little when it tries expanding on its simple concept. Although initially content to laugh at the same Sophie’s Choice jokes and hear the same dead dad stories, Sheila eventually begins to question her self-enforced déjà vu (“Even a perfectly good steak starts to taste like sh*t when you eat it every day”). By the halfway point, Meet Cute is betraying its own rules, however arbitrary they may have seemed. And while this narrative shift takes Sheila’s meddling to insane heights (and gives the deadpan salon owner played by Deborah S. Craig, the only other cast member with more than a few lines, the chance to steal a scene), it ends up tying the film into frustrating knots.

Nevertheless, Meet Cute’s hangout vibes, naturalistic performances, and air of melancholy mean it still works as a rom-com for people that don’t normally like them. It also lives up to Lehmann’s acclamation of “the most honest tanning bed time-machine New York romantic comedy you’ll ever see.”

More like this
Culture
23 hours ago
35 years ago, the most obscure sci-fi movie tried (and failed) to redefine alien cinema
By Jon O'Brien
Entertainment
1 minute ago
Vesper is a breathtaking sci-fi warning about our real-life future
By Eric Francisco
Entertainment
Sep. 13, 2022
With Pearl, A24 perfects its first horror franchise
By Andy Crump
Related Tags
Share: