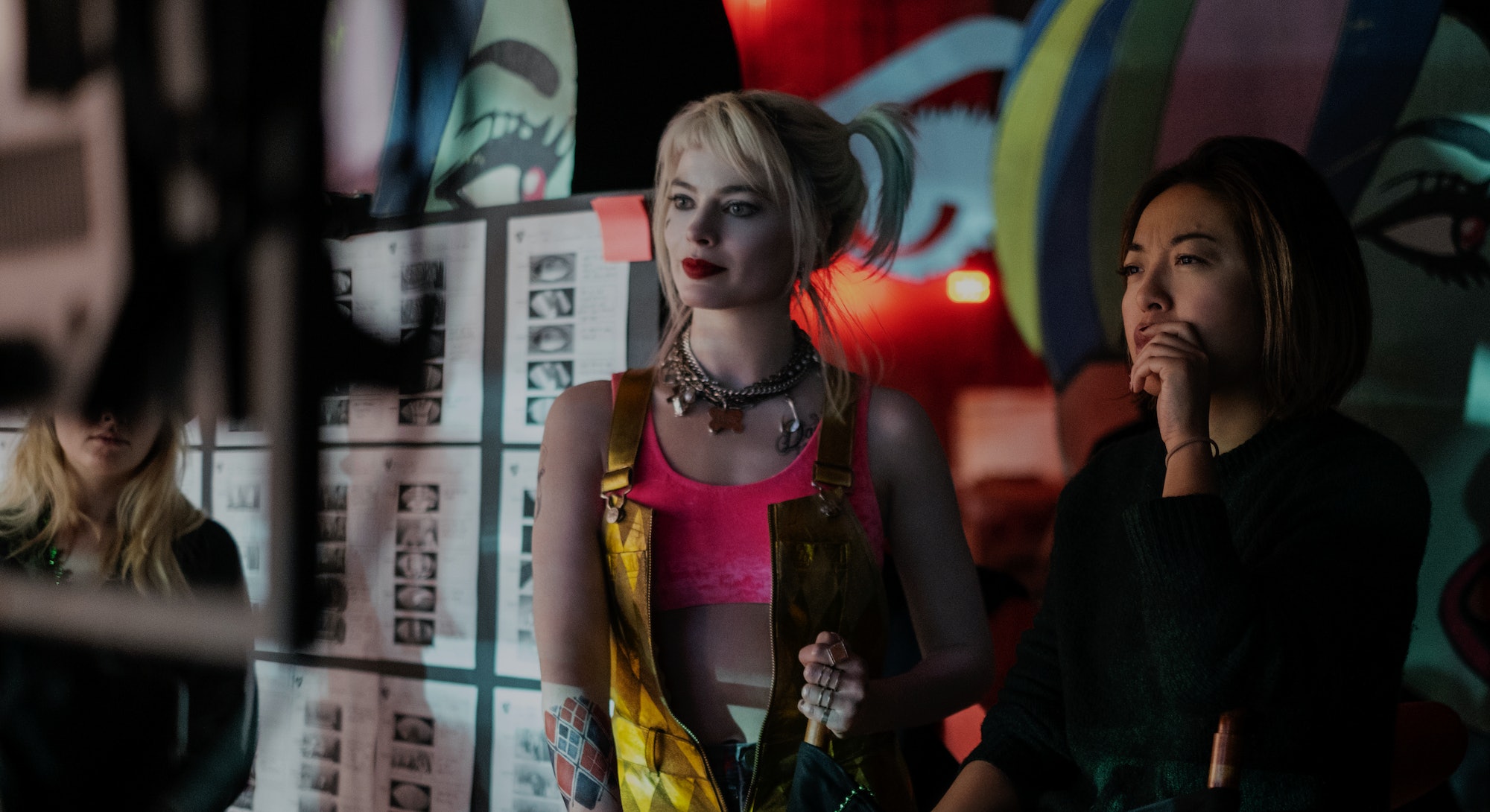 "I always loved Catwoman," Yan tells Inverse. "The best villains in comic books have that layered humanity to them. I always loved the world of Gotham because I thought it was a little darker. More realistic. A little more human."

On the surface, her new DC movie Birds of Prey (and the Emancipation of One Harley Quinn) is anything but dark, with its candy color visual palettes and loud costuming. The ensemble cast of women unsettles the typically testosterone-fueled superhero space with imperfect protagonists Yan describes as "raw and real." The movie's arresting style and unapologetically female gaze was the fruit of a creative partnership on both sides of the camera.

"That was something I wanted to focus on in Birds of Prey, women that felt imperfect," Yan says. "They don’t have to be perfect. They really don’t. That makes them more accessible and relatable. They can still be superheroes."

In theaters Friday, Birds of Prey is the newest installment of the DC cinematic universe. A loose sequel to 2016's Suicide Squad, it follows fan-favorite villain Harley Quinn (Margot Robbie), reeling from her breakup with the Joker. In pursuit of a diamond containing bank passwords to a vast fortune, Harley rises from zero to hero with a clique of ass-kickers: club singer Dinah Lance (Jurnee Smollet-Bell), vigilante Helena Bertinelli (Mary Elizabeth Winstead), police detective Renee Montoya (Rosie Perez), and teenage pickpocket Cassandra Cain (Ella Jay Basco), all plucked from the pages of the Birds of Prey comics.

You don't see directors like Cathy Yan often. A Chinese-American artist, Yan enters the marketplace of superhero film in a time when it's still dominated by men. Her path to filmmaking is an unusual one, too. Born in China and raised in Hong Kong and Washington D.C., Yan graduated Princeton University with a degree in public policy in 2008. Her summer internships placed her at a fashion magazine, and she was also a creative director for Princeton's hip hop dance group diSiac for three years.

"There’s not that much of a difference between choreographing and directing,” she told Princeton's alumni newsletter in 2018.

After undergrad, she became one of the youngest reporters to ever write for The Wall Street Journal, often covering the arts, Asia, and the spaces where they overlap. In May 2011, Yan explored the 2,500-acre Hengdian World Studios, also known as "Chinawood," a huge filmmaking village several hours away from Shanghai.

Reporting on Chinawood doesn't normally get you to Hollywood. But working as a storyteller, Yan saw similar characteristics in both disciplines. "I think that journalism and movies aren’t so different," she told MarketWatch in 2018. "You’re trying to tell a story and figure out the best way to tell the story to engage with the audience."

In 2013, Yan began making movies, starting with her short Last Night. Five years, more shorts, and a dual MBA/MFA degree from NYU later, she helmed her first feature. The black comedy Dead Pigs focuses on a clash between Shanghai residents sparked by thousands of porcine corpses floating down the river. Coincidentally, Yan was inspired by a story she read in a newspaper.

Birds of Prey is Yan's second feature, and her biggest by a wide margin. Budgeted at $97.1 million (modest for superhero films), Birds is the long-awaited solo vehicle for Harley Quinn, beloved for her rebelliousness and chaotic humor. First introduced as a sidekick for the Joker in the Emmy-winning TV show, Batman: The Animated Series, recent artists have re-evaluated Harley Quinn. Fans and writers seem to like her when she's not with the Joker, lately the avatar of white male rage.

"I really came to love Harley Quinn," Yan says. "Harley is such an interesting, complex character and I think that especially with Margot Robbie playing, she’s endlessly watchable and unpredictable and exciting."

Birds of Prey began as Robbie's passion project. It was a film she personally pitched to Warner Bros. after discovering the diverse DC heroines who hadn't yet leapt to the big screen. Yan was hired to helm the film in 2018, where Deadline called her a "bold bet" after beating out "numerous well established male directors."

But while Birds of Prey happened because of Margot Robbie, it was Cathy Yan who called "action" on set. So are Robbie and Yan a dynamic duo, or do they operate like hero and sidekick? Yan says it's the former.

"I definitely think it’s a partnership," Yan says. "Margot was very, very involved as the producer and the star. I respected that she’s played Harley Quinn before. I defer to her sometimes, like what she thought Harley would do [in a scene]. I do that with all my actors because that's their job. They understand their characters and become experts. As a director, I also have to be an expert at a lot of other things. It's always a collaboration."

She adds, "We played around. I encouraged her to try things, to take risks and make interesting choices. At the end of the day, why not? If it doesn't work, we don't have to use it. If it does, it's magical."

Birds of Prey has already sparked broader conversations about how women are typically depicted in blockbuster superhero movies. Last year, when costume test footage from the movie dropped on social media, Vanity Fair writer Joanna Robinson made a comment that went viral: "I can’t always exactly explain the difference between the male and female gaze, but I do know it when I see it."

When I ask Yan about the point of view for Birds of Prey, she says, "I think it was more like a Cathy Yan gaze. Without sounding obnoxious about it, but it was intentionally reactionary."

She adds, "Certainly we had male cameramen. But the environment we created was about celebrating these women and making them feel comfortable. Shining a light on characters who are not perfect and aren’t there just to be objectified. That was never the intent of the movie even as written.

"It was less deliberate what gaze it was and more like, how can we do things differently? How can we honor these characters? How do we make our actors feel confident, empowered, and sexy? I think that's powerful for any young girl to see."