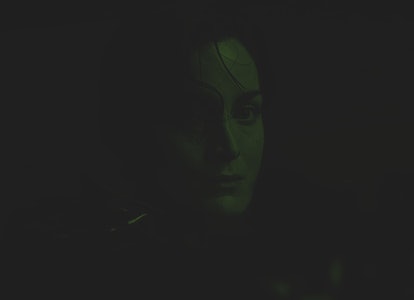 The Matrix 4 could change everything we think we know about the franchise — including classic characters, like Carrie-Anne Moss’ Trinity.

The long-awaited fourth installment in the Matrix franchise is set to hit theaters later this year and will be bringing back Moss’ Trinity, Keanu Reeves’ Neo, and other characters from the first three Matrix films. When it was first announced, the news that Neo and Trinity would be returning in The Matrix 4 was met with both excitement and confusion from fans of the franchise, since both characters died at the end of 2003’s The Matrix Revolutions. But one new Matrix fan theory may reveal the explanation for Trinity’s resurrection in the upcoming sequel.

The Theory — A new Reddit post from u/PhaedraAmericana speculates that The Matrix 4 will reveal that Trinity was never actually a real human being, but just another program in the Matrix.

According to the theory, The Matrix 4 will reveal that the “real world” seen in the first three Matrix films was actually a second version of the Matrix all along — a theory that fans of the franchise have been speculating about for some time now.

The theory goes on to argue that the sequel will also reveal that Trinity is actually a program designed by the Oracle to specifically fall in love with The One (Reeves’ Neo). If true, Trinity was designed so that she and Neo would fall in love and he would make the pivotal decision to save her life in The Matrix Reloaded, which leads to him forming a truce with the machines in The Matrix Revolutions.

The Redditor also argues that Trinity’s existence as a program created by the Oracle explains her death in Revolutions. The theory posits that Trinity died because she had already served her function of tethering Neo to humanity and escorting him to the Machine City and because her death made it easier for Neo to ultimately sacrifice himself at the end of Revolutions.

Trinity’s Return in The Matrix 4 — Very little is known about Matrix 4’s plot, so it’s difficult to know what will happen in the sequel or how it will pick up where the original Matrix trilogy left off. For what it’s worth, though, this theory does offer an exciting explanation for how Trinity will return in The Matrix 4.

If the character really is just a program created by the Oracle, then there’s little reason to believe she couldn’t be brought back after her “death” in The Matrix Revolutions. Should the “real world” shown in the Matrix trilogy really turn out to be just a second version of the Matrix, then that means Trinity and Neo’s mission to free humanity from the Matrix isn’t complete yet either. That, in turn, would explain why both characters are returning for the sequel.

Trinity being a program offers up plenty of exciting dramatic questions for both she and Neo to have to grapple with in The Matrix 4 as well. It’d be an interesting way for The Matrix 4 to further explore the relationship between humanity, technology, and free will that was at the core of so much of the first three Matrix films. After all, if Trinity was merely programmed to fall in love with Neo, then what does that say about the authenticity of their relationship?

The Inverse Analysis — The Matrix 4 has the potential to live up to the original’s legacy in a way that many fans believe the franchise’s second and third installments didn’t. There’s no way of knowing right now if it will or not, but there’s plenty of room for the sequel to surprise fans and rewrite the franchise’s past mistakes in some pretty big ways. And it’s difficult to imagine a bigger twist that The Matrix 4 could provide than the realization that one of the franchise’s core characters was really just a program all along.