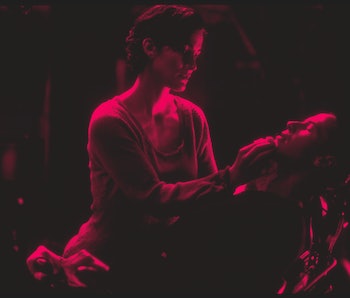 Production on The Matrix 4 is currently underway, and as more set footage comes to light, the movie's undisclosed plot becomes all the more confusing. Neo and Trinity are clearly alive in the upcoming installment, though they both met their demise in The Matrix Revolutions, the third movie in the franchise. However, a fascinating new theory offers a compelling explanation for how Neo and Trinity are still kicking.

While a previous theory suggested the characters were somehow still inside the Matrix, Reddit user dinguschungus makes a pretty convincing case for how The Matrix 4 may have kept Neo and Trinity alive without retconning the events of The Matrix Revolutions. The gist is that the fourth film is not a direct sequel to any of the previous films. Rather, The Matrix 4 is a prequel of sorts.

The Matrix Reloaded, the second film in the franchise, established that the fake reality, along with the people inside it, can be reset. In fact, the version of the Matrix in the original films had already undergone numerous resets before we were introduced to the world and its characters, with Neo and Trinity's memories having been erased each time it started over.

With that in mind, the theorist suggests The Matrix 4 might include a version of Neo and Trinity “who existed at a different point in the Matrix’s timeline… and grew to middle age before finding out about the Matrix.”

The theory makes a lot of sense. Neo was told that he wasn’t the only Chosen One to have ever existed within the Matrix: a new one emerges every hundred years or so. That’s in line with the idea that the Matrix films had been reset several times already. It might also help to explain why the filmmakers were reported to be searching for an actor to play a younger version of Morpheus.

While there may have been other chosen ones within the Matrix, it’s possible all of them were simply different versions of Neo. After all, the Architect never said that the Chosen One couldn’t be the same person at every reset. Neo would still be the Chosen One, he would just be a new iteration of the character in a new timeline. Alternatively, this theory also speculates that Matrix 4 could focus on the original Neo and Trinity characters from before the Matrix was created.

That said, it’s possible that the Neo and Trinity in The Matrix 4 are simply the result of the Matrix system “creating repeats of the people it originally enslaved,” as dinguschungus puts it. The idea has legs since it’s rooted in the previously established canon, and would help explain why Neo and Trinity have aged and evaded death in the new film.

While we’re still a ways away from learning more about the upcoming sequel, the idea that it could be set in a wholly new Matrix timeline offers a fresh and unique spin on an old franchise.